These Boots Are Made For Walking!

Yesterday morning, Linda T. and her daughter came out to walk dogs! They drove three hours to get here, and we were glad to see her, and meet her beautiful daughter, Hunter! They showed up with some homemade cookies, and chocolate covered, peanut butter balls for Aaron, Kinky, and Tony and me! Talk about delicious! OMG, they were fantastic! Seriously, look out Reese’s Peanut Butter cups—you’ve been outdone!

After a brief visit outside, Aaron, Linda and Hunter started walking our dogs! I loved it, but not as much as our dogs did! After fifteen of our dogs had been walked, Aaron went home for lunch, and I took Linda and Hunter over to meet and to visit with Kinky. And, it was a lot of fun!

When we returned to the rescue ranch, Aaron showed up with his girlfriend’s daughter, Heather and her friend, who also wanted to help walk our dogs. I loved it! The more the merrier! By the end of the day—over twenty dogs went for walks! Thank you, Linda, Hunter, Heather, Carol and Aaron—Y’all Rock!

This morning, Tony and I went to Kerrville to shop for our dogs—Christmas dinner, and to run a few errands—like buying presents for each other, and getting me some new cowboy boots. My old Justin Ropers boots, are over thirteen years old, and they are worn out.

We went to a cowboy western store first, and after trying on several cowboy boots, I gave up—they either didn’t have my size or the ones I liked were on backorder. So I gave up. We went to Wal Mart and filled a basket full, of people food, for our dog's annual Christmas dinner! Then we came home.

Around three o’clock, our friends, Matt and Jody, arrived to drop off their dogs, Toby and Baby, that they adopted from us months ago! Before making their adoptions final for Baby and Toby, we agreed to board their dogs for four days, during this year’s holiday season to make the adoptions happen—and we kept our word.

When they arrived, Toby and Baby quickly jumped out of their truck, without leashes, and they ran straight to their old pen, which Tone and Aaron had made ready for them! I couldn’t believe it! Tony opened the gate to their old pen, and they ran in and quickly started smelling and rolling in the dirt and grass—they were happy, with tails wagging—they were home, again! We were all astonished that they remembered their old pen, and that they were so happy to be back! And yes, I loved it! I took it as a compliment.

Earlier this evening, my sister Cindy called to visit! She called to tell me that, this morning she and her husband Ray, had spent their morning wrapping presents, and then they left the house to run errands, leaving their two Boston Terriers, Tipper and Maisy, inside. Two hours later, when they returned home— they discovered that their dogs had opened up only one present—theirs! Cindy said that all of the other presents under their tree, were untouched, but their dog’s present had been totally torn up—with gift wrap paper everywhere! We had a fun conversation, and during our catching up, I found out that her son, Tom, who helped Ronnie build Outer Space for us, was now working at a cowboy store in Austin, and he was a cowboy boot salesman, working on commission! How perfect is that! Cindy wasn’t sure which store he was working at, so I called Ronnie to find out.

After the receptionist answered the phone, I asked to speak to Tom in the boot department.

“Hi Tom, this is your aunt Nancy—Cousin Nancy,” I said. “I need some new cowboy boots, and I want to buy them from you—so you’ll get the commission. I’ve already been online, and I have the codes for the boots.” Then their was silence.

“Wow, let me check with the manager to see if that will work!” Tom said, before laughing. Then he put me on hold for a couple of seconds. “The store manager is okay with it. Which boots do you want to buy?”

I told him that I wanted to buy the premier Justin Ropers, and the new Justin Gypsy cowgirl boots—the pink ones!”

“Yes, they are Peptol Bismol pink.”

“Okay, let me check to see if we have them.” Tom put me on hold, but not for long.

“Nance, I have good news and bad news. We have the pair of Peptol Bismol, but we are out of stock on the Ropers.”

“Okay, that’s fine.” I gave Tom my American Express information. “Thank you, Tom. If you don’t mind, please take them over to Cindy’s Wednesday or Thursday, when you see them, and please tell Nicky that I said hi. Y’all need to come down for a visit, and please bring her parents.”

“ I will. Wow, Nance! You really freaked me out! I am trying to sell cowboy boots, and they announce over the loud speaker—Tom please pick up the phone. Then I pick it up and it’s you. I’m thinking why is my aunt calling me at work?” Then Tom started laughing and I joined him.

I then called Cindy to tell her about buying the boots from Tom.

Two minutes later, Cindy calls me, and tells me that Tom had just called her, and the store needed to know when the issue date for my credit card was.

I then phoned Tom back at work. “Nance, for some reason, American Express is the hardest charge card to work with. Do you know the date when it was first issued?”

“No Tom,” I said. “Five, six or seven years ago? How about me using my Visa card? Would that be easier?” I then gave Tom all of the information.

“Could I please speak to Tom,” I asked the receptionist, again. She immediately handed the phone over to Tom.

“Hi Nance. I think I didn’t write the numbers down correctly. Can you give me the numbers, again?”

I read off the set of numbers, and on the third set, we caught the error! After we repeated the numbers —it was a done deal! Then we said goodbye to each other, again.

Five minutes later, I couldn’t help it, I picked up the phone and I called my sister, Cindy!

“Hello, I was just checking to see if I had anymore new phone calls,” I said. We broke out laughing! Here is a picture of my Justin Gypsy cowgirl boots! Y’all have a great evening! 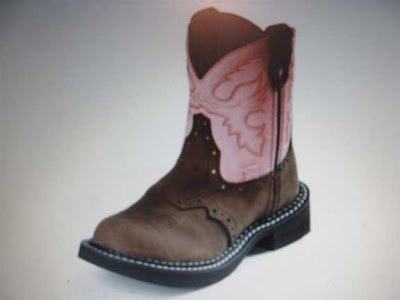 Those boots are so cute! So glad they had them in stock for you and that Tom could make some commission. You should post a link so other folks can buy boots from him! I'd love to see the full line of Justin Gypsy boots, they're adorable!!

Thanks again Nancy for the Happy Birthday wishes for my wee lassie. Robyn was so surprised and thrilled!

Greetings Fay! I love those boots, too, and cannot wait to get them! I am so glad that Robyn was surprised and had a wonderful birthday! It made my day!

After seeing your choice of boots, it makes me even madder at myself for not picking up a PINK "gimme" cap for you when I saw it in Fredericksburg only a few weeks ago. That cap boasted the wording "Pink is an Attitude!".
Now if that slogan doesn't fit you, Nancy, I don't know WHO it fits!
BTW I expect to see you wearing those great Justin boots at the Riders in the Sky concert on Valentine's Day!
Merry Christmas to all of you there on the ranch!

Hi Mari! It is great to hear from you! And, thank you for the comment! I love my boots, and cannot wait to get them from my sister! I hope to go up to Austin during the holidays—to see my sister, Cindy, and Ray, and my brother, Ronnie and Nita! Trust me, I will wear them to the Riders In the Sky concert! Tony and I will need to go the afternoon show though—since we can't drive at night! Happy Holidays to you and the NoMads!