Cowgirls In The Sand!

Today was an absolute blast for me, because I got to be a cowgirl! It has been a really long time, since I put on my Justin Roper cowboy boots, jeans, cowboy hat and bandana—and it felt so good! The reason for me dressing up in my cowgirl garb, was because my dear friend, Cindy P., had asked me to go horseback riding with her, on a Texas Parks and Wildlife 5,000 acre ranch, for horses only trail riding, just south of Bandera!

This morning, after taking care of business, I disappeared into the bedroom. Ten minutes later, I came out of our bedroom—a Texas cowgirl! Tony loved it, and told me that I had to go show Kinky! So, I went over to the Lodge to show Kinky my outfit. He liked it, too!

At ten-thirty, I took off in Trigger—headed to Bandera, to meet Cindy. Because my iPod was acting up, I was ten minutes late, but fortunately, it didn’t cause any problem.

We arrived at this incredibly beautiful Texas Park, on time, and Jeanie B., our wrangler, who owned the horses, was already there, with her horses saddled, and ready to go! Cindy was first to saddle up! She stood on a park bench, to saddle up on Davy Crockett, a handsome tri-colored Paint! 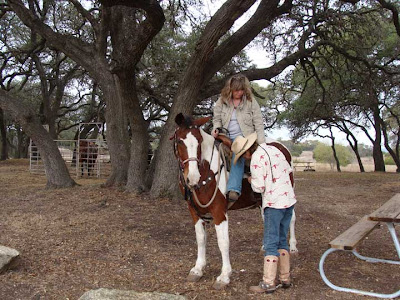 Then it was my turn! Not able to balance as well on the park bench, we found a giant rock for me to saddle up from. My horse was Black Jack Cadillac, and he was a very well behaved horse! After adjusting my stirrups, Jeanie climbed up on to her horse, Thunderbolt, without having to use a bench or a rock, because she is tall—and then we took off! Yee Haw!

Thunderbolt led the way, followed by Black Jack Cadillac and then Davy Crockett. I was in heaven or in between! I had forgotten how fun it is to ride! We rode through streams, valleys and climbed a bluff—it was so fantastic! 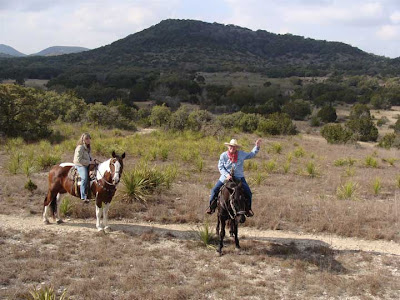 At one point, during our trail ride, Jeanie stopped Thunderbolt, jumped down from her saddle and went into a thicket to pick up an old horseshoe. Then she walked over to me and my sidekick, and started tying the old rusted horseshoe to the back of my saddle. “Why are you tying that to my saddle?” I asked.

“Because, it’s the only saddle with back straps,” Jeanie answered. “Just be careful not to sit on one of those old rusty nails.” Four rusty nails were sticking out of it! Then Jeanie jumped back into her saddle and we were off, again!

About ten minutes had passed, when Jeanie stopped Thunderbolt, again, and jumped down to the ground! “Look what I’ve found!” Jeanie said, with excitement. She held up an old blue hoof cup, which protects a horse’s hoof, if it loses a shoe. Jeanie then walked over to the other side of my saddle, and started tying it to the other strap. “It’s a good thing,, that I came along for this ride, or you wouldn’t have a trash can to pick up the litter with,” I said. “Jeanie, I sure hope that Black Jack Cadillac, didn’t get his name, because you found a old junked out Caddy out here, and made him pull it?”

“Nope,” was her answer, and the three of us laughed. In fact, we sorta laughed the whole time we rode today, because Jeanie is one hilarious woman, and her stories about her many adventures in life, kept us spellbound or laughing!

After a wonderful two hour ride, we returned to the park headquarters, and dismounted our horses! Cindy didn’t need any help, but I did. I climbed down from Black Jack Cadillac, using that same giant rock, that I had used to get up on the horse.

While Jeanie tied off her horses, Cindy went to her car, and came back with a small box of Fig Newtons! Then she opened up the box, and began feeding Davy Crockett the contents! “I do this everytime,” Cindy said. “Davy loves Fig Newtons!” 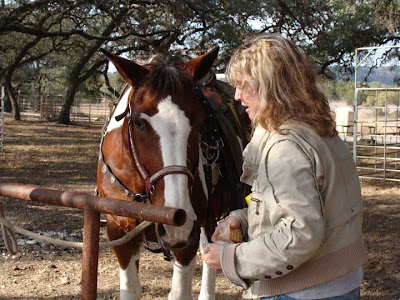 After Jeanie loaded up the horses, she gave me the rusty horseshoe, and then Cindy and I thanked her for the great ride, and then we left the park to go home. All of the way home, I thought about how much fun that I had had today, and I am most definitely going to start riding weekly—on Black Jack Cadillac—because I love that horse! Happy trails to you—until we meet again! 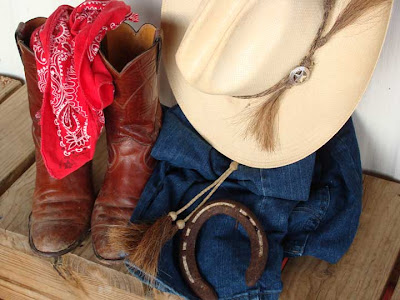 I recommend you the website www.saddleonline.com and it has lot of amazing products.