The Proof Really Is In The Pudding!

Today has been great, even though my thumb still aches and the old Band-Aids we have— keep coming off.

I have nothing spectacular to write about this afternoon, so I am going to tell you about my new recipe.

Late this morning Tony was grumbling about being hungry and so was his stomach, so after I put a new Band-Aid on my thumb I got creative in the kitchen and came up with Cousin Nancy's Chili with Beans recipe. And here it is:

Water-Sauteed: red and green bell peppers, mushrooms, onion, tomatoes, garlic and veggie burgers. (I didn't have any crumbles, is why I used the veggie burgers.)

Remove veggie burgers and set aside. Using a blender chop up all of the vegetables. Pour into a pan and add a small can of tomato sauce, a can of rotel tomatoes, beans, chili powder, salt, pepper and crushed red pepper.

Take the softened veggie burger and dice them up in the blender. Add the crumbles to the mixture. Heat and serve. (Makes 4 servings) 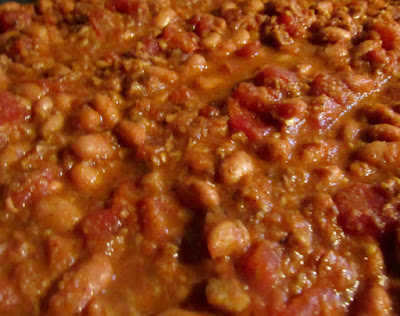 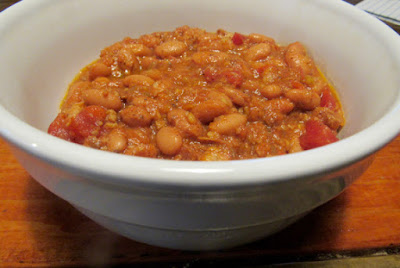 The reason that I keep writing about the importance of eating a plant-based whole foods diet is because Tony and I love this major lifestyle change, even though we do allow ourselves to cheat a little, because of French Vanilla CoffeeMate in the morning and one beer and one glass of wine in the evening.

Also because a friend of mine recently told their team of cancer doctors, at M.D. Anderson, that a month ago, after they had received their cancer diagnosis from them—they started eating a plant-based whole foods diet, and these medical experts told my friend that it was the best thing he/she could do to fight their cancer. And they also told my friend that they wished everybody would eat a plant-based whole food diet.

And even more amazing, after my friend had committed to eating a plant-based whole food diet for a month—yesterday, at M.D. Anderson he/she was told that all of the bad "numbers" from last month had improved significantly. So the proof is really in the pudding, so to speak.

Y'all have a great afternoon & evening and keep on laughing!
Posted by cousin nancy at 12:35 PM