I Leaned Out The Window And Snapped!

Today has been great sort of. The bad news or weird news is this afternoon Tony walked down the driveway to get our mail and when he returned, he calmly said, "There is a dead coral snake on our driveway." Then he handed me the mail.

I could not believe how calm Tony was when he told me about the snake, because if it had been me that had discovered the dead-deadly snake—I would still be shaking in my boots and be  trembling so badly that I would not be able to type this post.

When we neared our mailbox, Tony stopped the truck, so I could take a picture of the snake to use on my blog. So I leaned out the window and snapped this picture. 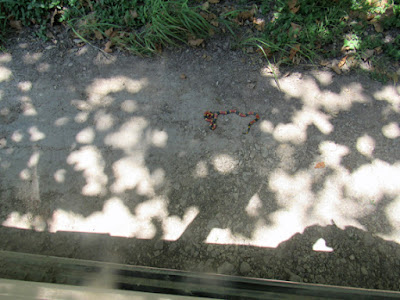 It is not a great picture, because I was too far away, so Tony took my camera, got out of Trigger and went up close and took this picture of the snake. 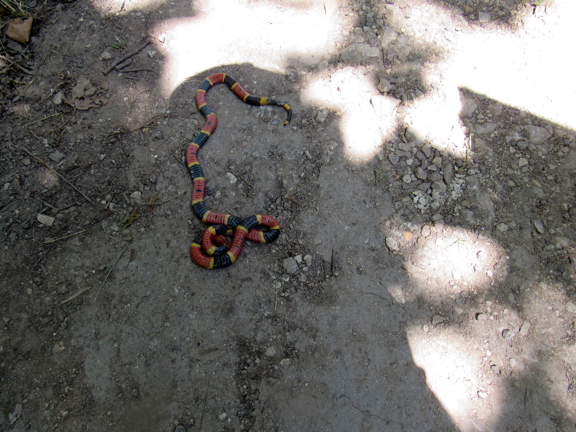 And Tony thinks that it must have been about 4 -5 foot long, before it decided to expire near our mailbox. And we don't know for sure what killed it, because Tony told me that it did not look run over or crushed. So I guess that will always remain an unsolved mystery.

But we are certain that it is a coral snake, because as we all know that famous old saying—"Red on yellow kills a fellow. Red on black venom lack," etc. So that is my creepy news for today.

Besides having to deal with the untimely death of this coral snake I do have some wonderful news to tell. Bandera Electic Co-Op e-mailed me our electric bill today.

I know it is sad or should I say semi-pathetic when someone gets excited over receiving an electric bill, but I did! Because it has been over a month since Danny and Ernest put in our new, insulated ceiling and  instead of our electric bill being over $350.00 like it was last September—it was only $120.86!!! And we are celebrating this great news. So Life is good. 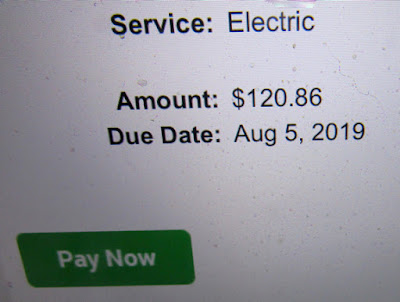 Y'all have a great evening and keep on laughing!
Posted by cousin nancy at 6:20 PM

Great news on the electric bill, Nancy! And I'm betting it's a lot more comfortable for you, Tony and the dogs inside now, too!

This particular current M.I.R. has been playing havoc with items in my life, but that is just continuing a trend that began this year. If something here could break, it did - or it's about to (if there's anything left that hasn't broken, that is).

And there have been unusual animal deaths here this week too. Found a dead, otherwise healthy-looking (fat), young raccoon on the guesthouse porch. We could only 'guess' that it was the victim of a rattlesnake bite? Then there was this kingbird that was found dead behind one of the guesthouse sofas. We could only 'guess' (what, again? LOL)that it flew inside, unnoticed, while the mini-split/ductless a/c was being replaced as the workmen could've let the front door open??

And as for the a/c being replaced, it was replaced not once but twice, just a few days apart. Our installer has installed over 25 of these units and the ONLY two he has had trouble with were right here on this property! See what I mean about the troubling trend towards breaking down that began this year? Geesh.

So I join you in celebrating your good news about the lowered electric bill. I needed some good news and you have furnished it. Thank you!

Keep reminding yourself that we are in the Dog Days of summer but they'll end in less than a month and then after that there's just a few more weeks of heat, and then we can start looking forward to cooler days again.

Hi Mari! It is always good to hear from you, but M.I.R. is definitely affecting us, too. A few days ago, during Amazon Prime's big sale, I purchased 2 identical trackers greatly reduced in price, so Tony and I can compete against each other—who takes the most steps each day.

Well, they arrived on time in the same package. Tony's worked, but mine did not work. Mine would not charge. But the good news is Amazon is replacing mine.

That is really weird about the raccoon and kingbird deaths and the problems with the two mini-split air conditioners, but I am sure that the a/c units were affected by M.I.R.

I am tired of the dog days of summer and I cannot wait to start walking with you again, in the park. Tony loves his new tracker, so I am betting that he will be walking with us, too.