Spirits In The Material World! or I Have Mike!

Friday and Saturday have been great to say the least. We have been working a lot next door, at the Escondida Resort and we've been loving getting the extra hours.

Yesterday our good friend Ronnie Namour sent me a copy of his latest music scene column that he had written for the Island Moon. I always love reading his fabulous columns, because he is such a great writer and he has such a great sense of humor.

Long story short, Tony and I met Ronnie several years ago, because of our mutual friend Rick "The Friendly Lighthouse Keeper." And if I remember correctly, every time that Tony and I and our friends went down to Port Aransas to stay at the lighthouse, Rick made a point to be sure to take us to go visit Ronnie. Also Rick brought Ronnie to come visit us when we were still at the rescue ranch. And Ronnie and Rick also came to visit us here at our new place.

Basically when Rick would come up here to see us he always brought along his beautiful, sweet girlfriend Tracy Weatherall or else he would bring Ronnie, who is also good-looking and an encyclopedia on music, too. And it never mattered to Tony or I which one Rick brought along with him, because Tony and I LOVE Tracy & Ronnie.

As y'all already know Rick sadly passed away this past February and it was devastating to us, Ronnie & Tracy and all of Rick's many friends. Here is a picture of Rick that was taken for a Texas Monthly story about him. And a picture that I took of Rick, inside our trailer, hamming it up by pretending to be warming himself up, in front of the TV's faux wood burning fireplace that was in a constant loop. 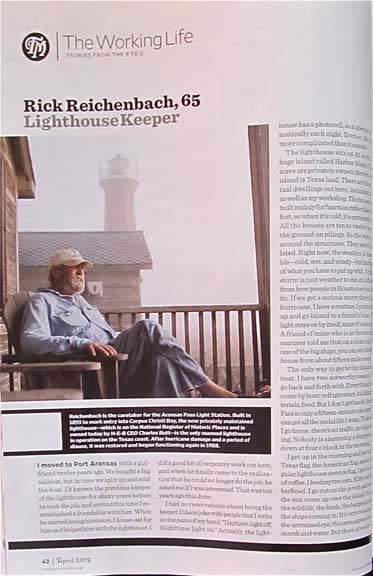 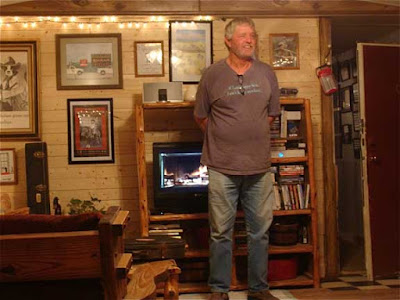 We loved Rick and just seeing these two pictures of him makes me miss him even more. But thanks to our dear friend, Ronnie Namour, for sending me his latest column—I am sure that Rick is okay on the other side and that he is still up to playing his old pranks on the ones that he loved and left behind. And thanks to Ronnie—I am still laughing after reading Ronnie's hilarious account about Spirits In The Material World!

Here is an excerpt from his latest music column that he wrote for this week's Island Moon.
Three Chords and the Truth
By Ronnie Narmour

"There are spirits in the material world…I’m about to tell you a wild story and you’re probably going to think I’m nuts… or delusional. Maybe, but just let me start by saying I firmly believe there are spirits in the material world. My old friend Lighthouse Rick croaked (his word) last February. We were pals since I got to Port A over ten years ago. Even when Rick moved to Nicaragua, we talked every few days. At the very end when it was obvious he only had a short time left on this world, I spent a good amount of time with him, helping his girlfriend Tracy and other buddy Elisa deal with his final journey. The day before Rick died, we sat in my truck at Caldwell Pier and talked for a few hours. I told him I’d watch after Tracy and make sure she was taken care of. This comforted him. He died the next day and Tracy and I eventually fell in love. Here’s where it gets weird.

You can’t hang out in my bedroom anymore…

Strange happening as soon as he died. When the three of us were at Charlie Marshall’s Funeral Home in AP making arrangements in a meeting room and the funeral director left to go get something, a door leading to a showroom with caskets and urns and funeral paraphernalia flew open by itself, there was no one in there, and a blast of cold, cold air hit us. It was wild and obvious and really cold. All three of us knew it was Rick. We struggled for another explanation. We walked into the room and it wasn’t that cold in there. Fast forward to last week… one night when I got up to get some water, the light on my ceiling fan came on by itself when I was out of the room. It woke Tracy up. You have to pull the chain three times to turn that light on. The next night when I again got up for water and Tracy was sleeping, the wind chime in the corner of my bedroom shook violently and there was no wind or reason for it. I know spirits attach themselves to material objects and Rick’s laptop, with all his pictures and stuff, sat directly under the wind chime. I got rid of it the next day and had some sage that Sally Marco’s (Gratitude in Port A) Shaman daughter Jasmine gave me and we did a thorough cleansing of both our houses, burning the sage, assuring Rick that we would always love him but he couldn’t hang out in our bedrooms anymore. So far so good with that, I think he got the point but the jury’s still out. Rick could be cantankerous.

I have Mike Ellis…
Then yesterday I got a call from Janet Planet, “Ronnie, I have Mike Ellis.” Mike Ellis is the founder of the Island Moon and died nine years ago. Janet went on to tell me that she had been talking to Patsy Jones on some dimension recently. Patsy died a long time ago, too. I just went with it. Patsy was a folk singer and wrote the classic song, ”That’s My Island”. Mike Ellis and Patsy were great friends and Mike would often roll around on the ground when she sang about tumbling tumble weeds. Janet Planet said that while she was talking to Patsy in spirit-land, a tumble weed blew up in her yard and she was sure it was Mike Ellis and she wanted me to have him, and brought the tumbleweed over to my house and hung it up on my clothes line, where it still is. I’m not trying to go anywhere with this story. I’m just telling you what happened. You can’t make this stuff up. I told you, you’d probably think I’m nuts. I think it’s time to talk about some music now…."

(Then there is this hilarious photo taken by Ronnie, of the tumble weed hanging from Ronnie's clothes line.)
"Mike Ellis is on my clothes line and Lighthouse Rick is in my bedroom."
—Ronnie Namour

Y'all have a great evening and keep on laughing!
Posted by cousin nancy at 5:09 PM

Hi Anon! Thank you for your comment. I am glad that you enjoyed reading Ronnie's hilarious haunting story. I still can't quit laughing about it.

What an interesting story!! I met Rick when I was visiting you and Tony at Utopia and I heard many stories about him over the years. This doesn't surprise me one bit! LOL

Hi Fay! I do remember that visit, because he had come up to help us with our "Bon-e-fit" in Kerrville and it doesn't surprise me either about Rick messing with Tracy & Ronnie..