Yesterday, after I wrote and posted on my blog, Tony and I went outside to put the blue tarps up, on the Egg Palace, because a cold front was due to arrive late Friday night. And while we were out there working a UPS truck arrived to our surprise.

After we had finished working, on the Egg Palace, I went over to Kinky's, because he had called me, while we were outside to invite me to come over and go on another hike with him and The Friedmans.

Yesterday, when I wrote that there hadn't been a lot to write about for the past few days, the only thing that I forgot to mention was that Kinky and I have been going, almost every day, on late afternoon hikes, with his four precious dogs aka The Friedmans.

When we finished our long hike around the ranch, Kinky invited me to come inside for a visit. After we had discussed his new idea for the title of his latest book, he told me another funny Willie Nelson quote. Then we matched wits trying to remember the names and dog breeds of U.S. Presidents. Then said, "Nance, I'm hungry. I don't feel like cooking and I don't want to drive to town."

"Let's go up to Koyote," I suggested. "Tonight's their all you can eat catfish buffet." And seconds later, I was on Kinky's phone calling Tony to see if he wanted to go eat catfish with us.

Twelve minutes later, we drove up and parked Trigger right next to Mr. Green Jeans, Kinky's green Chevy pickup. Then Kinky walked up and greeted us.

During our fun, delicious meal, we waved to Sarah, who was working behind the counter. "Happy Birthday, Sarah!" The three of us said. Then our good friend, Sarah, came over to our table to greet us, thank us for her birthday card and visit with us. And she brought with her three, big slices of her chocolate birthday cake to enjoy. 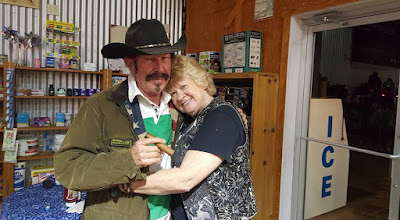 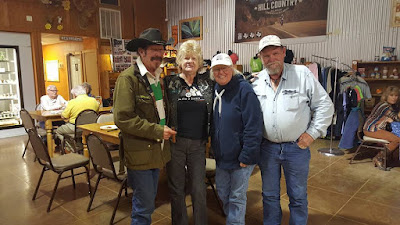 Following the fun photo-shoot, Sarah asked Kinky if he minded her posting his picture with her, on her FaceBook page. "Do it!" Kinky said. Then Sarah asked me how Little Debbie was doing? I told her that she was fine and then Kinky started laughing, and said, "I don't believe this! Everywhere I go somebody is always asking me about how Little Debbie is doing."

"That's because Little Debbie is famous, Kinky!" Sarah said. "She's even got her own blog and I...."

And a few minutes later, we adios-ed Sarah. And as we went out the door, Irene, another one of our favorite employees there, half-hollered, "Y'all have a great night!"

"Good night, Irene," I half-hollered back to her.

Then Kinky chuckled, and joked, "Nance, that would be a great title for a Country song." Seconds later, we adios-ed each other and climbed into the trucks. Tony and I took off first.

I immediately checked the Caller I.D. to discover that Kinky had called us from his cell phone. So, I immediately punched in his phone number, thinking that he must of had truck trouble and needed our help. But once again, I was wrong.

"Nance, do you know where @#$ Wallace Creek Road is? There's a woman, on Wallace Creek Road, who stopped me. She is lost and she can't find the address where she is supposed to meet up with her boyfriend...." Kinky adios-ed us after he had talked to me and then Tony, about the address, because we weren't any help at all, because we know our neighbors, but not their addresses. Bottom line: Her boyfriend found her and she was pretty mad.

As I finish writing this tonight, I plan to write for a few more hours and then I'll decide which television show to watch. And because, there isn't much to choose from, I've narrowed it down to:
Turkey Fried Easy or Best Christmas Lights Ever. But since sweet Karen and Terry have sent us another delicious Honey Baked Ham, I am going to watch Best Christmas Lights Ever.

Y'all have a great evening!
Posted by cousin nancy at 5:15 PM