Today has been okay. Early this morning we talked to Rick and he didn't sound too good, which is normal when you are in ICU and having to take morphine, for pain. He told us that he has bacteria attached to his aorta and his doctors are hoping that antibiotics will take care of it or otherwise they will have to operate on his heart to remove the bacterial deposit.

After we talked I was pretty depressed and worried, so I called a good friend of mine, in hopes they could cheer me up, but that didn't happen, because when I called she/he they told me they couldn't talk, because a massive man-hunt was in progress for a missing man, that has seizures that needs to take his meds every eight hours. My friend told me that helicopters were tree-top flying, all around, in search of the man, who had gone missing since yesterday morning.

We tried to talk a few more times, but my friend had to keep adios-ing me, because search and rescue teams were needing to talk to he/she, etc. "There are tons of rescue people out here searching, from neighboring towns and some of them are even on horseback...."

The last time I tried talking to my dear friend, low flying copters started circling he/she's home, so once again we had to adios each other, because we could not hear each other over the loud helicopter noise.

This afternoon, I was still somewhat depressed about Rick, when we went to Kerrville to rent a car. We had to rent a car, because Thursday morning Chet, Tony and I are driving up to Fort Worth, to meet up with Kris & Jim, to attend a NASCAR race and to receive a check that will benefit our rescue ranch.

After we rented the car, we swung by the Post Office Sub-Station, so I could mail some letters and then we drove around the corner and stopped at one of our favorite stores that always has the best of vibes—Wild Birds Unlimited.

Kevin, the friendly owner, Tricia, the walking encyclopedia on horticulture and Marguerite, the sweet woman who keeps adopting dogs from us, greeted us when we walked into the super cool store. After howdies were exchanged Marguerite caught us up with Scout's latest adventure—she got spayed, then she got an infection and she is now on antibiotics until tomorrow.

When it was time to purchase Tony's (Wild Birds Unlimited's) superior birdseed, I was standing near the counter when I noticed the most beautiful, pair of does and fawns resting, behind the counter. "Oh my goodness," I said. I love those! Are they for sale?" Kevin, Tricia and Marguerite started chuckling.

"Sort of," Kevin said. "My wife Linda bought these for holiday decorations, for the store and..." Then Tricia and Marguerite started teasing him about selling them without Linda knowing about it. And a few minutes later, Tony and I adios-ed them. Tony was carrying his big sack of birdseed and I was carrying my new, beautiful doe and fawn.

When we got back home, I tried taking a couple of videos of Little Debbie's first encounter with the doe and fawn, with the toy Chihuahua walking around barking and Roy, Belle, Beau and Alice's first reaction to them, but unfortunately, the videos weren't anything to write home about. Anyway, here are pictures of my beautiful doe and fawn and Little Debbie and Big Al(ice) posing under the bench. 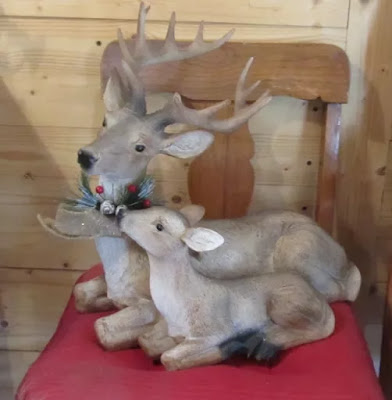 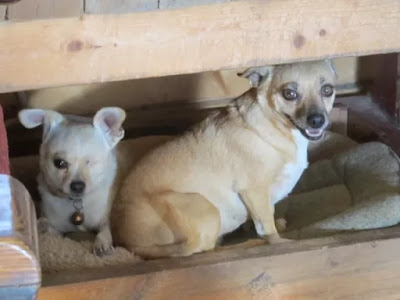 Early this evening, I called Rick. "Hi Nancy. I'm alive!" Rick joked, when he answered the phone. He sounded much better than earlier and he seemed to be in much better spirits, thank goodness. He told me that he is not in as much pain and he will know more tomorrow. So, we will call Rick back, in the morning.

Right after Rick and I adios-ed each other, my dear friend called me back with the latest man-hunt, rescue news and afterwards we had a big laugh about it. "Nancy, the all day, man-hunt is finally over. He's alive. And it was totally bizarre, too!"

"This afternoon I was on my way to the store to buy some beer and I saw our UPS driver, who always drives like a race car driver, stop abruptly, on the side of the road. Then a man climbed into the delivery truck and it took off, again. I thought it was really weird, because our UPS man never stops for anything. Anyway, the man he picked up was the missing person. So all is finally back to normal. Peaceful and quiet."

After we had quit laughing about it being a UPS man being the one to rescue the missing person, I said, "I love UPS. They always pick-up and deliver the goods on time." And that's about it for tonight.

Y'all have a great evening!
Posted by cousin nancy at 6:34 PM

Er, whitetail does do not have antlers. That is a buck with a doe.

Hi Anon! Laugh out loud, because you're totally right about whitetail does not having antlers. That just shows you how much I know (or don't know). Maybe it is Bambi with his dad, but then again it might just be Bambi's sister. Did Bambi have a sister?

Ok, this made me laugh out loud...""Sort of," ..... "And a few minutes later, Tony and I adios-ed them. Tony was carrying his big sack of birdseed and I was carrying my new, beautiful doe and fawn."
You're hilarious, Nance!

Hi Fay! Tony and Chet have been teasing me about it all day and so did Tony's brother Sam and his wife, Stacie.

They are so pretty! And Y'all have a safe and fun trip!