Yesterday and today have been great. Yesterday morning, at 8:30, our good friend Aaron came out with his chainsaw and he was ready to get started cutting up the downed cedar tree, in Miranda's pen.
And while Aaron's chainsaw buzzed, Tony did the morning chores outside.

It took Aaron several hours of hard work, sometimes in the rain, to get the tree out of the dog pen. While he was buzzing away and cutting up the dead tree, he had a fire blazing nearby, outside of the pen, burning up the pieces he had cut.

Aaron left around 3:30, after he had replaced and repaired part of the damaged fence and stacked wood. It was about 4:30 when I went outside to take these pictures of the repaired fencing, etc. 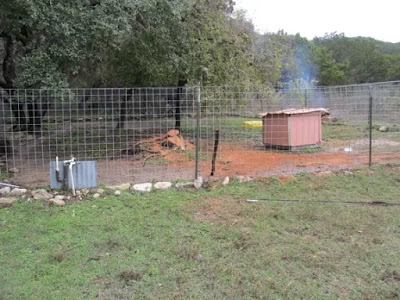 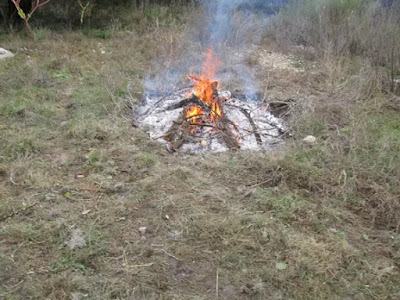 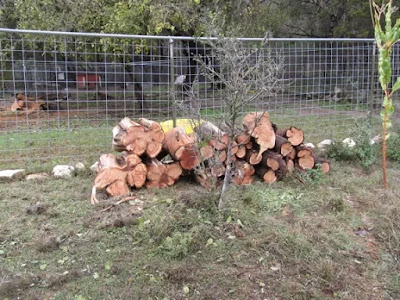 Now I want to thank everyone who has been giving me suggestions and leaving comments, on my Blog, about Little Debbie's Alien-attracting-helmet. But I think that I have solved the problem, but I won't know until I spray paint the tiny paper baking cups—Moldes de paper. The good thing is I now have backup, if these don't work. 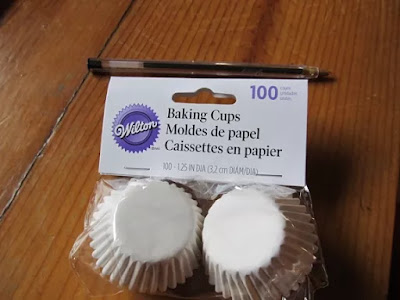 When we got back home I used about ten, stacked cups, to make her Alien-helmet prototype and it only took me a few minutes to punch heart-shaped holes and tie on the pink ribbons. Even though I still need to spray paint it silver, I asked Tony to help me put it on Little Debbie's head, so I could see how it would fit on her tiny head. I took this picture, before we outfitted Little Debbie, to show how it compares to my human-sized, Alien-attracting-helmet. 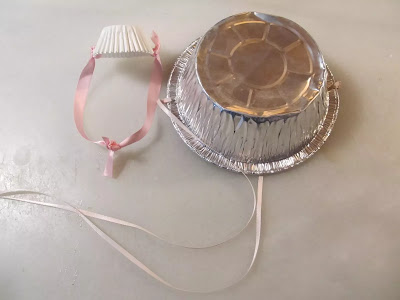 Fortunately, Little Debbie's Alien-attracting helmet fit her and I think she likes it too, because she didn't want Tony to remove it from her head. 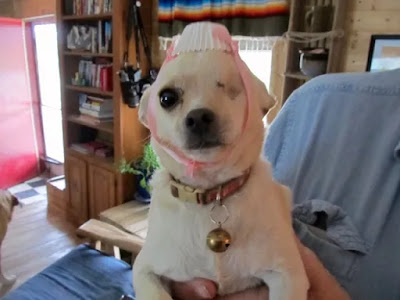 Today while we were in Kerrville we also went to the Home Depot store, so I could buy some hand tools, because I am getting ready to turn my pink, writing cabin, into a tiny house project. I love my little 12' X 24' cabin, but I want to turn it into a more cozier place for me to do my writing.

I plan to install, with Aaron's, Chet's and Tony's help, a wood-burning stove, remove the electricity and make it totally off-grid by using solar panels and a generator. I also plan to put in a small kitchenette. And I've already purchased a generator, that should arrive in a few days and I have just about made up my mind on which wood burning stove I want to buy.

Anyway, today I purchased a 200 piece Husky tool set. It was on sale, with a huge savings and it also came with a locking, steel tool box. Tony loves it, but now I am not so sure that I love it, because when I tried to pick the thing up—I couldn't. Omg, it must weigh over 50 pounds. And Tony keeps teasing me about being "such a weakling." So, I plan to paint all of my tools pink, so he won't want to use them. 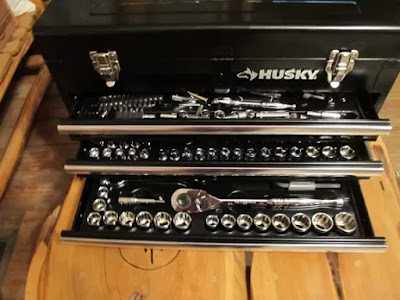 When I told him that I was going to buy some pink fingernail polish and paint the tools pink, he quit laughing. "Since it is so heavy," I stated. "I'll just remove the three trays and carry them, one at a time, outside. Problem solved."

Tony started chuckling, and said, "You can't, Nance. Because the drawers don't pull all of the way out. See." Then he pulled the three trays out as far as they would go. "Don't worry, I will carry it anywhere for you. I was just messing with you...."

Y'all have a great evening! And keep on laughing!
Posted by cousin nancy at 4:39 PM