Our Fort Worth NASCAR trip was a lot of fun. Thursday morning after I did the Harley Show and his Tony and I started the last of our packing for our adventure up to the Texas Motor Speedway.

We had our dear friend Maribeth baby sit our rescue ranch for us. When she arrived, and a few minutes later Chet arrived, Tony had just finished doing his morning chores outside. So, I suggested making healthy fruit smoothies for all of us, so it would hold us until lunch time. But that didn't happen.

After we had parked Trigger, behind Wolfmueller's Books, we took off in the rented, black, Nissan Altima, to go meet Kris & Jim, in the Y.O. parking lot. When we pulled up, as Jim & Kris were getting out of Buddy, Kris' Toyota truck, Tony and Chet told me that they were starving. So when Tony lowered the window, to greet our friends, Tony said, "Chet and I are starving." After Kris & Jim and I had quit laughing, we took off to go eat breakfast, at Randy's & Lisa's Save Inn Restaurant. And it was delicious and Tony and I ordered the exact same thing—Sinker Omelet, whole wheat toast and hash browns.

Forty-five minutes later, after eating a delicious breakfast, we took off, following Kris & Jim to Ft. Worth, Azle to be exact by Lake Worth.

Our trip was fun, because we were back and forth on our phones with Kris & Jim. But, it seemed like every county that we entered had some kind of weather warning, such as flooding, flash flooding or tornado alerts.

When we arrived at the La Quinta Inn, in Lake Worth, we went to our rooms to unpack. Our room was 309, Chet's was 307 and Jim & Kris' was 302. Then Tony & I did the dumbest thing, which didn't seem to surprise our friends.

A few minutes later we had to go downstairs, to meet everyone for Happy Hour. And when we got on the elevator I pushed the 1st floor button and stood back. When we arrived on the 1st floor, Tony and I took off in the wrong direction and we could not find the lobby. So we went back to the elevator to see if we had gotten off on the wrong floor, but we hadn't.

So, Tony pushed the 3rd floor button. When the elevator door opened Kris & Jim were standing there. So I immediately confessed that we could not find the lobby, which made them chuckle. Then we got back on the elevator and went back down to the 1st floor with "our troops." "Nancy," Kris said. "The lobby is this way. Y'all went the wrong direction..." And while we were having fun visiting with our friends, we found out that a tornado had just touched down, in Fort Worth and it was starting to rain outside. Needless to say, I was a little more than nervous.

After a fun happy hour, we went back up to our rooms to get ready, to go over to Adina & Butch's house, to eat a delicious BBQ dinner. It was fun and the food was delicious.

When we got back to the La Quinta Inns & Suites, the cold front had blown in and it was raining, thundering and lightning outside—once again, not my kind of weather. Then Kris & Jim invited us to come down to their suite for a drink and that was a lot of fun, because we laughed and joked about things we had done when we were young.

Then when Kris & Jim highly suggested that we stay over another night and go to the Friday night truck races, at the Texas Motor Speedway, with them Chet, Tony and I took a vote. Then I told everyone that I was going downstairs to get us rooms, for Friday night. "Y'all, if I am not back, in ten minutes, send out a search party, because I will probably get lost trying to find the lobby." Then I adios-ed everyone and a few minutes later returned safely to room 302.

A little while later, we returned to our rooms. I opened our curtains and there was a distant lightning storm, lighting up the entire sky, so I grabbed my iPhone, Tony grabbed his camera and then we started trying to take pictures—in hopes of capturing the lightning. Here's the best one that I took of the lightning, over downtown Ft. Worth, which was miles away from us. 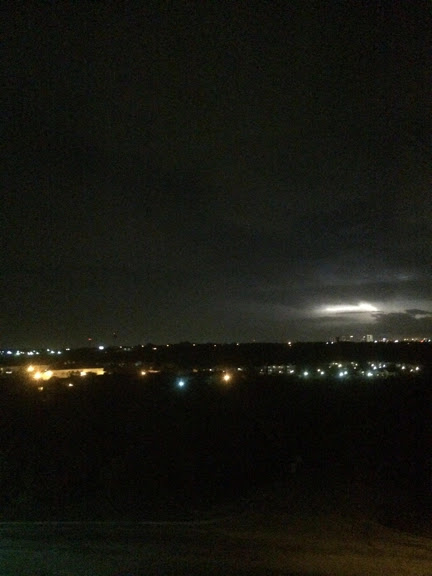 Friday morning, we met for breakfast downstairs and Tony and I were very impressed with La Quinta's Continental Breakfast, which included a cool, waffle making machine, yogurt, juices, eggs, sausage, toast, biscuits and gravy, cereal, fruit, coffee, tea, etc. When I told our friends about how impressed I was, I immediately started laughing, and said, "But then again, Tony and I don't really have anything to compare it to, because the last time that we stayed at a motel or hotel, was March 10, 1999, the day that we got married...."

We decided to spend the morning and early afternoon, at La Quinta, because Adina was at home anxiously waiting for their Friday mail to arrive, because she was waiting to receive our NASCAR ticket packets and the check, for our rescue ranch, to arrive.

Around 1:00, we called Adina to tell her that we were going to go eat lunch somewhere and she suggested that we go eat, at Ginger Brown's Restaurant. "It's close to La Quinta and it is down home cooking. The food is absolutely delicious..."

And we were glad that we took Adina's advice. It was the coolest restaurant, with the best of vibes. The walls were lined with hundreds of assorted cookie jars, pictures and paintings. The waitresses were all upbeat and laughing and everyone in the place was happy. And all of the booths had those  small, table jukeboxes, like they use to have in the 60's and 70's. Here are a couple of pictures that I took with my phone. 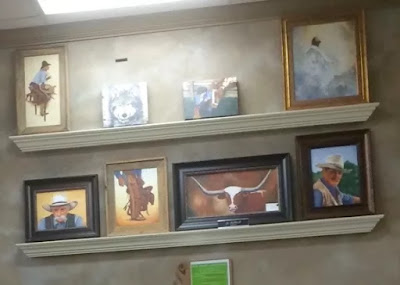 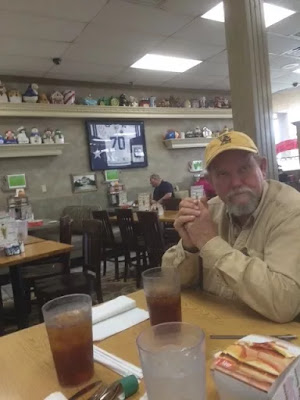 The food was totally delicious! Before we were served our meals, the waitress brought us some fresh, homemade, hot-out-of-the-oven biscuits to munch on and they were the best biscuits we've ever eaten.

Of course, Tony and I ordered the exact same thing: chicken fried steak, mashed potatoes and green beans. Kris ordered "Something Effe Mae Threw Together" and Chet ordered five vegetables. Unfortunately, I can't remember what Jim ordered, but I remember him telling us it was the best he had ever eaten. If you click here you can check out Ginger Brown's Restaurant and see what Tony and I ate, because it is at the top of the page.

While we were eating lunch Adina called me. She was disappointed and apologized, because their mail had come, but not the tickets and our check. I told her not to worry about it, because things like that do happen, especially when it comes to the mail. "I am going to go ahead and buy y'all some tickets for tonight's truck race and as soon as I print them out I will come over to the restaurant and give them to y'all. And ten minutes later, Adina arrived with tickets in hand.

The truck races were great and Chet, Tony and I were so grateful that Jim had brought along earplugs for us to use. Good grief, I could not believe how loud the trucks were when they flew past us, on the track below. And here is a photo that Jim took of Kris, Tony and me during the truck race. 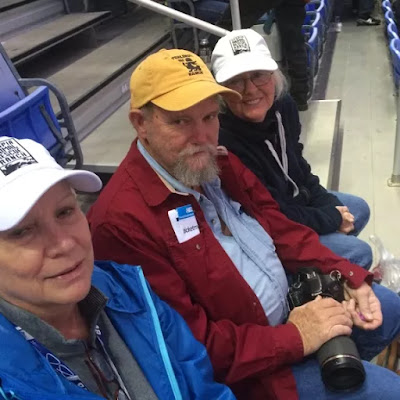 We got back home yesterday afternoon, around 2:00 and we were tired, but we were so glad to be back home and with our dogs. Roy, Belle, Beau, Alice and Little Debbie were more than happy to see us and Chet's dog Willy howled and howled, with delight when he saw Chet.

Today, I caught up with rescue ranch business and then I spent a few hours outside, working on my RV, the Mother Ship and I am thrilled with the results.

Our dear friend Rick is having heart surgery tomorrow. The doctors are going to replace one of his heart valves, so please include him in your prayers. And that's about it for tonight.

P.S. I forgot to tell you about what happened to Maribeth while we were gone. I will write about it tomorrow.

Y'all have a great evening!
Posted by cousin nancy at 6:34 PM