Today has been great. Late this morning, Tony and I went to Kerrville to buy dog food and for me to pick up a few groceries.

While we were at the big H-E-B, Tony was over on the dog food isle, filling up a grocery cart and I was a few isles down, putting a gallon of 2% milk, into my grocery cart, I saw a woman putting a couple of egg nog cartons into her shopping basket and it brought back fond memories. The last time I drank egg nog, was in 1989, at my parents home, in Fort Worth and it was on Christmas Eve.

Mom and Dad never drank hard liquor, except on Christmas Eves. Every year, the day before Christmas Eve, Dad would go to the liquor store and purchase a medium sized bottle of bourbon, a few cartons of ready-made egg nog and a couple of boxes of Queen Anne Cordial Cherries, in dark chocolate.

None of my family was all that wild about those chocolate covered cherries, but we would always eat them, because it was my father's most favorite Christmas treat.

Feeling nostalgic about those wonderful Christmas' I spent with my family, I put a quart of egg nog, into my cart and then I back tracked a few isles and found the Queen Anne Cordial Cherries display and put a box of them into my grocery cart, too. Then I continued shopping. 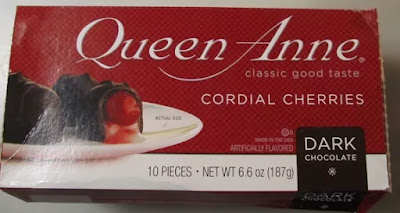 Fifteen minutes later, I met Tony at the truck and he loaded up our groceries. As we were driving through the parking lot I told Tony that I needed to go to the liquor store. After he gave me one of those looks, I said, "I bought some egg nog and I need to buy a bottle of bourbon, because...."

When we arrived at the liquor store, it didn't look open to us, so I jumped out of Trigger and went up to the door, because I couldn't read the store's hours. Then I went back to the truck and climbed back inside. "It's not open on Sundays," I stated. "I thought liquor stores were open at noon, on Sundays"

So, Tony backed out of the parking space and drove us home, with the radio turned off, because I did not want to listen to anymore depressing world news.

When we got back home, Tony helped me put up our groceries and then we went outside to do some mowing, because the sun was shining brightly and the temperature outside was perfect, because I was wearing a hoodie sweatshirt and he was wearing a light-weight jacket.

We ended up using the riding lawn mowers, and we mowed down the grass and weeds, in Baxter & Honey's pen and Dr. John's pen. And they look so beautiful. So, mission accomplished.

I have just finished eating two Queen Anne Cherry Cordials and to my amazement they were very tasty and they immediately brought back those fond memories, that I cherish. I've already put "Buy Bourbon," on the top of my shopping list, so the next time that we go to Kerrville I can buy some. And that is about it for tonight. Long live the Queen (Anne Cherry Cordials)!

Y'all have a great evening!
Posted by cousin nancy at 7:03 PM

Amazing, those nostalgic memories that linger! I buy Bassett's Licorice Allsorts each year at Xmas because my Dad had them out every Christmas. His absolute favourite time of the year was Christmas. Great memories and we are lucky to have them, Nancy! xx

Hi Fay! Yes, we are so lucky to have those great memories. I'll check out Bassett's Licorice Allsorts.

Hi Anon! I love them, too. Thanks for commenting.