Today has been great even though Kinky, Tony and I overslept, which was not good because Kinky needed to catch an early flight, out of San Antone and I needed to be wide awake so I could do the Utopia Animal Rescue Ranch segment with Big G.

Only having been awake for about twenty minutes before Big G called me, I tried to sound wide awake, but I am not sure that I pulled it off. Anyway, before we went on-air I told him that a friend of his had made a donation in his honor, but before I could finish telling him, we went live on-air.

Big G's Pet of the Week was sweet Hazel, a beautiful four-year-old shepherd mix. "She's a fabulous girl," I said. "She's not hyper, or a digger or a jumper..." 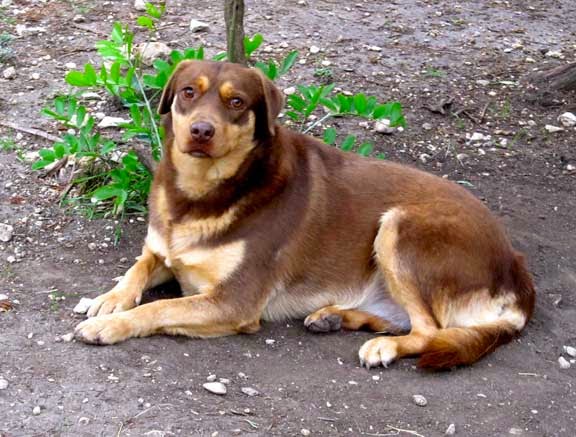 "Nancy, that's not my name and I don't know anyone named David *^%$/."Then we both started laughing.

"This is great," I said, sort of sarcastically, "because yesterday I wrote him a thank you note telling him that I would let Big G know. He's going to think I am crazy...."

Later in the morning, Kinky called me from the airport. While we were talking I told him about blogging about his foreign exchange story last night and he laughed. Then in his best German voice, he said, "This is a driving school."

Then we both started laughing and that's when I realized that I had written that he had said, "This is an auto parts store." So after Kinky and I adios-ed each other, I got on my blog and immediately changed it to "This is a driving school." So, I apologize for the misquote.

This afternoon, while I was washing dishes someone drove up, so Tony went outside to see who it was. Ten minutes later, Tony walked inside The Cabin, and said, "It was a fan of yours, from New Mexico. She and her husband were real nice. She told me that she loves all of your books and she and her husband are moving to Bandera. She told me that she just wanted to come out and see the rescue ranch, the pink cabin and find out if you are going to write a Cowgirl Sisterhood Part III, because she can't wait to read it...."

I felt terrible about not going outside to meet the nice couple, from New Mexico and I asked Tony to please come inside and get me if that ever happens again. "So, if you are reading this tonight and it was you, please call me, so we can pick a date, so you can come back out and we can drink coffee and have a fun visit, in Outer Space, The Cabin and inside my pink writing cabin. And yes, I am having a blast writing Part III." And that is about it for tonight.

Y'all have a great evening!
Posted by cousin nancy at 7:01 PM