Today has been great and so are the Chihuahuas. I am running behind now, because twenty minutes ago when I was over at Kinky's, watering his plants for him, etc. something stung my right hand's middle finger and by the time I got back home—it was swelling, itching and burning. Not a pretty sight.

When I walked inside The Cabin, Tony said, "Fay just called. She and Ian are hanging out with Kinky before his concert, in Toronto. She said that Kink's phone isn't working and he saw that you've called him twice, but he can't call you back and he wants to make sure everything is okay."

"I'll call her, but first I've got to put a salt and water paste, on the spider bite I just got on my finger." When Tony asked me which finger, I held up my hand and saluted him and that made him laugh.

While our dogs and the Chihuahuas watched me doctor myself, in the kitchen, they were all turning their heads sideways and looking worried, so I let them sniff my salt water paste, before picking up the phone and punching in Fay's Canadian phone number.

As I am writing this, my finger has finally quit stinging and burning and the swelling has gone down, as the dried up salt falls gently onto my keyboard—making it look like it has been lightly dusted with snow.

Yesterday and today, Tony and I've spent a lot of time taking many pictures of our six little house guests that we've almost gotten house broken. Then I will keep it short and tell you what actually made my day so wonderful.


The Chihuahuas After Arriving Here:
Chihuahua #1 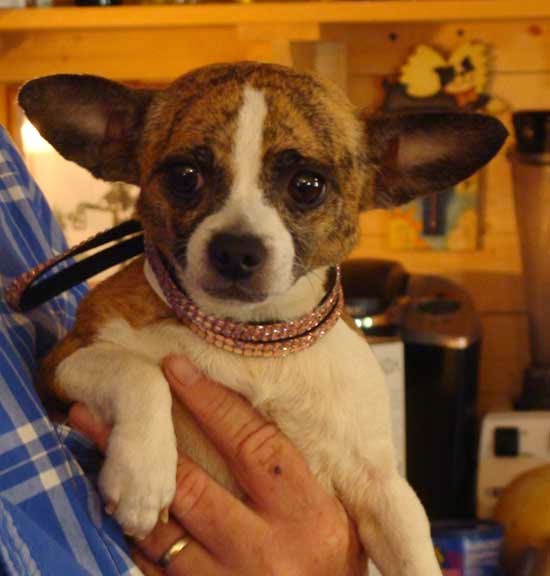 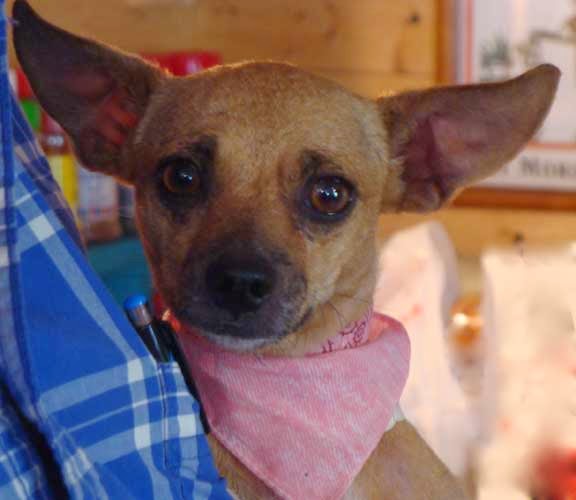 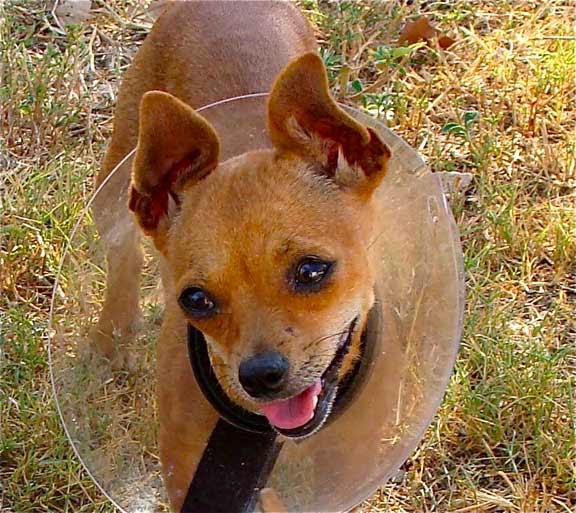 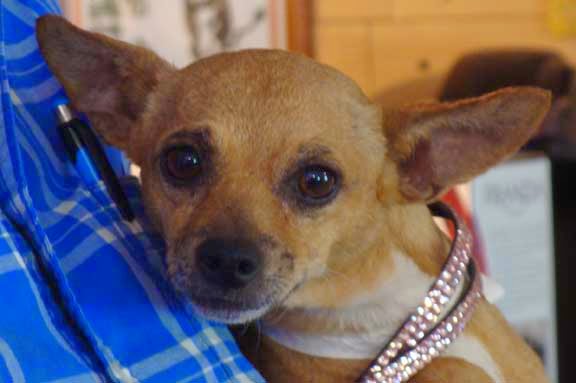 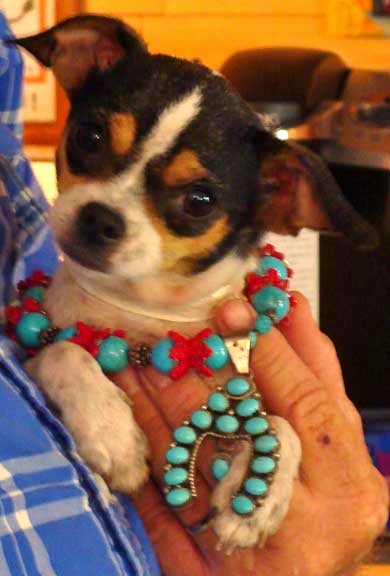 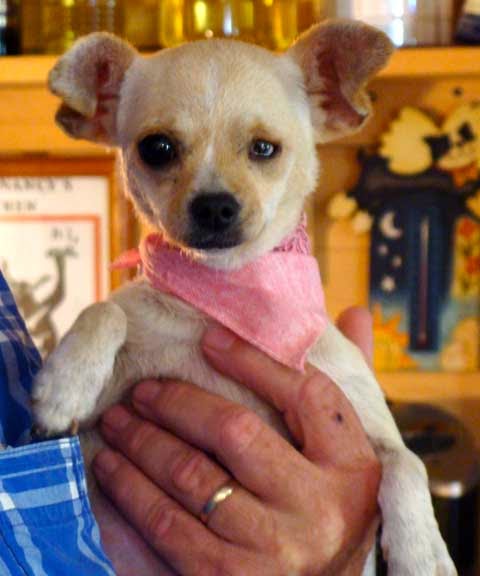 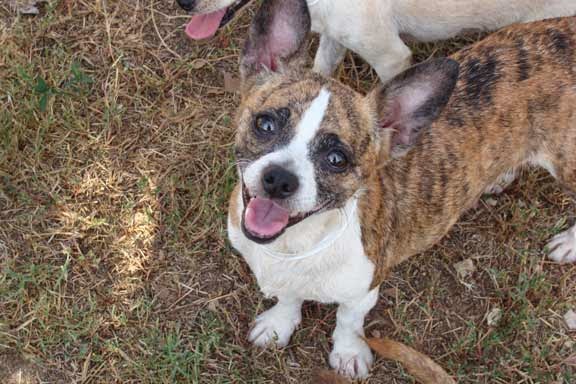 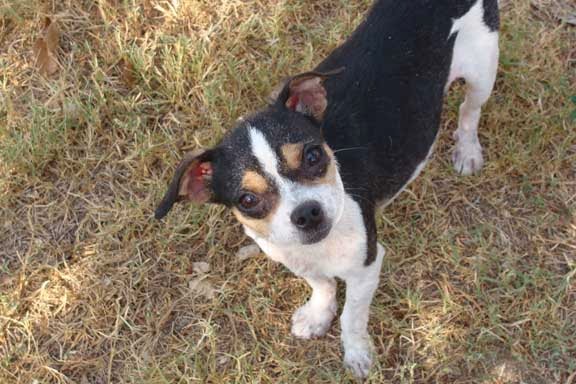 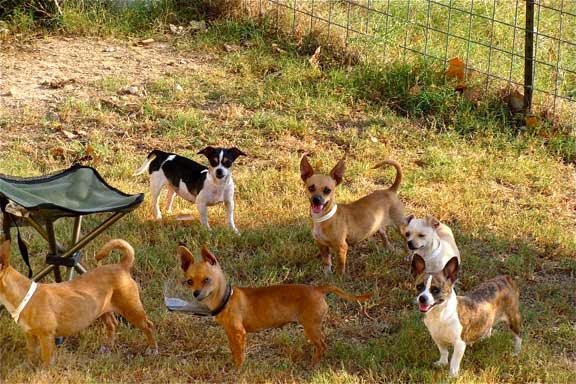 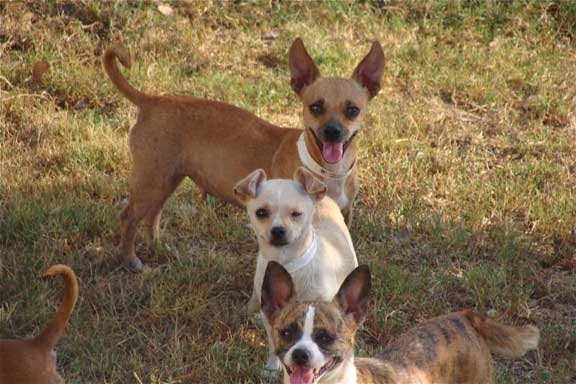 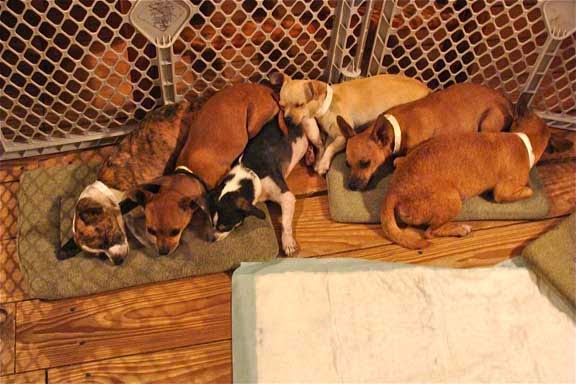 What made Tony's and my day so great is—Ellen, our great friend and volunteer adopted #5! This morning when our super volunteers came out to walk our dogs for us, I brought Eileen and Dawn up to the trailer, so I could show them our too cute, Chihuahua-six-pack and of course they fell in love with the girls, because Eileen has Chihuahuas and Dawn and her husband just adopted Sissy from us, a few weeks ago.

After Eileen and Dawn left to go walk some dogs, Ellen knocked on the door. "Can I come in?" Ellen asked.

"Eileen just warned me that I shouldn't come see the Chihuahuas, because she told me that I would want to adopt one of them..." Without Ellen noticing—Tony and I shot each other a look, knowing here was our chance to get one of the precious Chihuahuas adopted to a great home! So, we went for it. And within fifteen minutes, as Ellen held #5 in her arms , she said, "I really like this one and I'm going to think about adopting her." Then once again, Tony and I shot each other a look, knowing that we could talk Ellen into it. And it didn't take long.

"Her markings looks like one of those Queen Ann dogs," I said. "Except she has short hair." 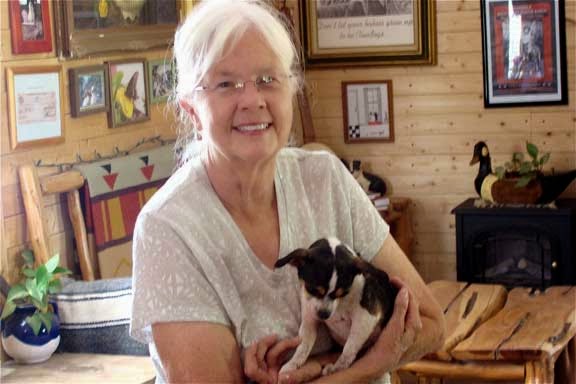 A few minutes later, when it was time for all of us to go up to Koyote Grill, at the Medina Highpoint Resort, to meet Kris & Jim for lunch, Ellen said, "Yes, I do want to adopt #5 and June is going to think I am crazy, but...."

After a really fun, delicious lunch with Kris & The Mineral Man and our incredibly, fantastic volunteers, we came back home to let Ellen signed-off on #5's adoption papers and take her home, so she can spoil her, like she has spoiled her other very lucky, rescued dogs! 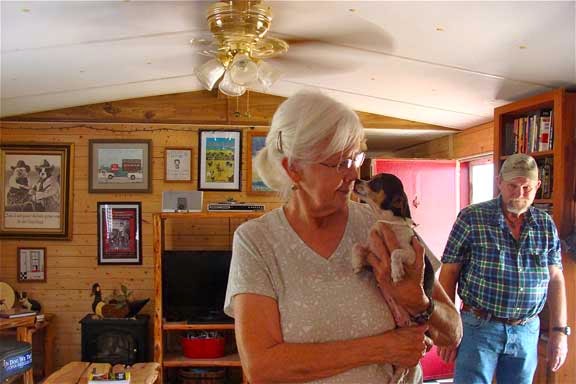 And that is about it for tonight. Life is great—Adopt A Rescue Dog!

Y'all have a great evening! And thank you, Ellen!
Posted by cousin nancy at 7:52 PM

Chihuahua #5 has a new name - June Bug Jackson. She is the sweetest little dog ever, and smart, too. When I take her out with the big dogs, she follows Twinky and does whatever Twinky does. Not a single accident in the house! And just like the rest of us Jacksons, she enjoys long naps.

Hi Ellen! This is such fantastic news! All of the six Chihuahuas that we rescued are so sweet and smart, like your little June Bug Jackson is, which by the way is a perfect name for her, that I know your sister June will love.

That is also great news about her copying Twinky's every move, with no house accidents, too. But please always remember the Alamo and accept that my little Tootsie Parker-Simons Rules All Chihuahuas! : ) Thank you so much for adopting June Bug! You and I got the cream of the crop!

Nancy, I urged Ellen to adopt chi #3, as a companion for June Bug! We shall see!

Hi Eileen! I'm with you—June Bug needs a little best friend and I love #3 too. In fact, I am trying to talk Tony into adopting #3. FYI: He has already named her Ginger and she slept in his lap for thirty minutes today.