Things are great here. Friday evening Sandy and Jon Wolfmueller treated Tony and me to a delicious dinner, at the Medina Highpoint's Koyote Grill. The Koyote Grill is becoming famous for their "Friday Nights All You Can Eat Catfish Buffet" and word has been spreading fast, all over the Hill Country, so we met our dear friends, at 6:00, so we could be among the very first to eat and not have to wait in line for the popular buffet.

During our delicious meal Sandy asked me, "Have you watched Longmire, yet?" because she and Jon are hooked on the series that they had told us about last week.

"Not yet." I confessed. Then Sandy, Jon and Tony started talking about how much they loved the popular crime fighting television show, filmed in Wyoming and five minutes later when they were all talked-out about what a great show Longmire was, I said, "Okay, I'm sold.  I promise that I am going to watch it tonight as soon as we get back home."

Needless to say, when we got back homeI kept my promise and that is why I didn't post anything on my blog Friday night. I loved Longmire so much, I stayed up to nearly midnight watching the first five episodes. I wasn't hooked on the show—I was addicted to the show!

In fact, I was so hooked on the show, Saturday afternoon, I started watching episode six, right after we had adopted out Chi #4 aka Banjo, to a very nice couple, that lives in Medina! Which means we now only have the two Chihuahuas, Alice and Ginger, left to find homes for, before we can remove the puppy pen, from the big room, in The Cabin and return to normalcy. 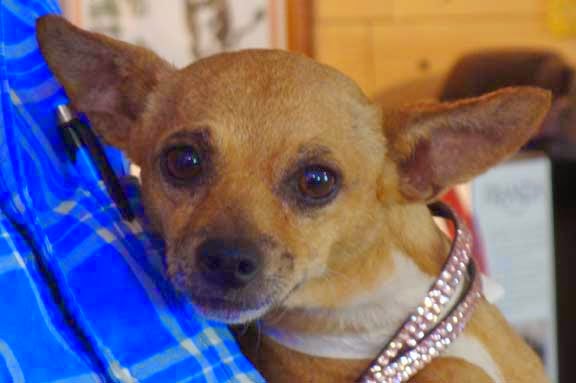 Yesterday evening, as I was about to watch another episode—Sandy and Jon called me. "....Well, did you watch it?" Sandy asked, using their speakerphone.

"Yes! Omg, I love it and I can't quit watching it. I'm hooked and am..." They kept laughing, as I went on and on talking about the great actors, the plots with a twist, etc. and they were in total agreement with me.

"We've just started watching Longmire's second season," Jon told me. "It's really good too, with some surprises and...."

"Well, I'm going to try to finish watching season one tonight and then hopefully, I'll watch all ten of the second season's episodes tomorrow," I said, followed by a laugh. "The race is on as to which one of us finishes the series first!...."

As soon as I adios-ed our dear friends—I immediately started watching another episode and I spent the rest of the evening spending Longhours watching Longmire. And that is my reason that I didn't post anything last night, so y'all have The Wolfmuellers to blame for turning me on to Longmire and me slacking-off, the past two nights.

Today, as I finish writing this, it is around 3:30 and I am scheduling this to post at 7:00 tonight. I only have nine second season episodes to watch and I'm fixin' to start watching episode two, of the second season—right now. So, if you are reading this tonight please know that I am glued to the TV, with three, adorable Chihuahuas sleeping comfortably, on my lap. Longmire Rules!