Today has been great and a lot of fun. A little before 7:00 this morning, Mama and I got up right after Tony took off for The Old Timer, in Medina.

After we got up I started to let all of the dogs go outside for their morning business meeting, when I saw the cutest bunny, in our front yard. I grabbed my camera and took this picture, from behind our front door. Then I opened our front door, so the bunny and birds could get out of our yard before letting our dogs go outside.

Knowing that it was Tony's 60th birthday, I quickly cooked Mama two medicinal, buttermilk pancakes, because she no longer likes my grits, over-medium eggs or Parmesan, buttered popcorn, that were laced with her crushed-up pain pill.

As soon as Mama scarfed-down her Previcox pancakes and had licked her bowl clean, I went outside and started doing our morning chores, because I was hoping to get everything done, before Tony returned from drinking coffee with his friends. And the good news is—I finished doing all of our morning chores, six minutes, before Tony arrived back at the rescue ranch.

When he walked inside The Cabin, I was cooking his breakfast and said, "Happy birthday, Tony. I've already done all of our chores, as a little birthday present for you...." He thanked me and then he ate his breakfast and told me about all of his friends, in Medina and on Facebook, wishing him a happy 60th birthday.

This afternoon we met Carol, at the Old Camp Verde General Store & Restaurant, so the three of us could celebrate Tony's birthday together. And yes, Tony & I just ate there two days ago, but because we love the restaurant's delicious food and all of the cool merchandise, in the store—we ate there again.

Tony arrived about ten minutes before our reservation, so we browsed around the store, as we waited on Carol to arrive. When Carol arrived, she hugged Tony and wished him a happy birthday and then she handed him a Baggie, full of her homemade, healthy oatmeal cookies. And to say the least, Tony was thrilled to get a batch of her delicious cookies.

Our lunch was delicious and a lot of fun. We laughed and joked, in between bites, and the time flew by. After lunch, Carol and I wanted to do a little shopping, so Tony followed us around the store, even though he was dying to go outside, so he could eat at least one or two of Carol's mouth-watering cookies.

Twenty minutes later, when we left the Camp Verde General Store, I had the cutest, turquoise, wall flower vase, wrapped up, inside the stores paper sack. So that makes it two sacks in two days.

After Tony and I adios-ed Carol, we took off for Kerrville, so we could run a few errands. Our last stop was at Wild Birds Unlimited, because Tony wanted to buy some of their super birdseed, that brings in all kinds of beautiful birds, for him to photograph.

While he and Kevin Pillow were picking out his birdseed, I looked around the store and fell in love with their beautiful, stone birdbaths. "All water products are 20% off until August 10th," Kevin told us, so we ended up buying a beautiful, hanging cobalt blue birdbath.

When we got back home, Tony hung up the birdbath immediately, in The Okay Corral, while I was inside The Cabin, painting the old, dark wooden sconce, that is on the same wall as my new rooster clock. Here's a picture of the old sconce before I painted it red, so it would pop the red, in the rooster clock. 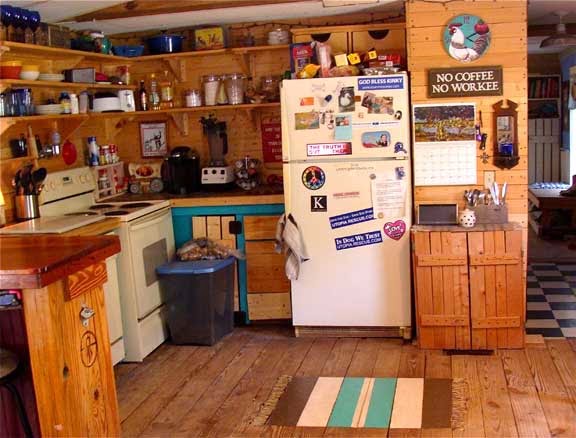 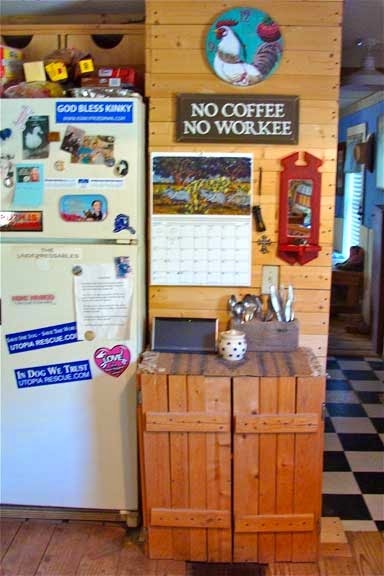 When Tony came inside The Cabin, I asked him to help me hang up my new turquoise, wall flower vase. And here it is! 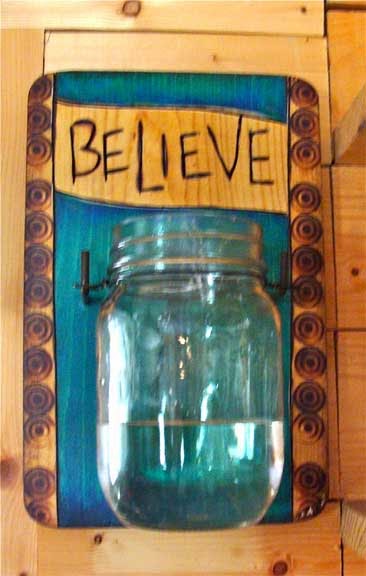 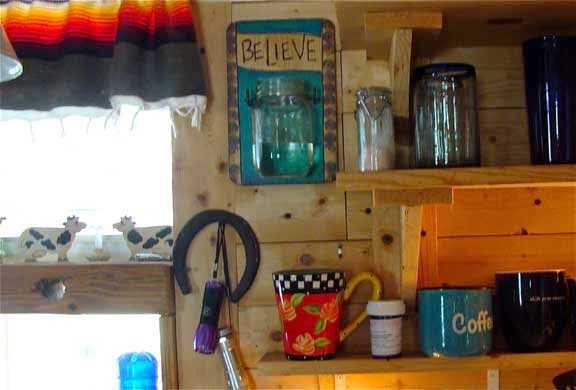 Tomorrow, I plan to pick some of Tony's  colorful, wildflowers and put them in the vase and I promise that I will take pictures to show y'all. And I believe that this is about it for this post.

Y'all have a great evening! And once again, "Happy 60th Birthday, Tony! I love You!"
Posted by cousin nancy at 7:29 PM