Today has been great. This afternoon Tony and I went to Kerrville to run a few errands. Our first stop was at the H-E-B, on Main Street, to buy groceries.

Sixty-four dollars and twenty-one cents later, we took off for one of our favorite stores, on Junction Highway, in Kerrville—Wild Birds Unlimited, owned by our friends Linda and Kevin Pillow. We had two reasons for going there. The first reason was, Tony wanted to buy some more of their superior birdseed and secondly, in hopes that we might catch our dear friend Marguerite working there, because we were anxious to find out how her new Chihuahua, that she had adopted from us, that I had intentionally named after her, was working out with her other dogs that she has adopted from us.

When we walked inside Wild Birds Unlimited, that has the greatest vibes, Kevin and Marguerite greeted us from behind the counter. "How is the Chihuahua working out?" I asked.

"She's doing fabulous and she is so sweet." Marguerite said.

"What did you name her?"

"Kevin helped me name her—Mini-Marguerite. Nancy, I have a big surprise to tell you. I LOVE Longmire, as much as you do! When I read about you loving the series I could not wait to tell you that I am hooked on it, too. Isn't Walt Longmire handsome! And did you know that he is from Australia and..." With that Kevin, Linda and Tony started laughing and then they took off to go show Tony some birdseed blends.

"Y'all take your time," I said, "because Marguerite and I have lots to talk about. Sandy and Jon turned me on to the show and since Friday night I've been spending every free minute watching the episodes. I'm nearly done with the second series..."

After our exciting conversation about Longmire, I said, "Marguerite! You and I need to start our own Kerrville Longmire Fan Club. You can be the president and I can be vice—president. And to be a member you must have a Chihuahua, a one-eyed dog and at least three dogs that you've adopted from our rescue ranch. Like you have. And we can make Sandy & Jon Wolfmueller honorary members."

Marguerite, who adopted our precious, one-eyed Odi from us, over a year and a half ago, laughed and said, "Nancy, I joked with Linda & Kevin and Susan, at Hoegemeyer Animal Clinic, that I was surprised that you didn't try to get me to adopt the one-eyed Chihuahua that you adopted."

After all of us had quit laughing, I confessed, "I have to admit that I did think about it, but Tootsie had already stolen my heart. This morning when I was outside playing with her I decided to rename her again and her new name is Little Debbie, because I kept finding myself calling her "Little" this or that."

"Nance, look at this cool frog, tabletop, rain gauge," Tony interrupted. "We need one, since Beau broke our last one."

"Sold," I said. "Marguerite, we need to do lunch in Fredericksburg real soon and take our Chihuahuas with us, so we can shop at that famous doggie store, Dogologie, so we can buy cute, little clothes for Mini-Marguerite and Little Debbie, carry bags for them and...."

A few minutes later, before Tony and I adios-ed our friends, Marguerite and I were joking about going to lunch, with our Chihuahuas, up in Wyoming, instead of Fredtown, in hopes of us meeting the actor who plays Longmire and maybe getting to be extras that get to play two quirky senior citizen women that carry around two adorable tiny dogs.

Our last stop was at Hoegemeyer Animal Clinic, so we could pick up Dottie West, that we had rescued early Saturday morning. She is a lovely six-month-old mix, that is great with other dogs. She is sweet, not hyper, a digger or a jumper. In other words, "She is another perfect dog for you to adopt." 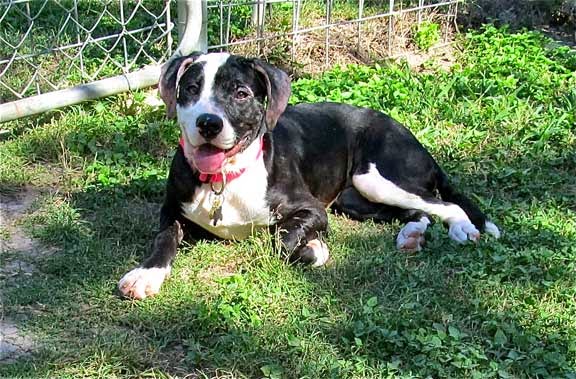 As soon as we got back home, Tony and I decided to put Dottie, in the alley, next to Buddy Holly, to let them get to know each other, before Karon and the kids from the children's home came over to walk our dogs for us. And the good news is the girls walked Dottie and Buddy together and they love each other. So tonight before I start watching more episodes of Longmire, please know that Buddy Holly and Dottie West are now living together.

Y'all have a great evening and watch Longmire!
Posted by cousin nancy at 7:07 PM