Today has been totally fantastic. This morning our fabulous volunteers: June, Ellen, Jim, Eileen and Lisa showed up to walk our dogs, but there was a whole lot of whispering going on, behind Tony's back, because for the last two days they have been secretly planning Tone's surprise birthday party at the Koyote Kafe, at Koyote Ranch.

For the past two days, Eileen and Lisa have been contacting me through secret e-mails about the surprise birthday party they were planning for T. and they asked me to please invite a few of his friends.

So, yesterday morning, before Tony returned home, from drinking coffee at the Old Timer, I was secretly sending out e-mail invites to Sandy & Jon and Fourth. And yesterday afternoon, when T. went to Hwy. 16 to pick up our mail, I called Sam, Tony's older brother, to invite him and Zach to come to the birthday party too.

Around 11:30 this morning, the volunteers took off for Koyote, to get things ready and five minutes later, after stalling Tony, he and I headed to Koyote Ranch, supposedly to just eat lunch with our friends, like we usually do.

It was fantastic, when we walked inside the Koyote headquarters and Tony saw his brother and nephew and Fourth, sitting at the long table, with our volunteers. "Happy Birthday, Tony!" They shouted and then the fun began.

While I was standing at the counter giving the cashier Tony's and my order, Ellen tells me that she and June were buying our lunch, I thanked her, because that was really nice.

When we began to eat lunch, Fourth received an urgent phone call, about a family member, so he excused himself for having to leave and took off for the hospital in Kerrville.

Through out lunch, Tony and I did a lot of laughing, as our good friends and family took turns telling one hilarious story after another. When lunch was over, Tony opened up every one's cards and gifts and he was thrilled with all of his birthday presents. Then it was cake time.

When Eileen brought the birthday cake to where Tony was sitting, she lit the candles and then we all sang the Happy Birthday song to him. After he blew out the #5 and #8 candles, Eileen handed him a knife to cut the cake, which was absolutely delicious! Here's T. cutting up at the party. 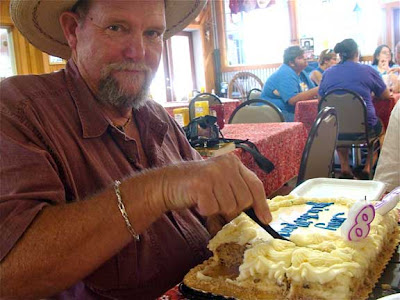 All-in-all, Tony's surprise birthday party was a total blast and he and I want to thank everyone for making his special day so special, because it was one that he will never forget, because he told me as we drove away to come home, "That's the best birthday party that I've ever had. I can't believe they did all of that for me..."

Y'all have a great evening!
Posted by cousin nancy at 6:27 PM