Today has sort of been great. The great part is: Early this morning, while I cleaned pens and Tony fed the dogs, June, Ellen, Eileen, Kris, Jim and Jim the Mineral Man, our super volunteers, came out and they walked our dogs down to Wallace Creek, to let them go swimming and we loved it, but not as much as our dogs did.

After the dogs had been walked, while we were visiting with our friends aka volunteers, Tony tells us, "I think I might have broken my foot earlier or sprained it real bad, when I stumbled and fell, in Marianne Faithful's pen."

"Nope, I'll be okay," he answered. "Are y'all ready to go celebrate June's birthday, at Koyote Ranch Grill?"

Ten minutes later, after Tony had grabbed June's birthday cake, out of the fridge, we took off for Koyote to eat lunch and to celebrate June's birthday, which was actually last Friday, on the tenth.

After everyone had placed their orders, June's party-of-eight began and so did the laughter. The conversation was interesting and often hilarious and it never quit flowing, as we tried to eat our delicious lunch, between many outbursts of laughter.

When it was "Cake Time," Jim helped light the pink candles, on the birthday cake and then we sang the Happy Birthday song to her, as she huffed-and-puffed and then huffed-and-puffed some more, before finally blowing out all of her candles.

When June's fun birthday party came to an end, Tony shot us, with his camera and then we adios-ed everybody and then we climbed into Buttermilk to come back home. 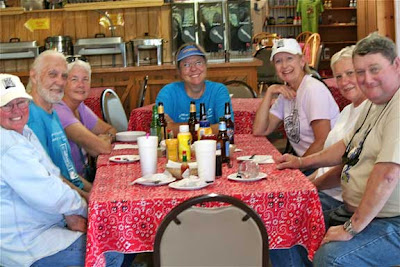 On our way home, Tony complained about his foot really hurting and then I complained about my back aching, because I had laughed so much, at June's birthday party. Then I started laughing, which hurt and said, "Tone. Someone should make a movie about us and call it, Brokefoot Hill & Brokeback Hill." T. chuckled and then he groaned, when he put his foot on the brake pedal, to miss a confused squirrel, that couldn't make up his mind about which way to go.

Around 3:30 as scheduled, Lola Falana arrived with Carol and we instantly fell in love with this adorable, sweet, little eight-year-old Chihuahua. Our friend Carol and her husband Calvin own the famous Cal-Bob's Smoke Shack, which is one of our and our volunteers favorite places to eat.

Carol had met Lola three weeks ago, when she was at the Kendall County pound, where the dedicated employees had kept Ms. Falana alive, for over seven months, so Carol made it a personal mission to help free Lola.

As we sat in the writing cabin, getting to know Lola, Carol went out to her truck to get Lola's stuff. "Here's her new, little bed, her new pink leash, some small bite doggie treats, a bag of Iam's dog food for little dogs, her toys and Calvin and I have meat and some leftover smoked Salmon for y'all to give to the dogs.

When it was time for Carol to leave, Tony and Carol drove down to the feed barn, to unload the meat and fish, I took this picture of Lola posing for the camera. 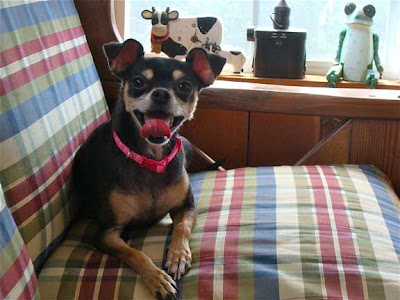 Even though Marcie, Kinky's sweet sister, had offered to foster Ms. Falana for us, until we have an opening, Tony and I decided that we would foster her, inside The Cabin, until we can find her the great family that she deserves, so if y'all know anyone that wants a really cool dog, please tell them about her.

As I finish typing this, I'm sitting on Mari's pretty, pink sheepskin and my back is feeling much better. Tony's foot is still hurting, but he is convinced that it was just a really bad sprain, so he is sitting in his office watching TV, with a frozen bag of peas or corn or okra packed around his propped up foot. And Ms. Falana is sleeping with her toys, in her bed, next to my feet. She sure is cute.

Y'all have a great evening!
Posted by cousin nancy at 7:18 PM