Is It Yours Or Mine!"

Today has been great. This morning at 6:00, I groggily climbed out of bed, instead of rising and shining as I had planned on, because I didn't sleep well last night, because Roy, Mama and Toto kept bickering about who got to snuggle with me. The final snuggling results were Roy - 5 times, Mama - 4 times and Toto came in last place with only 2 times. Sorry, little man.

After I had drank one cup of delicious coffee, I said a little prayer and then removed the bread dough from the oven and to my surprise, the inside of the oven was warm, because the recipe directions had suggested that I turn it on, to keep the dough warmer and it had worked.

As the dough sat on the large, lightly floured pastry cutting board, that my good friends, 'Erb & Karen, had given to me a few years ago, I dusted it with flour and then I folded the dough over on itself, front to back and side to side and then I had to kind of be a little creative on the next step of the recipe, which was to cover another cutting board with a large, cotton dish towel and then lightly sprinkle it with cornmeal.

Because I didn't have a giant dish towel, big enough to cover the 2nd cutting board, I went to Plan B and then I went to our closet and pulled out one of my many cleaned, blue, cotton, denim work shirts, that I am always wearing.

Right before Tony left, to go to the Old Timer, to drink coffee with his friends, he walked into the kitchen and saw the big lump of bread dough dumped out, on top of my faded blue work shirt, with me carefully sprinkling cornmeal on it, he started laughing and asked, "What in the world are you doing? Your recipe calls for a work shirt? Is it yours or mine?" 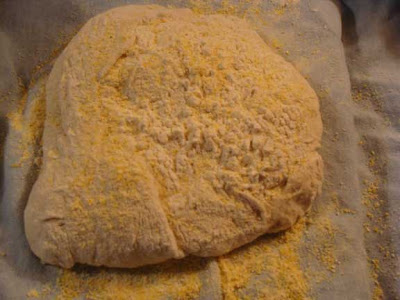 "It's mine. Yours are all dirty and I don't have a giant cotton....," I explained, as I covered up the bread dough with my work shirt. "Now, I have to let it just sit here and rise for at least two hours, so it can rise some more. Then it will be ready for me to bake it." After Tony said goodbye and had left, I grabbed a large pot, filled it with water and started heating it, because I was going to cook us up a pot of Cousin Nancy's Beans, for us to eat for lunch, because T. loves my beans so much.

Three hours later, after we had done our chores outside, I put Tony's heavy, empty dutch oven, with the lid on it, into the oven and cooked it for the required 30 minutes, at 450 degrees. Then I asked Tony to please help me remove the hot thing from the oven, so the bread dough could be put into it and then be baked.

Not wanting me to get burned by his dutch oven, Tony lifted up my work shirt with the dough inside it and then he gently turned it upside down, so the pile of cornmeal covered dough would gently fall face down, into the middle of his hot dutch oven. Right before he place the lid back on and put it back into the oven, I took this picture of it. 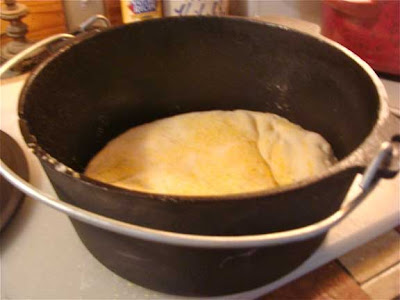 Fifteen minutes later, as I was holding my breath, Tony carefully removed his dutch oven from the oven and he set it down on top of the stove, next to the pot of nearly cooked beans. 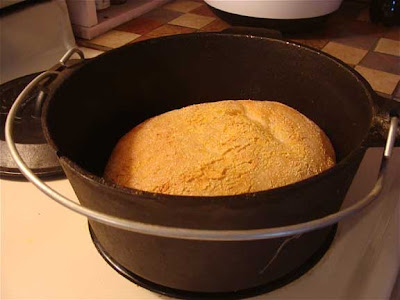 Then he removed the bread using a spatula and set it on a plate to let it cool. 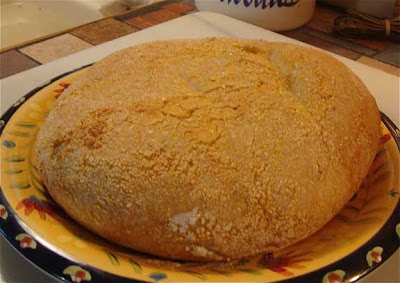 "Tone, if this tastes as good as it looks right now, it will be the very first time that I've made a loaf of bread, that was edible."

"I know. We've run out of doors that need a doorstop," T. teased.

Forty-five minutes later, the beans were cooked and my loaf of bread had cooled enough, so I half-hollered, down the hallway, "Tony! Lunch is ready. Will you come slice the bread for me? I'm so nervous about how the bread turned out, I'm afraid if I do it, I might just cut off a finger." 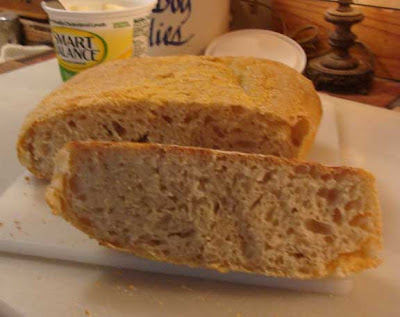 As I filled up two bowls, with my healthy, homemade hot pinto bean soup, Tony was the first to try my bread, at my request. "Omg," Tony said. "Nance, you've finally done it. Your bread is the best bread that I've ever eaten, seriously."

As Tony cut off a thin slice for me to eat, I seriously almost teared up, because I was so happy about finally cooking a decent loaf of bread, that wasn't as hard as a brick. When I took my first bite of the still warm bread, I could not believe how delicious it actually was, "I've done it, Tony! I really have. Can you believe this? I could not have done it without your help and your dutch oven..."

Because my No Knead Dutch Oven bread turned out to be so incredibly delicious and was so easy to make and because we've already nearly eaten half of the loaf, I walked 4 more miles with Leslie Sansone, late this afternoon. I truly do recommend this recipe to everyone, because it is so easy and so delicious and healthy. And right now, I'm thinking I just might make another loaf—using Tony's cleaned, blue work shirt, because the one I'm wearing is covered in bread crumbs.