This past week has flown by so fast, because we've been working either on projects here or working next door. And the weather has been so hot outside and inside The Cabin.

You see when we bought this place, a giant China berry  tree covered and shaded the entire cabin's roof. But last August after we had that tree removed, because it was falling down and leaning on the front porch—The Cabin heated up and our electrical bill literally went through the roof, because The Cabin has a tin roof—but no ceiling/ insulated attic.

Our August electrical bill back then was over $350.00 using our three window air conditioning units that could only cool down The Cabin to 82 degrees when it was 90 degrees or higher outside.

Tony and I love The Cabin so much and the roof rafters make it look so cool and much bigger. In fact, this past winter, if the sun was shining outside it heated up the tin roof and it helped heat our home. So it was sort of energy efficient for a while.

In April when the temperatures started climbing, Tony and I vowed not to turn on the window units until June or longer, so we would not have sky-rocketing electric bills to pay. And the good news here is last month's electrical bill was only $34.00. But the bad news is—we're hot and sweaty and our dogs are miserable.

So a week ago yesterday, a friend helped us install an attic exhaust fan to help pull the hot air out of The Cabin. And that helped. Because before, when it was 85-94 degrees outside it was always ten degrees warmer (hotter) inside The Cabin. (85 degrees outside/ 95 degrees inside.) And since installing the attic exhaust fan the indoor temperature is now only 2 degrees higher or matching the outdoor temperatures. It was definitely an improvement.

But that wasn't good enough, because this past week it has been incredibly humid and hot outside and the inside temperature of The Cabin, before we go to bed at night has been ranging between 80 to 85 degrees. So needless to say—our four-leggers and us have not been happy campers. We've been hot, sweaty survivors.

So, Sunday morning after Tony and I had another meltdown inside The Cabin, we decided that we had to put a ceiling inside The Cabin and insulate it, even though it meant hiding the beautiful rafters and knowing that this ceiling project would be costly for us.

So we did some research and then I called Ronnie to ask him what he would do. And Ronnie suggested that we do the bedroom first, so we could at least use it to keep us cool. Then Tony and I went to the Home Depot, in Kerrville, to buy the materials.

Because of cost, because we are old and because Tony has a bad shoulder we knew that the two of us could not lift up heavy sheets of 4'x8' plywood, so we decided to use boards instead. Because lifting one board at a time would be much easier for us.

Here is a picture of the bedroom before we started installing the ceiling boards and then adding pink, R-30 insulation. 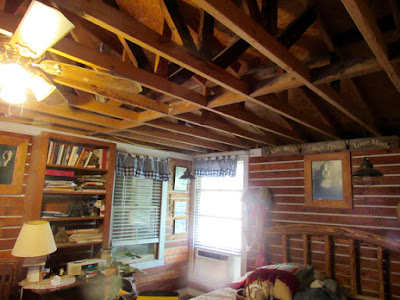 And here is what we had accomplished by Sunday afternoon/evening. 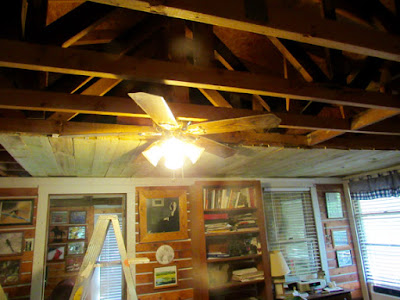 Yesterday, we had to go back to Home Depot and buy more materials and The Cabin in one big mess, which is driving me crazy. Because there is insulation, boards, cables/cords and tools scattered throughout The Cabin. 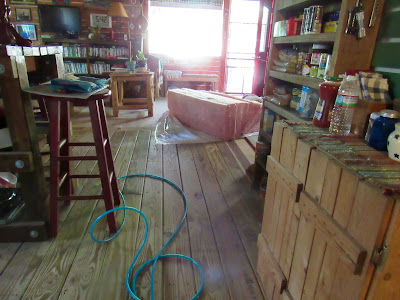 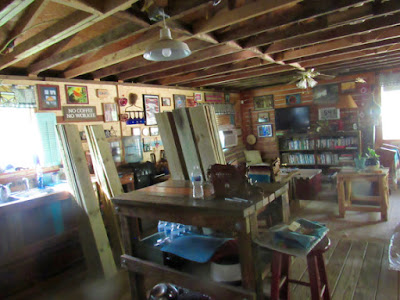 Last night, after we were totally exhausted from working on the ceiling, we called it a day. It was nearly 6:00 and I took this picture of the Atomic Clock which shows it was 88 degrees inside and 87 degrees outside The Cabin. 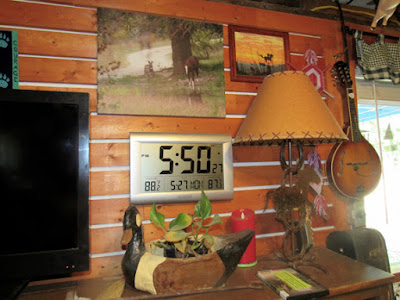 I took that picture, because I had planned to blog last night, but because it was so hot inside—I changed my mind and sat outside, on the front porch, with Henry Standing Bear, Little Debbie, Big Al(ice), Beau and Roy.

This morning as I finish writing this Tony is in Medina—getting his ears lowered (hair cut). And when he gets back home we plan/hope to finish installing the bedroom ceiling, so we can have a place to stay cool. And just so you'll know—we plan to keep going and install a ceiling in the kitchen/big room, too. And we will do it paycheck to paycheck until it is all done.

Y'all have a great day/evening, keep on laughing and stay cool!
Posted by cousin nancy at 10:31 AM

dang. speechless. not enough good words to express my admiration.