The past few days have been great even though nothing much has happened out here. In other words it has been a quiet week.

Friday morning, our super good friends/volunteers came out and walked our dogs for us and then we went to lunch, at the Apple Store, in Medina, because everyone was craving catfish. During our fun lunch Eileen, Lisa and I talked about the plot of our upcoming Longmire video, that will hopefully get all of us an invite to be guests of the crew and cast, on the Longmire set, when they are filming an upcoming Longmire Season 5 episode.

When we were discussing my outfit that I will be wearing (All pink, of course, except for my shiny, Alien-attracting helmet that does have pink ribbons.) I told them that I was planning on wearing my pink pajamas, pink robe and pink UGGS. Then I said, "I am going to dress Little Debbie exactly like me, except for the UGGS, because I doubt if they make UGGS for dogs.

"I bet I can find her some UGGS to wear," Eileen said. Then she picked up her phone and within seconds she had found several adorable pink boots that could pass as Chihuahua UGGS. And to say the least I was more than thrilled about it.

Also while we were talking about our wardrobes, Eileen or maybe it was Lisa suggested that I wear two braids, put wire into them and make them stand up, like Pippi Longstocking wore. And that got a big laugh even before I agreed to do it.

When I got back home, after our super fun lunch, I went Online and ordered some cute, pink, wannabe UGGS for Little Debbie to wear, for her upcoming starring role.

Friday evening, Kinky and I went on a fun hike with The Friedmans and when we got back to the Lodge, he told me that his kitchen sink was stopped up, so I offered to help him unstop it. It was pretty funny too, because while Kinky used the plunger, I stood next to him, holding a wash rag down, over the other sink's stopper, to help keep it from coming out, so the plunger would have as much pressure as possible on the pipes.

After about ten minutes of us taking turns with the plunger or holding down the sink stopper, Kinky gave up and declared that it was time to call in a plumber. I didn't want to give up, so I suggested that I go home, grab a bottle of vinegar and a box of baking soda and we give that a try.

Five minutes later, after pouring a full gallon of white vinegar, mixed with some baking soda, into the stopped up sinks, we stood back and watched the chemical reaction. And sadly, that was the only reaction we got from my efforts, because it did not unstop Kinky's sink. So we finally gave up and threw in the towel, so to speak.

Early this morning Kinky called me and he left this message on Carlton, "Nance, the plumber just left and he removed the clog. Call me." Click.

And this is about all there is to write about, except I want to show you this picture I took, this afternoon, that shows the kind of uneventful week it has been. 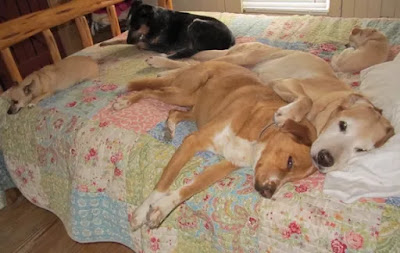 Y'all have a great evening!
Posted by cousin nancy at 6:26 PM