Is It Big Foot or Sasquatch?!

Yesterday our good friend, Debbie, the owner of the Old Timer, in Medina, called me around noon to tell me that her friend Mary had just rescued two Pyr pups, about 4-5 weeks old, and she wanted to know if we could help. "Nancy, I know that you have been praying for a Great Pyrenees to show up so you could rescue it ever since Mama died over a year ago. I definitely want one of them...."

An hour later, Tony and I were, in Debbie's back office, at the Old Timer, holding two precious, white, chunky pups, in our arms.

Within minutes, after Debbie and I talked about the puppies, I adopted the female pup and Debbie adopted her twin brother. And because Debbie is going to be so busy during the holidays we promised to take care of her male puppy for her, for the next couple of weeks.

So the reason why I didn't write anything yesterday was because Christmas came early for me, because I was too busy playing with these two adorable pups. Here is Roy and Big Al(ice) checking out the pups before we took the puppies outside to play. 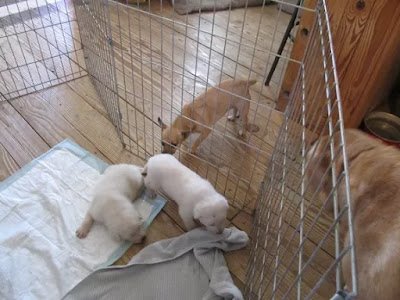 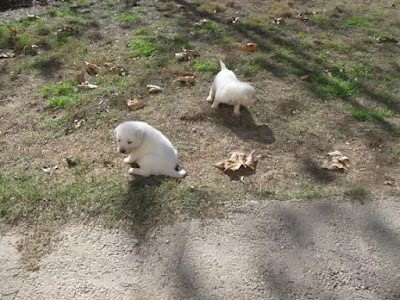 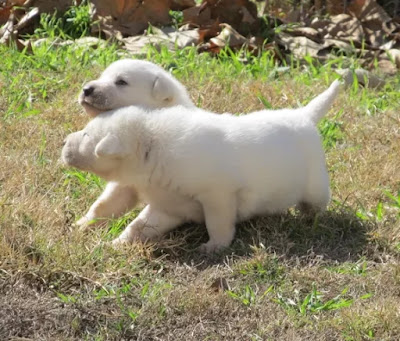 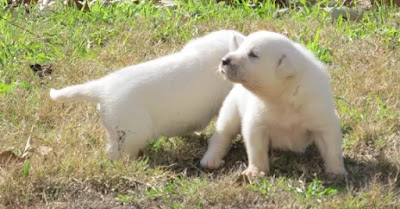 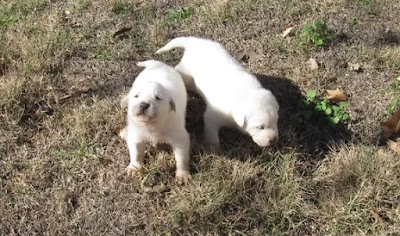 These two pups are very hard for us to tell apart, because they look exactly alike, so we have to pick them up and check to know who is who. This afternoon after we had a fun lunch with our dear friends/volunteers, at the Koyote Grill, Tony and I took the twins to Hoegemeyer Animal Clinic, to get them a check up.

The puppies rode in the big box that Debbie had given to us yesterday. They were quiet and slept the entire time and thank goodness they didn't get carsick. When Tone and I walked inside the clinic Susan greeted us and then the pups stole every one's hearts, that were in the lobby. "What are their names?" Susan asked.

"One is Big Foot and the other is Sasquatch," I stated.

Then Susan came out to take the young, gentle giants from us. When I started to hand my pup over to her, she asked, "Is it Big Foot or Sasquatch?"

Then Tony took a quick look at the puppy he was holding, and said, "Nancy's is Big Foot. I've got Sasquatch."

Tony and I had a fun visit with Dr. Janssen as he and his sweet assistant weighed the pups and then took their temperatures and stool samples. The pups each weighed 5.5 pounds and yes they had worms. And after Dr. Janssen de-wormed them and given them a clean bill of health, he told us to please bring them back in two weeks to get their first puppy shots.

And that is about it for tonight, because I am going to go put a pink collar on "Sassy" and then play with these two adorable twins that I truly believe were heaven sent from Mama and my parents.

P.S. My dear friend Mari sent me this super cool, feel-good wedding video. The groom and groomsmen lip sync My Girl to the new bride. Just click here and scroll down the page to view it. The puppies and this fun to watch wedding video have made my day great. "Thanks Mari!"
Posted by cousin nancy at 7:17 PM

AWWWW Congratulations on those cutie pies!!! What a great Christmas present!!!