Today has been great and so was Monday. Yesterday afternoon, while I was waiting to check out our groceries, at the big H-E-B, I glanced over at the magazine rack and the cover of the Newsweek magazine caught my attention big time and it was a special edition. 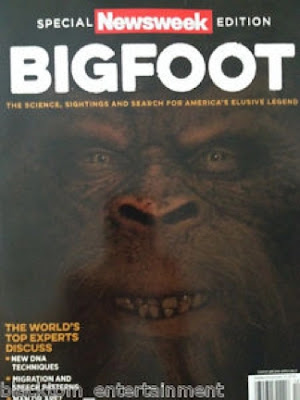 It sort of freaked me out, because I was wearing one of my favorite hoodies that has a Big Foot on the front of it, that my dear friend, Cindy Pickard, gave to both Chet and me when we visited her & Jody, in Northern New Mexico, this past June.

Cindy's good friend, Jonathan Warm Day Coming, a very famous Native American, Taos Pueblo artist designed the beautiful sweatshirt for her along with six others, that represent the Seven Sacred teachings of the Anishnabe People. And we got to meet him and he looks just like Henry, who Lou Diamond Phillips plays, in Longmire.

Big Foot represents Honesty. And hear are pictures of the front and the back of my sweatshirt that I was wearing. 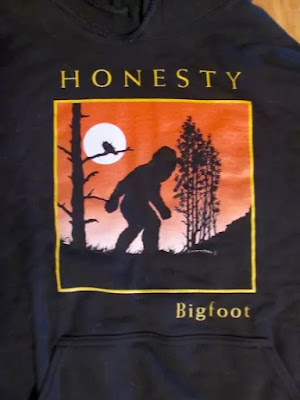 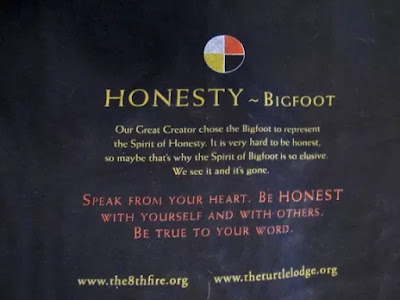 Cindy sells these beautiful hoodies, handmade crosses by Jody Armijo, pillows, posters and much more, at her super cool, website store: Pooh And The Brown Piglet. And please note that her hoodies are not covered in Roy's, Belle's, Beau's, Little Debbie's and Big Al(ice)'s dog hair, like mine is, in the pictures above and all of the rest of my clothes that I wear.

Anyway, last night Cindy and I were talking on the phone and I told her about Big Foot being on the cover of a special edition Newsweek magazine and she told me that Big Foot is very popular, all around the world and I found that interesting, because I love Big Foot and seeing him is near the top on my bucket list.

"Jody can't make the Big Foot plaques fast enough, because people are always ordering them from us and Jonathan's and my Big Foot hoodies are the number one best sellers."

"Do you have a Big Foot plaque for sale?" I asked, because I already have one of Jody's beautiful "Bear is Courage" plaques that always gets compliments." Here is my Bear plaque that hangs on the wall, above the big chair, in our big room. 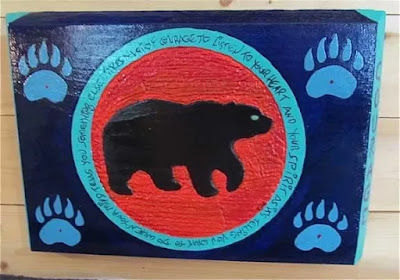 Cindy told me, "Yes, we have only a dozen left and he is working on more. There is a picture of one at the website store, but I will send you a picture of his Big Foot plaques. And ten minutes later, after Cindy and I adios-ed each other I checked my e-mail and here is her picture of Jody's awesome artwork. 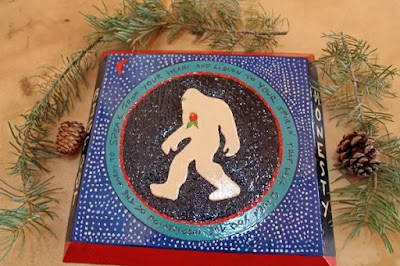 I loved it so much and knew that I wanted one, so I went Online and bought one at Pooh And The Brown Piglet store, as a Christmas present to myself. Then I went down the hallway and told Tony, "Thank you for buying me one of Jody's Big Foot plaques." Tony looked at me like he was seeing Big Foot, because he didn't know what I was talking about. So, I explained it to him and then I showed him Cindy's  Big Foot picture.

And tomorrow when we go to Kerrville, I am going to buy Newsweek's Special Edition on Big Foot.

Y'all have a great evening!
Posted by cousin nancy at 6:42 PM