Jimi's Got It So Right!

Today has been great. This morning Kinky called me and asked me to come over, so he could sing his two new songs. He wrote the pajama song and he and our dear friend Bob, from Louisiana, who years ago adopted, Mama, our sweet, three-legged Pit Bull, co-wrote. (Bob has been at the ranch, for over a week, baby sitting The Friedmans while Kinky was on the road and he left earlier this morning.)

I told Kink that I would love to hear them and that I would be over there in just a few minutes and then I told him, "I made homemade, blueberry waffles this morning. You want me to bring one over, with some bacon?"

Twenty minutes later after Kinky ate the breakfast that I brought him we went into his office, so he could sing me his two new songs. He sang the pajama song first, which was totally awesome and it gave me goose bumps. Then our good friend Steve showed up.

After howdies and hugs we realized that Louie was missing. Louie Friedman is his adorable, black, long-haired Scottie mix, that I rescued a few years ago. To make a long story short, I was in Trigger, going over to Kinky's, when at our gate entrance I saw Louie, in the corner of my eye, that someone had just dumped. I got out of the truck and called him to me and he ran to me.

By the time we got over to the Lodge, I told Kinky about just rescuing Walter Matthau. "I think I am going to adopt him," I remarked, to deaf ears.

"No, I want to adopt him," Kinky stated, matter of factly. "And I am going to name him Louie Friedman..." So, I am officially Louie Walter Friedman's God mother.

Anyway, Kinky and Steve grabbed a bag of apples and carrots and took off to hopefully go find Louie and to also feed the apples and carrots to Maya, Roy, Gabby and Little Jewford. I opted to stay put, in case Louie showed up. "I'll honk if Louie shows up here," I said, as they and three of the Friedmans drove off, inside Mr. Green Jeans.

Two minutes later, Steve, Tony and I were in Kinky's office listening to Kinky sing his two new songs for us. And to say the least—we loved them. Then we had a short, fun visit with Kinky and Steve. Before we adios-ed them I told them my newest favorite quote by the late, great Jimi Hendrix, "When the power of love overcomes the love of power the world will know peace." And they loved it as much as I do. In fact, Kinky even repeated it after me, and said, "That's one great quote."

When we got back home Tony went outside and then came back inside. "Nance, yesterday this came in the mail for you, but I forgot to give it to you. Sorry about that. I think it is from Cindy Pickard."

"I bet it is. Cindy told me the other day that she was sending me a small gift, in the mail. Will you please open it for me, so I can fill up the dog's water bowl?" This is what my dear friend, Cindy, sent to me. I absolutely love it and I don't consider it a small gift! 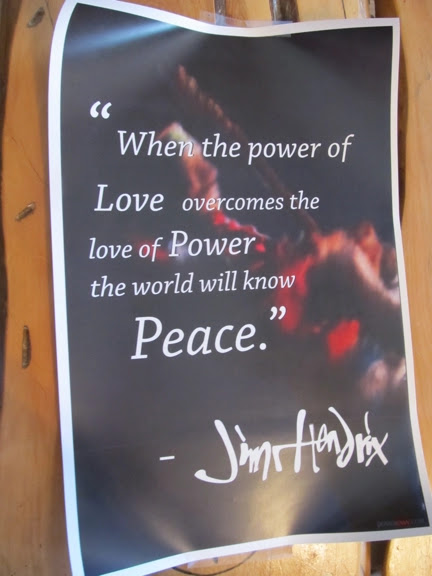 "Oh my goodness! I love it! Last week I wrote Cindy an e-mail about discovering this awesome quote by Jimi Hendrix. I can't believe that she sent me this poster. I can't wait to get it framed and hang it on the wall, because Jimi's got it so right. All we need is love."

Y'all have a great day and evening!
Posted by cousin nancy at 1:22 PM