Tug Of War! or I Love Whiskey!

Yesterday was too much fun. Ruth Buzzi and her husband Kent called us around noon and invited us to meet them for lunch, at the Apple Store, in Medina aka the Apple  Cider Mill and they also invited Chet, too, but he couldn't go, because he was busy.

When the four of us walked inside, the Apple Store, Tony and I introduced our good friends to Barbara and then to Dawn. And we had a super fun time eating lunch with them. And if Ruthie wasn't cracking us up with hilarious stories and jokes—Kent was.

All kinds of people were excited about Ruth Buzzi being there and several fans of all ages, asked her to please let them get their picture taken with her. And after Ruthie had posed with all of them, we asked Dawn to please take a picture of us with Kent and Ruthie, because Ruthie and Kent had already posed with her earlier. 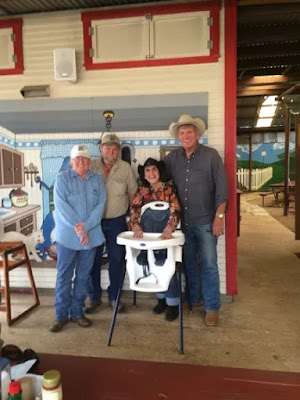 Before we left Medina to come back to the ranch, I asked Ruthie and Kent if they would mind stopping, at The Old Timer, because I wanted to introduce them to our good friend Debbie, the store owner and her super friendly employees. Here's a picture I took of Ruthie posing with Debbie and her adorable Great Pyrenees pup. 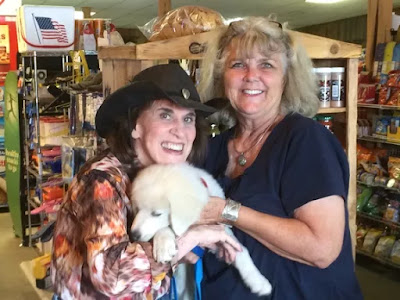 Then Ruthie met everyone of the employees and she posed for pictures and then she visited with all them. And to say the least, "Everyone, inside the Old Timer, was totally thrilled about getting a chance to meet the sweet, famous stage, television and silver screen Ruth Buzzi."

Before all of us left the Old Timer, Tony and I invited our friends to come over to the rescue ranch so we could visit some more with them and Chet O'Keefe.

Chet greeted us at the front door and after howdies and hugs, Kent said, "Chet Ruthie and I love your music and we wish that you would play a song or two for us." And seconds later, Chet was sitting on a stool, playing my guitar and singing one of his great songs for all of us.

After Chet sang three songs there was a knock on the front door and there stood sweet Marcie, Kinky's younger sister, with our good friend Nelda. "Hi y'all!" I said. "Come on in. Y'all know everyone. Chet's playing music for us..."

And a few minutes later, after Chet had sung another song, Kent said, "I wish I had a piano to play, so  we could play some music together."

"We do. My keyboard is being stored inside the Mother Ship. That's my RV that I am fixing' up. Let me go get it for you." Then I took off to go fetch it.

A few minutes later, Chet and Kent were jamming and they sounded fantastic. They took turns playing Chet's songs and favorite, old classic songs that Ruthie loves. It was totally awesome. 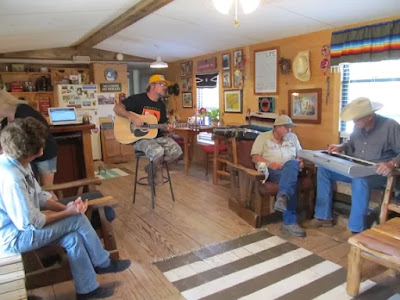 When Kent and Chet started singing some old Willie Nelson tunes and Blue Grass songs, I went back to my office and grabbed my old guitar that Ronnie made for me. Then I sat in with them and played along with them.

When it was time for Ruthie & Kent and Marcie and Nelda to get back over to Kinky's, Chet and Tony left too, so they could try to fix Marcie's car.

And twenty minutes later, I phoned Kinky to ask him to please go tell Tony that he needed to get over here fast. Then I went back outside.

Two minutes later, they drove up in Kermit. "Thanks for getting over here fast. This woman has this dog and...."

After we told her that we would take her dog Whiskey and the nice woman had quit crying. We talked about what pen to put Whiskey in, because Whiskey, who looks exactly like our Belle, but she is a little darker tan, has issues about being left alone without another dog being with her. "You can put her in with Willie," Chet suggested. "Whiskey and Willie already seem to like each other."

Last night Chet, Tony and I went over to the Lodge, so we could have another fun visit with Ruthie & Kent, Marcie and Kinky.

This morning when Chet came inside The Cabin, he laughed and said, "Whiskey is a really great dog and she loves to play with Willie. They woke me up this morning, because they had found one of my socks and they were playing tug of war with it. Seriously, they had my sock stretched twice its size. It was a lot of fun to watch. I love Whiskey and so does Willie..."

Today has been great even though it is sadly, once again, M.I.R. Time (Mercury In Retrograde). I've had a very busy day and tomorrow I will post a picture of our, new, two-year-old, rescued Whiskey.

P.S. Mari, I love the funny comment that you made on my last post about Chet and I doing dumb things on our trip to Terlingua. In fact, I am still laughing about it. And tomorrow, I will also write about Chet and me breaking the law as we were driving out to Terlingua.

Ok this time I made MYSELF laugh. At first glance at the picture of the 4 of you taken in Medina, I thought Ruth Buzzi was standing behind her adult potty chair! My mind raced, wondering why you would embarrass her like that?

THEN I realized what I was REALLY looking at. And I began to laugh...and laugh...and laugh.. and renew all the ache in my cheek muscles and tears running from my eyes - all of which have been getting plenty of use thinking about you and Chet in Terlingua!

I owe you big-time for all this laughing on my part, so now we HAVE to do lunch so I can tell you about my OWN 'Terlingua Chenancy' mistakes of the past. Bring your back meds, cuz you're gonna LAUGH.

Hi Mari! Let's do lunch next week or as soon as possible, because I can't wait to hear about your Terlingua Chancy. I was trying to figure out what Chancy meant, until I just realized you're talking' Own "Chetnancy."
Who knows? I might just include it in #3 novella.

P.S.And I'll be sure to bring the pink dyed sheepskin, that you and David gave to me for my back! Tony is going to have to risk his back pain.

Awww what a grrrreat time you all had

Hi Karlee3! It was a fun trip and I am thrilled about getting so much writing done. Thanks for commenting.