Today has been great and so was my trip. While I was in Terlingua I wrote, wrote, wrote and I am very thrilled about how much I accomplished. Seriously, I think my book is ten times funnier that it was before Chet and I took off for Terlingua.

For the past several months I have been wanting to take a few days off and go somewhere, so I could focus entirely on my book. So, early last week when Chet told us that he had four-back-to-back gigs to play, in Terlingua, Tony suggested that I ask Chet if I could carpool with him, so I could work on my novella.

After we got out there Chet and I basically went our own separate ways. While he was busy playing his gigs or out visiting with his friends, I stayed put, inside my cabin, either writing or dictating to my computer.

Saturday night was the only time that I wasn't writing, because I went with Chet, to the famous Starlight Theatre Bar and Grill, in the ghost town, because Jim Keaveny had asked Chet to play with him and his awesome band.


It was an awesome night of incredibly great music. In fact, it was an evening that I will never forget, because they had the place rocking' with Country, Americana, Blues, Blue Grass, etc. music. 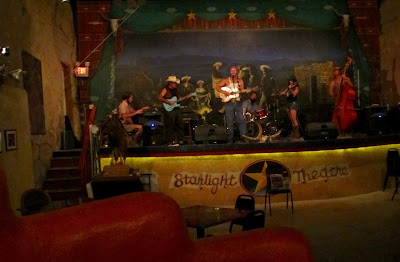 A couple of funny things did happen on our Terlingua trip though. Late Sunday afternoon I took a short break from my writing and I went down to the Bad Rabbit Cafe to grab a fast bite to eat, because I could not wait to get back to my writing.

After I ate, I was walking back to my cabin and I was so focused on what I was going to write next, I did the dumbest thing. When I got to my cabin I walked up the steps and tried to put my key in to unlock the door, but the key wouldn't open the door. So I tried a couple of more times and then gave up.

When I started to walk back down the steps, to go to the Office, I saw there were three more cabins down the hill and it didn't make any sense to me, because my cabin #45 was at the end of the row of cabins, that all looked exactly alike.

Then it hit me like a brick! I realized that I was at the wrong cabin. Mine was three buildings down. I felt so stupid and vowed not to tell anyone, especially Tony or Chet, because I knew that they would tease me. I was thankful that no one had seen me do such a stupid thing, because they would have thought that I was trying to break into a cabin. And I was also glad that no one had been occupying the cabin that I was trying to get into. 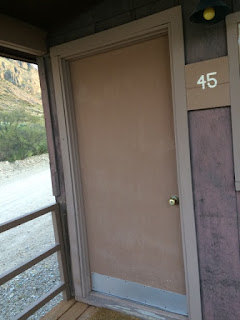 On our way back yesterday we made a quick pit stop, in Sonora, to fill up the car and grab something  that we could eat on the road. When I was paying for my food I thought I heard Chet say, "I'm going to get a burrito," as he left the store.

So I asked the clerk, "Did that man just say, "I'm going to get a burrito?" Then the woman gave me the funniest look, like I was crazy or something. So I went back to our white car and got inside.

A few minutes later, Chet walked out of the store and he was busy reading his text messages.  He went to this white parked car, next to us that looked exactly like ours and he opened the door to get in. And you should have seen the startled look on his face, when he saw the man sitting behind the steering wheel. Then he looked through the car's windows and saw me laughing.

When I quit laughing, I said, "I'm so glad that you did it..." Then I confessed to him about going to the wrong cabin and because I am hard of hearing and asking the cashier if you had said, "I'm going to get a burrito. And her probably thinking that I was crazy."

We laughed at ourselves the rest of the way home. We got back around 6:00 and within ten minutes we had confessed to Tony about the dumb things we had done and he is still teasing us about it.

I am so glad to be back home with Tony, Roy, Belle, Beau, Little Debbie and Big Al(ice) and tonight, after we go over to visit with Kinky, Ruth Buzzi and her husband Kent, Sean Rima and Marcie, I plan to do some more writing. And that's about it for tonight.

Okay, it's Day Two and I am STILL laughing over the Burrito comment, not to mention Chet's gaffe and your 'almost breaking and entering' crime!

Please post something else so I won't be reminded when I click on your blog. I'm liable to bust a gut at the rate I'm laughing!

Hi Mari! All of us are still laughing about it and when Chet and I told Kinky, Marcie, Kent & Ruthie and Sean about it they too thought it was hilarious. Of course, it would not be so funny if I were in prison doing hard time, because I tried to break into a cabin or in a funny farm, because I had asked a stupid burrito question, and Chet in serving time for trying to steal a parked, white, Hyundai Santa Fe.

Maybe I'll try to work some of that into my third novella.