Scrubbing Bubbles! or The Girls From Bavaria!

Today has been great and so was yesterday. Early this afternoon we had Claudia and Kathrin, two lovely women, from Bavaria, Germany, come out to the rescue ranch.

I was inside The Cabin when they arrived. In fact, I was in the bathroom, down the hall, cleaning the toilet, when Tony comes inside and says, "Nance, where are you?"

"In the bathroom. Cleaning the toilet," I half-hollered. "Why?"

"Two very nice women, from Germany, are here and they specifically came out so they could meet you and see the rescue ranch. And they want to get their pictures taken with you. You'll like them."

"Y'all, come on inside," Tony said, as I flushed the toilet and Little Debbie and Big Al(ice) barked non-stop. "Nancy wants to meet y'all, too." Then I walked into the big room, which was a little bit messy, because I had not yet put away my art supplies, that I normally store in my office.

I had not put my art supplies up, because last night, after I got tired of working on "Little Debbie Dancing In The Dirt With Friends" my multi-media, work-in-progress, of her wearing a cowgirl shirt, a pink bandanna, a Poodle skirt and pink boots, that look like my boots. I had taken the time to neatly stack all of my paints, brushes, colored pencils, etc., on the cedar bench, that Tony made for me, over nineteen years ago. When we were still living-in-sin, in Utopia, because I was planning to work on it some more today. But that didn't happen today.

And the reason that I am working on this Little Debbie artwork project is because she is fixing' to have her own Blog. But I will tell you more about that later. 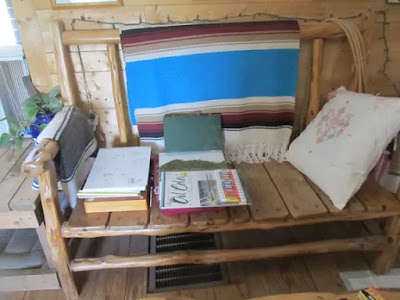 Chet, Tony and I had a total blast meeting and visiting with Kathrin and Claudia. They are charming women and both of them are writers and journalists. And Claudia writes about the music industry and musicians for Mittelbayerische Hier lebe ich.

During our fun visit with "The Girls From Bavaria" Chet gave them signed copies of his Cd's, I gave them signed copies of my  books and Tony showed them several of his awesome photos that he has taken. But Little Debbie and Roy were the stars of the show, because Claudia immediately fell in love with Little Debbie and she kept holding and petting her while Roy flirted non-stop with Kathrin.

Then when they took a few pictures of me signing the books and Little Debbie posing with me, they got to laughing, because Roy kept trying to get into the pictures. In other words, "Roy is definitely not camera shy." Here is a picture I took of our two newest German friends. Kathrin is the one, on the left, holding Little Debbie in her arms. 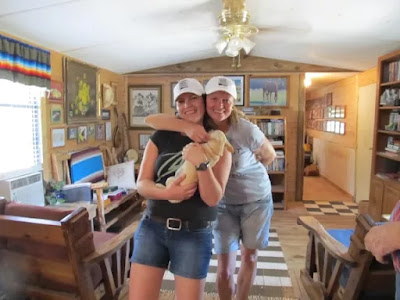 Before The Girls From Bavaria left, we invited them to come back this evening, so we could take them over to meet Kinky, because they are Kinky fans, too and Claudia attended one of his German concerts.

And that's about it for today, because I'm either going to do some more writing, work some more on Little Debbie Dancing In The Dirt With Friends project or else work on Little Debbie's upcoming Blog, before Kinky returns to the ranch and Kathrin and Claudia arrive.

Y'all have a great evening!
Posted by cousin nancy at 4:50 PM

What a very fun time!!