Today has been great, but first I need to confess something. Chet and I actually did break the law on our way out to Terlingua. And we didn't get caught thank goodness.

When we were going through the big windmills area, on I-10, Chet spotted something shiny, on the side of the highway and he commented about it. We were driving 80 mph and a few minutes later, he asked me if I minded going back so he could get it.

Within 30 seconds, we had exited the highway, because there was an overpass up ahead. Then Chet took a left hand turn, then another left hand turn and we got back on I-10—heading east. A few minutes later Chet spotted the shiny object and we drove past it.

We drove and drove hoping there would soon be an overpass for us to cross back over to the other side, but unfortunately all we saw was giant windmills, dirt and cactus. So Chet suggested that we find a flat area that he could drive across to the other side.

Knowing that it was against the law to do that, I said, "Okay." Which then made me an accessory to the crime that we were about to commit. And that made me a little nervous to say the least.

A few minutes later, while I was holding my breath and silently praying that the Law was not in our vicinity, Chet slowed down, pulled over to the left lane and then we crossed back over to the other side and started heading west, again. And that's when I started breathing regularly again.

Several miles later, we spotted the shiny object again and we pulled off of the road to get it.  It turned out to be a really cool-looking, hug, silver, 18-wheeler hubcap. And Chet was thrilled to get it and I was thrilled that we hadn't been caught breaking the law and have to go to prison for ten long years. So I told him, "Chet, if we had been caught breaking the law I think I would of told the Officer that we were just trying to clean up the litter, on the highway. You know, don't mess with Texas...."

Well, today is the second day of M.I.R. and it actually has been a great day for me. All of our great volunteers/good friends came out and walked our dogs for us, and I want to say, "Thank you, June, Ellen, Jim M., Eileen, Lisa, Kris & Jim, Suzanne and Chris. Y'all are the best!"

All of us went up to the Koyote Grill for lunch and as always it was a total blast for me. At my end of the long table we talked mainly about the Longmire Season 4 and how great it is and several Longmire fans, at the table agreed that is one of the best series out there and that it is snowballing and just keeps getting better and better with each episode.

After our super fun lunch with our good friends Tony and I took off for Kerrville to run several errands and we got back home around 4:30.

Before I finish writing this tonight I want to show y'all three pictures I took, this morning, of sweet Whiskey, that Chet and his dog Willie are temporarily fostering for us. Chet loves this sweet female dog and he is amazed about what a great dog she is. So here's Whiskey! 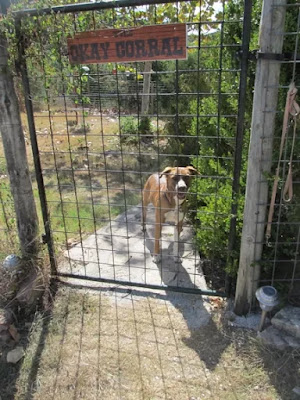 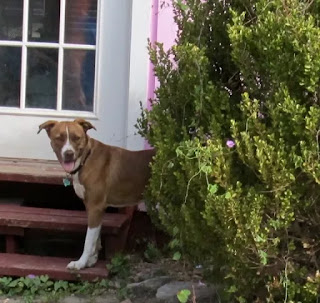 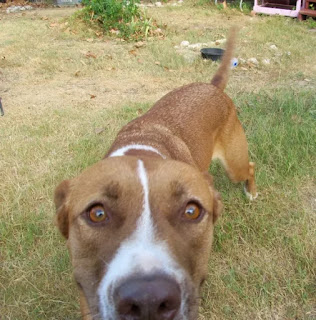 Whiskey is two-years-old. She is wonderful with little babies, kids and other dogs. She is house broken, she is not aggressive, not hyper, not a digger or an escape artist. She is trained and needs to have a companion dog. And her only problem is that she is not good with horses or cats. So in other words she is one super dog. So come on out and adopt her tomorrow! And that's about it for tonight.

Nancy, I don't think you would look good in Texas' black and white stripes or bright orange. And the only prison I've seen with pink outfits is in the hot Arizona desert! All I can say is that you'd better think about that before going on your next "crime" spree!

Heed what I say...: Lead me not into temptation. Oh wait, who am I kidding? Follow me - I know a shortcut.

Mari, I am still laughing and as that old song says, "I will follow you....."