Today has been really great, even though it didn't start out good, because of an electrical power outage that lasted for over seven hours. When Tony woke me up at 6:00 this morning, as I had asked him to, so I could do The Harley Show, he said, "Wake up, Nance. We have no electricity. I have already called the Bandera Electric Cooperative to report it."

When I climbed out of bed The Cabin was really cold, so I quickly dressed in my winter uniform: navy blue turtleneck, pink sweatshirt, 501 Levis, heavy socks, pink cowboy boots and then I put on my pink Carhartt jacket. And I was still cold, when I came into the dark kitchen, ready to make myself a cup of Donut Shop coffee, in the dark and that's when it hit me—no electricity—no delicious coffee—no breakfast—no Internet, no running water, etc. In other words, "Let's just say that I was not a happy camper." Then Tony bid me farewell and left to go drink coffee with his friends in Medina.

At 7:45, when I called Harley Belew, to do his popular morning radio show, The Harley Show, a five to ten minute segment about our rescue ranch, it was pretty funny and went something like this. "Good morning, Cousin Nancy. How are you doing?"

"Not so good, Harley, because we are experiencing an electrical power outage and right now it is fifty-seven degrees inside The Cabin..."

"Well, I hope your power comes on soon," Harley said to me. "So, tell me who is Harley's Pet of The Week." Which made me chuckle.

"I can't Harley. I can't get on the Internet." Then Harley laughed.

"Let me get on utopiarescue.com and tell you." A few seconds later, Harley told me that Lois Lane was his pet of the week. Then I told him all about sweet Lois Lane. When my Utopia Animal Rescue Ranch ended, I paced back in forth in the big room, until Tony returned home from The Old Timer, in Medina, Texas.

Then my friend Alfred, in Von Army, Texas called me to see if I had received his Christmas present. "No, Alfred. It has not arrived, yet." Then he and I had a fun telephone conversation. Before we adios-ed each other, he told me that he was going to track his package and get back to me. Then Bandera Electric called me to discuss our power outage. Then a few minutes later, Julie, at the Medina Post Office called me to ask if I had received Alfred's package. "No, Julie, but Kinky received a box the other day and maybe that is it. I'll drive over to The Lodge and check to see if it was from Alfred and call you back." Then I drove over to The Lodge.

When I arrived at The Lodge, Marcie was wrapped in blankets. After we talked about the missing package and the power outage, she told me, "I was up late last night and around 2:30 there was a loud explosion and all of the power went out and it came from that direction." Then I checked to see if Alfred's package was in Kink's mail. Then I came back home.

"Hello, Julie. It's Nancy. Kinky's package was from someone else." Then she told me that she had tracked it and found it. The package was in Dallas and on its way to the Medina Post Office.

A few minutes later, at 9:32, the electricity finally came back on thank goodness and it was fifty-seven degrees inside The Cabin, so I cooked us breakfast and drank a cup of coffee while I did it. 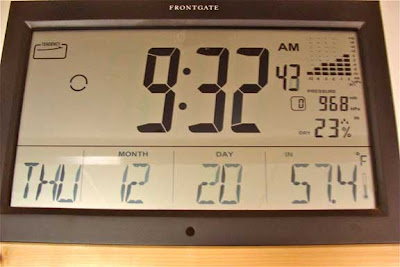 After we ate breakfast Kinky called me from Portland, Oregon.

What would Eileen do? said...

We didn't have a power outage like you did but the Fab 4 Vols decided it was just blame too cold to walk dogs this morning since it was 37 degrees at 9 am! We texted and called each other and that was the final decision! See how dedicated your Fab 4 Vols are to your dogs - LOL!!!! Don't you just love electricity? I do! Glad your's is back on and you can have K-cup coffee again! Will see ya'll and the dogs on Christmas morning early for their Christmas breakfast from the vols! FAB 4 E