Today has been great. Early this morning my friend Alfredo, called and left a message on Carlton, "Nancy, I've been tracking that gift package that I sent to you and Kinky over a week ago, that got lost in the mail. It is now at the Medina Post Office. So, if you want to get your holiday gifts, please go to the Medina Post Office before noon today. I hope you like it. Merry Christmas."

After washing our breakfast dishes and cleaning up our dishes I took off for Medina for three reasons. First, I went to the post office to pick up Alfredo's box. Then I went to the Medina Ace Hardware Store. "Merry Christmas, Nancy," Andy, the store owner said to me as I walked inside. Then he handed me a beautiful calendar."

"Merry Christmas everyone," I said as I browsed through the calendar. "I love your Hill Country wildlife calendar."

"Tony should do a Hill Country calendar," Andy said. "His Hill Country photos are as good as these or even better. What can we help you find?"

"I need to pick up two, five-gallon plastic buckets for our dog's Christmas dinner." Four minutes later, I stopped at The Old Timer to pick up some scratch-offs for stocking stuffers for Tony. Then I returned to the rescue ranch.

Since Tony and Brandon, from the Medina Children's Home, were still working outside I carried Alfredo's big box and the scratch-offs up to The Cabin. Then I sat the stocking stuffers on the drainboard and then I sat Alfredo's box on top of them.

When I opened up Alfredo's box, I read his beautiful card that he had personally made for me. Then I opened up his present and I loved it. Alfredo Salas had sent me a Scentsy Warmer, a wickless air fragrance with two scent packs of Cinnamon Bear and Clove & Cinnamon! After I had screwed the lightbulb in and turned it on, I put a Cinnamon Bear wedge on the top of it and our trailer instantly began to smell of cinnamon. To say the least, "I loved it," because I couldn't smell the pot of beans that I was cooking." Then I saw Alfredo's business card. If anyone wants to buy a Scentsy Warmer, please go to his website to buy one: www.alfredosalas.scentsy.us. Here's mine in action. 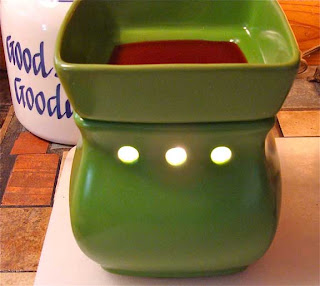 After I removed Alfredo's card and wickless warmer for Kinky, from Alfredo's box, I removed the big box from the drainboard and saw that half of Tony's scratch-offs were floating in the dish water. After trying to dry them with paper towels I put the water-logged scratch-offs on a towel in our bedroom, in hopes they would dry and be scratchable for Tone.

When T. and Brandon came inside The Cabin, I handed Tony the scratch-offs, that had not fallen into the sink and he was thrilled, because he had won twenty dollars. "Thanks, Nance."

"There's more, but they are still drying," I said. After I told him about them falling into the kitchen sink, he laughed and then he raced into the bedroom to see if they had dried.

"They're still pretty soggy," he said. "I'll scratch them later.

Around 2:00 today, while Tony was helping our friend move into a new house, I wondered if Tone had remembered to take our turkey and the ground turkey and sacks of mixed vegetables, for our dogs holiday dinner, out of the freezer, so they would be thawed out tomorrow morning.

A few minutes later, when I went down to the barn I found out—he had forgotten, which I can't fault him for, because I am so forgetful. I removed everything from the freezer and put it in buckets and then carried the frozen food into Outer Space, so the sun could help it defrost. 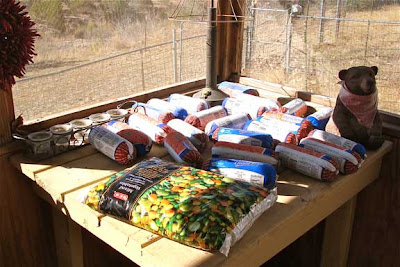 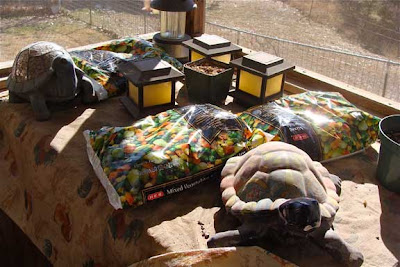 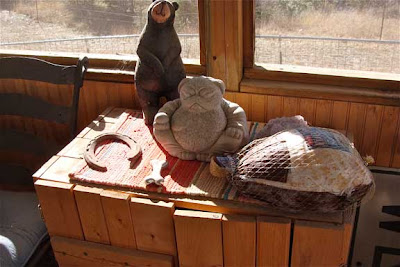 As I finish writing this, our turkey is in the oven still defrosting. The dog's ground turkey is taking turns soaking in hot water in the kitchen sink, while also slowly thawing on top of the stove. 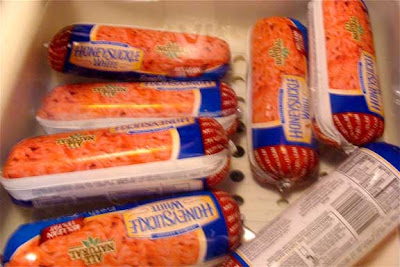 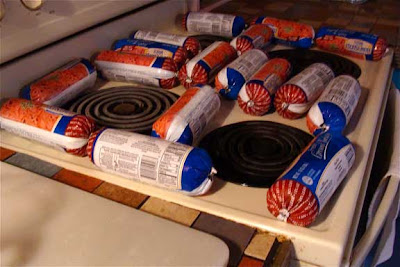 Tomorrow morning, Tony and I are getting up at 5:30, so we can have everything ready to go, before Brandon and our super friends/volunteers show up at 8:30 to help prepare and serve our rescued dogs a delicious, warm Christmas dinner, compliments of June, Ellen, Eileen, Jim and Kris & Jim, "The Mountain Man."

Y'all have a great evening!
Posted by cousin nancy at 7:31 PM

Ok so now I'm hoping everyone is too busy to read your blog post tonight because I see next year's Christmas gifts for SEVERAL folks on the 'scentsy' website!

I've already ordered one for our place and just MAY (big grin here) have to order a coupla more before I'm done - after all, we have two stories in the main house and a guest house!

Thanks for yet another good lead on a quality item!

Merry Christmas to you, Tony, and everyone else who reads this blog!

Hi Mari. You will love it.

Hi Chelsea. I could not put your comment here, because it has your e-mail address on it. I sent you an e-mail and it might be in your spam folder. I cannot wait to talk to you about it.

Checking in with a late comment about our Scentsy that we tried today after receiving it last Friday. As you predicted, we DO LOVE it! David wants to buy 2 more for the main house here and at least one for the ranch house in South Texas. And we both knowingly looked at each other when we started listing how many of our friends and relatives would love one - for Christmas 2013!

Again thank you for the great 'lead'!