Today has been great. This morning Brandon came out to help Tony do the morning chores outside while I stayed inside doing some paperwork and answering e-mails. Around 9:45 Kris and Jim aka The Mineral Man came out to walk our dogs, even though it was pretty chilly outside.

During one of my fun walks with them, Jim and I talked about his delicious bread recipes, because his last loaf of bread that he baked for us was so delicious. Then we talked about his Oster bread machine, because I had just purchased one like his earlier this morning.

Around 12:15, Brandon went home to eat lunch, so we followed Kris and Jim over to Koyote Ranch to eat lunch together. And to say the least, "Our lunch was a lot of fun."

When we came back home I did a little more paperwork. Then I signed a few copies of my new book and went to Medina to mail them. When I got back home Brandon was back helping Tony.

Around 4:00, we had a very nice surprise—Vern's Christmas gift to us was delivered and it was a Lanikai concert series ukulele! When Tony opened its box I took one look at it and immediately named it, Tiny, because it was so cute. 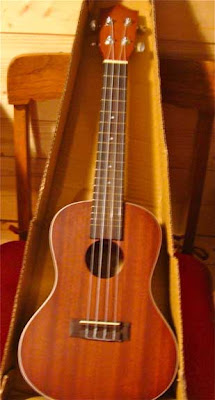 Then I tuned it and began playing it, because I learned to play the ukulele when I was either in the fifth or fourth grade.

Tiny has a beautiful sound, so I played it for a long time, because I was having so much fun. When Tony and Brandon came inside I showed Brandon a few basic chords and then I handed it to him, so he could play it, since he has never played a uke before.

Within seconds Brandon had all of us smiling, because he had already memorized the chords I had showed him and he was going to town with it and playing the tunes of several songs and quickly figuring out other chords.

After Brandon had picked out and played like a pro he said, "This is a sweet little instrument to play. I just might have to get one of these for myself..."

"I'm going to The Melody Corner, on Monday, to buy a case for Tiny and to get Stan to put a pick-up on her, so we can plug her into my amp," I said. "Please play us some more music." Twenty minutes later Brandon ended his free music concert and went home.

"Thank you, Vern! We love our uke and right now, Tony is sitting here playing Tiny and having a blast." And that is about it for tonight, because it is my turn to play with Tiny.

Y'all have a great evening!
Posted by cousin nancy at 7:09 PM