After we ate breakfast Kinky called me from Portland, Oregon. "Hi, Nance! I'll be back at the ranch late Friday night. I have two questions for you."

"Number one, is your novella about the rescue ranch?"

"No. Well, it is mentioned a couple of times, but it is about Carol and me going out to Northern New Mexico to help Fay solve a mystery. Why?"

"In about ten days I am going to be doing my monthly interview on one of San Antonio's most listened to radio stations and I want to talk about your novella..." His second question was about The Friedmans, asking me to baby sit his dogs when he takes off next week for a few days. And before we adios-ed each other he told me that he can't wait to see my book and he wants me to come over Saturday, so we can talk about it some more.

After Tony and I did our morning chores outside, we came inside and got cleaned up and then we took off for Kerrville, to go meet our friends Kris and Jim for lunch, at El Sol de Mexico.

Having lunch with Kris and "The Mineral Man" was a lot of fun and the food was delicious, as always. Before leaving the restaurant they bought ten more books from me and gave me written instructions on who to sign them to. "You don't have to sign them now, Nancy. We'll pick them up when we come out tomorrow to walk the dogs," Jim said. After we had thanked them for treating us to lunch and a fun time we adios-ed each other and then took off to run a few errands before coming back home.

Today has been great. This morning a few of our super dog-walking volunteers came out even though it was thirty-seven degrees outside when they arrived. Jim and Kris & Jim, like me were amazed that it didn't seem to feel that cold outside, because fortunately, the wind wasn't blowing.

After they had walked most of our dogs down to the creek and back we all decided to go up to Koyote Ranch's Koyote Kafe to eat lunch together and by that time it had warmed up to sixty degrees and the sun was shining brightly. Before leaving, I gave Kris & Jim their ten autographed books and Jim gave us a fresh loaf of bread that he had made earlier this morning and his nine grains bread smelled delicious.

Lunch was a blast and delicious and after we had finished eating, June, another one of our great friends/volunteers, walked inside the cafe, so we asked her to join us. Even though June had placed her order to go, she stayed and ate it at our table, because we were having so much fun.

When Tone and I got home I cut off two slices of Jim's homemade bread and wrapped them in foil. Then I set the oven to two-hundred-twenty-five degrees and warmed it for over forty minutes, because I was doing some paperwork and had forgot about it being in the oven, until I smelled its delicious aroma.

Before I had sliced Jim's beautiful loaf of bread and put it in the oven I took this picture of it. 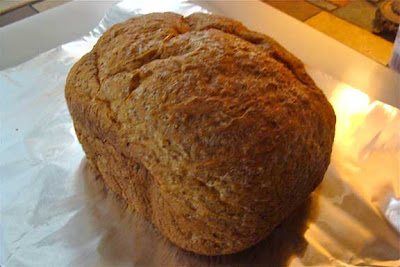 Tony and I loved eating Jim's delicious bread and after Tony went outside to go check on the dogs I decided to halve it and make his and her loafs, so Tony and I wouldn't fight over who got to eat the last piece. 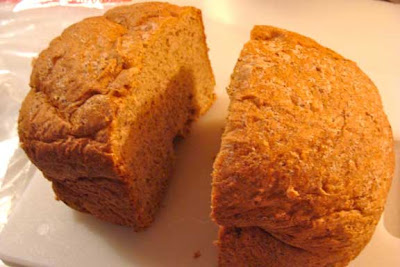 Then I put the halved loafs of bread into two large Baggies and wrote His  and Her, so not to confuse us. 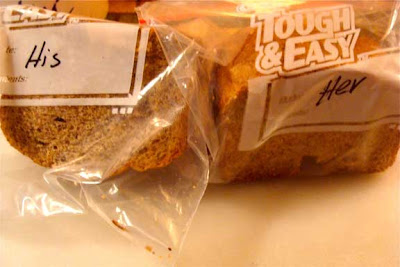 I'm glad that Kinky will be back at the ranch late tonight and I can not wait to see him tomorrow. I think Jim, "The Mineral Man," Bobbitt should open up a bakery specializing in bread. And that is about it for tonight.

Y'all have a great evening!
Posted by cousin nancy at 6:19 PM