The Mark Of Zero!

Today has been a lot of fun. This morning I got up early, fed the dogs, made breakfast and then I watched the show that Tony, Toby Keith and I did yesterday afternoon with Kim Williamson at KVHC. I really enjoyed the show even though I looked fat. Toby and Tone were great even though neither one of them said a word, because I talked too much as usual. If you want to watch the show please click on the links below. Thank you, Kim, Brian and Roland! We love y'all and are looking forward to doing more shows in the future! KVHC Rocks!


After watching the KVHC morning show, I decided not to walk and my excuse is I wanted to finish getting our front porch painted or at least some of it before it got too hot. So, I put on my painting clothes, an old pair of navy colored sweat pants and an old t-shirt and my retired Pepto Bismol colored Crocs, then I grabbed the Bose iDock and went outside with it—I was ready to sling some paint.


As my favorite music played I slapped paint on the boards and accidentally got it all over myself. An hour into my paint-the-porch project the dogs started barking, so I put the paintbrush into a plastic cup filled with water to soak and put the lid back on the paint can and then with the help of the bench by the window—I was able to stand up.


Tone came driving up in Kermit and happily hollered, "Nance, Lisa and Mark are here!" Then I saw Lisa's black SUV down by the entrance—slowly heading toward our trailer. T. and I couldn't wait to see Lisa and to finally meet her mystery man—Mark From Mississippi. The minute I saw Mark I was impressed with him and instantly liked him and Lisa was literally glowing with happiness. We're talkin' true love for these two.


After howdys, handshakes and hugs we went into Outer Space and had a really fun visit with them. I couldn't quit smiling as Lisa and Mark took turns bragging on each other's accomplishments. They were definitely long lost lovers who have finally found each other. I love it.


When I asked them what signs they were Mark told me that he was a Virgo and Lisa is a Leo. "Wow!" I exclaimed, with excitement. "That is a great combination! Leo is Fire - Positive - Masculine - Fixed. And Mark, you're Earth - Negative - Feminine - Mutable. I am so happy for y'all!" Mark and Lisa smiled.


A few minutes later T. suggested that he take Lisa and Mark to feed and water the cows and I call Kinky to see if it was okay for us to come over. I went inside the trailer and called Kinky and then I came back outside and said, "Kinky said for us to come on over." Before they took off in Kermit we decided to meet over at the Lodge in twenty minutes.


Fifteen minutes later I was in Kinky's kitchen sampling some nuts that a friend had given to him, while he talked on his phone in his office. When he returned to the kitchen, while he was pouring himself some Kona coffee I said, "Kinky, I love these nuts and can't quit eating them. The chocolate covered pecans, the white chocolate covered pecans and the cinnamon and sugar coated pecans are the best."


As we munched on the delicious pecans we heard Kermit coming our way. Two minutes later Kinky gave Lisa a hug in the kitchen and then she introduced Mark to Kinky. After shaking hands with Mark we visited for few minutes and then Kinky challenged Tony to a game of pool.


While the Hummingbird Man and the Medina Bulldog took turns missing their balls on the pool table, Lisa, Mark and I were in the kitchen drinking some of Kinky's coffee. "Y'all have got to try these nuts that a friend of Kinky's gave to him. The chocolate covered, white chocolate covered and cinnamon and sugar coated pecans are my favorites. Here, y'all have got to try them. It says here that they are made by the Southern Select Nut Company in Wharton, Texas," I said, as Mark and Lisa sampled them. Nodding their heads in agreement. "I am going to their web site when I get home and order some of these for T. and me." Then we went into the big room to watch the pool tournament.


Three minutes later the game was over. Hummingbird Man - 0, Medina Bulldog - 1. "Okay, Mark. You get to play Tony, but you have to have a nickname first," I said. Mark smiled at me and then he started racking up the balls. Then I jokingly said, "How about 'The Mark of Zorro' if you win, or 'The Mark of Zero' if you lose?" Lisa and Mark laughed.


Mark was a good pool player, but T. got lucky at the end. Medina Bulldog - 1, The Mark of Zero - 0. After the game was over Tone puffed up a little from beating Kink and Mark and then we went outside to the Friedman Family Bone Orchard, so Kinky could show them the Blue Plumbago that he had recently planted on Mr. Magoo's grave. "Over there is Sam's grave," Kinky said, as he pointed towards it. "Lady, my cat, is buried there. Sam is buried there, Fly is over here and that's Gooie's grave." Then we started talking about the beautiful plants in the Bone Orchard.


Before leaving the Lodge—I shot Lisa, Mark and Kinky. 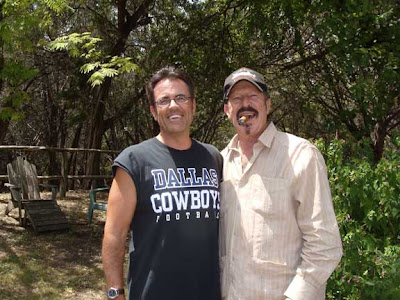 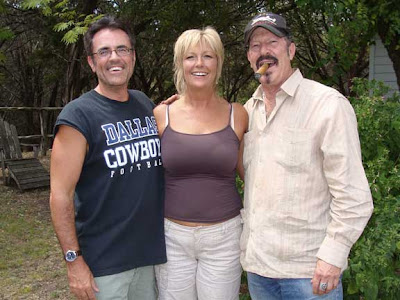 When we arrived back at the rescue ranch we invited the Lovebirds to have lunch with us and they accepted. Our meal was filled with fun stories and laughter and the food wasn't bad at all.
Y'all have a great evening!
Posted by cousin nancy at 8:17 PM