Yesterday we had a nice surprise. Matt came out with his parents, Paul & Gail and his sister Emily. I had a fun visit with Paul and Gail as we walked around the rescue ranch while Matt introduced Emily to all of our dogs. After that we went over to the Lodge to visit with Kinky.

As Kinky, Paul and Matt discussed politics, I told Gail and Emily about the grave robbing squirrel that had stolen one of Mr. Magoo's stuffed toys the other day. As we gazed up into the tree trying to locate the hidden, blue stuffed toy Gail said, "I see it!" After she pointed at it—I finally saw it—nestled high up on an oak wilt covered branch. Unfortunately, I did not have my camera with me, but I promise to take a picture of it the next time I visit the Lodge.

Last night I didn't write a blog because we went out to eat with Paul, Gail, Emily, Matt and Lisa and Tony and I had a wonderful time until it was time for us to leave. As T. unlocked Buttermilk's door I thought he said the most unusual thing, "I hope Buttermilk starts."

"Tony, don't say things like that," I said, wondering why he would project something like that. "Of course, Buttermilk will start," I said, not knowing that I had just told a lie. Tony turned the ignition switch and nothing happened.

After a couple of more tries Tone said, "Buttermilk is dead, again."

Trying to stay positive, I corrected him and said, "No, she's not dead. She's just having another near death experience." Then we jumped out of Buttermilk to go find our friends for help. When I told Lisa about needing some jumper cables she took off to round some up. Then we found Paul and his family and asked them if they could help us.

Five minutes later, Paul's Aggie-colored, maroon Suburban brought Buttermilk back to life and we were thrilled. After we thanked everyone for helping us we drove straight home.

This morning when I got up T. told me that Buttermilk had died, again. As you know, I hate it when things die, but I was starting to get a little tired of Buttermilk's many so-called-passings this past week, so I picked up the phone and punched in Walmart's number. "Is y'all's Automotive Repair department opened today? We need to buy a battery and get it installed." After the woman told me it was open I called the Wolfmuellers at home. "Hi, Jon, this is Nancy."

After I told Jon about Buttermilk and her trouble staying alive, I said, "We're fixin' to leave for Walmart to get a new battery and I was wondering if y'all were going to be around just in case we need for y'all to rescue us, again." After Jon told me that they were staying home today and would be glad to rescue us—we took off for Kerrville.

"Yes, we can install a new battery, but you need to know that it will probably take a couple of hours," the Walmart mechanic told us outside in the parking lot. Tony told him that it was not a problem and then we went inside to buy a Buttermilk battery.

While we stood in line waiting for our turn I suggested that T. call Sandy and Jon and invite them to have lunch with us since we owed them a dinner for rescuing us last week. T. borrowed my cell phone and went over by the bicycles and called them while I kept our place in line.

As I waited I saw a beautiful bicycle that Tony was standing by and it got me to thinking. "Jon and Sandy have already eaten lunch, Nance. They invited us over to their house and Jon is on his way here to pick us up. They are so nice."

"I know. I love Sandy and Jon. We really do need to take them out to dinner for all of their help. I want to go check out a bicycle and will be right back," I said, before taking off.

Five minutes later Jon showed up in Sandy's cool Toyota and we took off for their house which was just a few blocks away. "Y'all are welcome to borrow one of our cars if you want to go eat," Jon said. By the time we pulled into their driveway we had decided to take them up on their kind and generous offer and borrowed their car, so we could go get something to eat nearby, because Tony was starving to death, again.

We went to a restaurant six blocks away from their home. During lunch I did most of the talking like I always do. "You know why all of this is happening, Tony?" He shook his head no as he tossed some tossed salad, smothered in Ranch dressing, into his mouth. "Mercury is in retrograde and it is full moon time. It's like a double whammy and..."

On our way back to Wolfmuelllers we decided to swing by the Walmart parking lot to see if Buttermilk was still parked outside or was inside the garage. When we saw her inside the garage I said, "Tony, it is not going to take long now. Let's stop, because I want to go buy a bicycle."

Twenty minutes later, after paying for the newly installed battery, Tony and I left Walmart—pushing our new bikes! Tony bought my bike for my upcoming birthday in October and I bought his for his Christmas present. After loading them into the back of Buttermilk, I followed him a couple of blocks to Sandy's and Jon's house.

When we pulled into their driveway they came outside to greet us. "We bought bikes! Come and look at them. I love mine," I said. They started laughing as they followed us to Buttermilk.

"In case Buttermilk drops dead, again," I said. "We will have wheels to get us home. Isn't my bike beautiful! I love her, but I haven't named her, yet." As the Wolfmuellers inspected our bicycles they agreed with me that mine was way too cute. "I love the painted on flowers, the green wheels, the front bar leather bag, cup holder and and the wooden back seat and I bought a horn and a speedometer for her," I bragged, as I honked the horn and showed them the digital odometer / speedometer. "Tony's a 26 inch mountain bike and mine is 24 inches."

"I have to ride a 24 inch bike, too, since I am short like you," Sandy said, as she admired my pretty, pastel colored, yellow—bike with no name.

"I wish they had had one in pink, but they didn't," I said. "My bike is simple with foot brakes. It's like the kind we had when we were kids, but Tony's has hand brakes and is an eighteen speed, which is way too complicated for me."

Since it was hotter than hot outside, we went into their house and had a fun visit filled with laughter. We talked about not wearing those goofy-looking helmets when we rode our bikes as kids, the latest iPhone apps, eBay, their cats, Tony & Nancy, that they adopted from us over twelve years ago, squirrels, bird seed and what kind of blinds that I should get for the Space Ship.

When we got back to the ranch Tony took my bike inside the trailer and installed the horn and the mile-marker for me and we plan to take them for a spin this evening after it cools off and I can't wait. Hopefully, I will have a name for her by tomorrow. 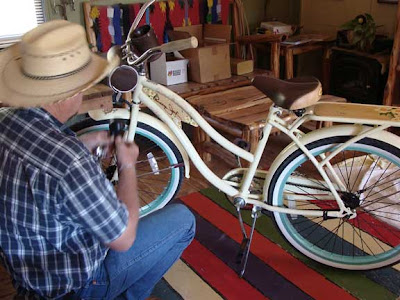 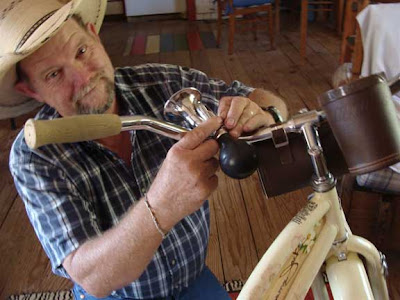 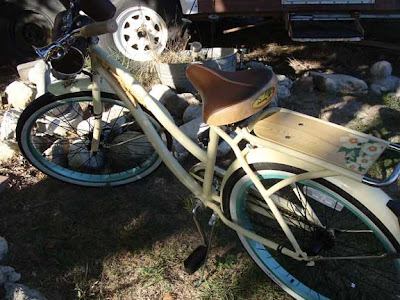 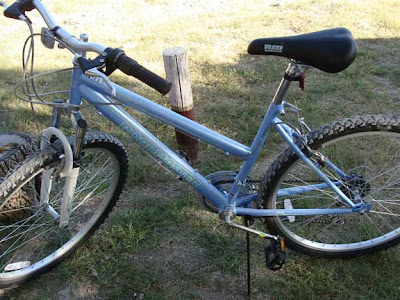 Before I end tonight's post I want to do a BIG shout out to our great friends. Thank you, Paul & Gail, Emily, Matt, Lisa and Sandy & Jon! Y'all are so special to us and we are so lucky to have you as our friends. I love y'all!

Y'all have a great evening!
Posted by cousin nancy at 7:20 PM

Carrying on the Roy Rogers theme ... you should name your bike Nelliebelle after Roy and Dale's jeep! My sister, Dean, named her first bike that in 1962~
Eileen (I'm not sure of the spelling!)

Nancy, What a beautiful bike! Love the tires...

Best to everyone at the ranch.

Hi Eileen and Nancy! Eileen, the first name that came to mind was Nellybelle, but since our trailer is named Nellybelle I wasn't sure if I should have two Nelly's, but since you made this comment—her name is officially Nellybelle and I love it! Thank you for suggesting it.

Nancy, I am glad that you think Nellybelle is beautiful. I love her. Hugs to you and Theodora!