We Saw A Grave Robber In Action!

This morning I got up really early so I could feed the dogs, start a load of laundry in Queen Bee and vacuumed the trailer before calling Harley Belew at seven forty-five to do The Harley Show on the Rose 99.9.

The Utopia Animal Rescue Ranch segment was fun and Harley had me laughing from the git-go. Harley's Pet Of The Week today was  Lois Lane, the beautiful, sweet two year old Pit mix. "Harley, she is one great dog and some one needs to come out here and adopt her. I love this dog..." 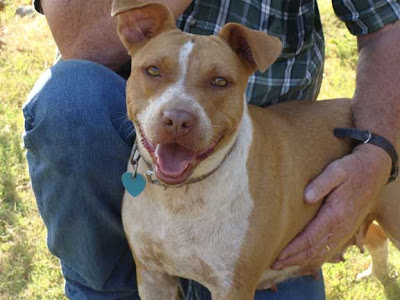 After breakfast I walked eight miles with Leslie Sansone, while Tony did his chores outside. I am a few miles behind schedule, so I plan to walk eight miles a day for the next four days to get caught up and be ahead of schedule.

Around one-thirty while Tone was in Kerrtown to get Van Morrison, our white 1998 Ford Club Wagon van inspected at Balsers, a nice, young couple showed up to take a tour of our rescue ranch. After I introduced myself and met Margot and Kevin from Koyote Ranch, Kevin said, "I like your pink overalls."

"Thank you, Kevin. I do too," I said. (Today, after a couple of weird dreams from last night, I decided it would be a totally pink day for me, so I wore my baby pink T-shirt that matched my Pepto Bismol colored overalls with my pink Justin Gypsy boots and my pink cap that says Cousin Nancy on it—the one that Tone had made for me a while back.) "Let me give y'all a tour of our rescue ranch."

After the tour we went into Outer Space and I had a fun visit with these two nice people and then T. showed up. As Tony visited with Margot and Kevin I came inside and called Kink to see if I could bring them over, because I wanted him to meet them. "Sure," Kinky said. "Give me ten minutes, Nance."

Nine minutes later Kinky was outside shaking hands with Margot and Kevin and then he invited us inside the Lodge for a fun visit. Before leaving the Lodge, Kinky gave them a tour of the Lodge and a couple of autographed books and then we left.

Early this evening I went over to the Lodge to visit with Marcie. Right as we were walking out of the Annex the weirdest thing happened. "OMG, Nance," Marcie said. "Look!" I looked in the direction that Marcie was pointing.

"Gosh, I wish I had my camera with me right now," I sighed. "I can't believe this! This is unbelievable." We stared in silence as we watched an obese squirrel jump into a tree about twenty-five feet away from us—carrying in his mouth one of Mr. Magoo's old, blue stuffed toys that Kinky had placed on top of Gooie's grave. And, the fake-furred toy dog was much larger than the squirrel thief.

When we stepped outside the Annex the squirrel quickly ran up the tree with his stolen toy in mouth, so Marcie and I walked over to the tree and watched the grave-robbing-squirrel climb higher and higher up into the tree until we could no longer see it.

Marcie and I then went over to Mr. Magoo's grave and checked it out. "Look, Nance, he took it from there," Marcie said, as she pointed her finger to the empty space where the blue stuffed toy had been minutes ago. "Do you think the squirrel thinks the Eternal Squirrel is real?"

"I doubt it, Marce. It doesn't look real enough and besides it lights up every night..."

After Buttermilk crossed the river to take me home, T. drove up in Kermit. "I'm fixin' to go take some pictures, Nance."

"Tone, you are not going to believe what has just happened! Marcie and I just watched a giant squirrel take one of Gooie's stuffed toys and climb up in a tree with it. The toy was bigger than the squirrel! I'm sick that I didn't have my camera with me." T. smiled.

"I'm sure it had to be a mama squirrel that stole it for her nest that she is building..."

Y'all have a great evening!
Posted by cousin nancy at 8:11 PM

Sure wish you could get some pictures of the grave robber.....maybe you could "bait" the thief with another stuffed squirrel?