Today has been fun. Last night when I went to work the first thing that Darlene and Sarah said to me was, "Nancy, do you have pajamas?"

"Yes," I answered as I tied the apron around my muffin top. "Why?"

The women started laughing and then they told me that they wanted to play a joke on Wolfgang, our boss. "Since we have all been working extra hours for weeks we thought it would be funny to come to work in the morning wearing our pjs....We'll tell Wolfgang that we were just too tired to put on clothes...." And last night during dinner we told a few of the guests what we were up to and they thought it was hilarious.

In fact, Dana suggested that we tell Wolfgang and his wife that we wear our pajamas to work everyday.

So this morning after showering I put on my pajamas and went next door.

As I drove Trigger past Sarah's and Darlene's house I saw Sarah and Tracy sitting out on the porch smoking, so I stopped and got out of the truck, to make sure they were still going to wear their pajamas to work. Because I did not want to show up first in my pajamas and be the only one wearing pj's.

Ten minutes later all of us drove down and parked our vehicles at the Escondida hacienda and we were all wearing our pajamas. And Darlene, went the whole nine yards, because she had even rolled up her hair in curlers.

As the four of us strolled into the courtyard, Wolfgang and his son were sitting outside on a bench and when they saw us—they burst out laughing and then they followed us into the kitchen, to drink coffee with us while Darlene and I got things ready for breakfast.

Before the Escondida guests started arriving for breakfast at 8:30, I was visiting and drinking coffee with Wolfgang, and I joked, "I almost came to work this morning—not wearing my dentures. But that might have been too much for your guests." And he burst out laughing. Then he suggested that Tony come take pictures of us—in our pajamas. So we lined up and Tony shot us. 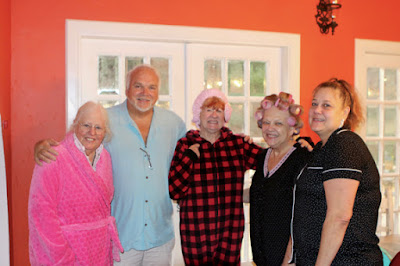 Y'all have a great evening!
Posted by cousin nancy at 5:46 PM

Cute!! Why am I not surprised that your P.J.'s are pink.

Hi wolf! It would be shocking if my robe and pajamas were not pink. Thank you for your comment.