Yesterday before Tony and I went to Kerrville to run errands I went outside, on the porch, to bring Henry Standing Bear inside and he made me laugh out loud. 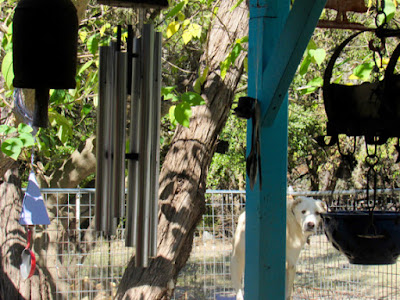 So I skipped back inside the house and grabbed my camera, in hopes that Henry would stay put. Then I went back outside and took this picture of Henry Standing (on top of the table) Bear. 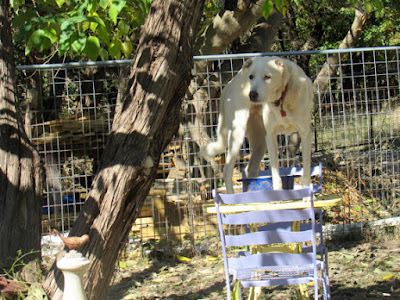 On our way to Kerrville Tony and I were talking about the cold front that was due to blow in within the hour.

When we left Big Foot Ranch it was 71 degrees outside and twenty minutes later when we arrived in Kerrville it was 50 degrees and it was very windy. So to say the least—we ran our errands in record time, so we could get back home and start a fire in our wood burning stove.

Last night as the temperature outside dropped steadily, I relaxed and watched the movie The Art of Racing In The Rain. Omg, it was incredibly great and the story line stayed close to Garth Stein's best selling book. So I highly recommend this great movie to everyone.

Before I went to bed the temperature outside was already 30 degrees and it was starting to sleet, so I put another log on the fire and started the faucets slow dripping.

Henry woke me up around 4:30 in the morning, because he needed to go outside and I am glad that he did.

It was 27 degrees outside and 63 degrees inside, so I added a couple of logs to the fire and then checked the sinks to make sure they were still dripping.

Because I was wide awake by now I decided to go ahead and stay up, but Henry went back to bed. I made myself a cup of coffee. And because The Cabin was so quiet in the wee hours of the morning I decided to write until Tony got up. I quit writing at 5:30.

As I finish writing this it is only 30 degrees outside and The Cabin's temperature is a cozy 76 degrees. I just checked the rain gauge, because of all of the sleet and it hardly registered any precipitation.

Then I looked outside at the barn and saw that icicles had formed on the roof's edge, so I took this picture. 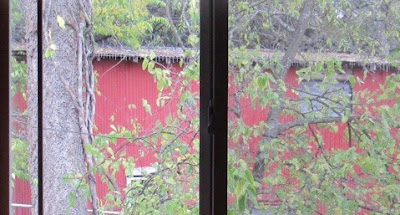 Y'all have a great (day) evening and keep on laughing!
Posted by cousin nancy at 10:28 AM

You didn't get any snow?

There's still plenty of it here everywhere there is shade! Lots of ice, too.

Prettiest things are the chains from the gutters. Even thought they were/are frozen solid, water was trickling through them and just sparkling in the sun.

Beautiful under all the cedars - sparkling on the snow and ice too. You'd think we were up north!

Hi Mari! I wish we had gotten some snow. I love it that you got some. I hope you took some pictures, because I would love to see them.

When we left for Albuquerque I found my misplaced camera and vowed to charge the battery when we got back from Albuquerque. I just put it right back where I found it. It is still there. Sigh.

MIR continues its devastation and the NoMads will bear witness to that. Judy's garage door opener now only works from inside the garage. Her hot water heater quit heating and while thought to be the heating element, it turned out to be the breaker. Lori's cell phone was not finding the 'spots' to get internet while on our trip to Albuquerque, so she had to take it to a tech to get it fixed. My flip cell phone battery finally stopped holding a charge and the charger had to be hand held to stay in the phone as it was, so I had to pull out one of my new (old, but bought new) flip phones to replace it. And probably unrelated but at the same the U.S. Census Bureau is all but threatening to throw me in jail for not doing their online "community" survey (they say it will take 40 minutes!). I'm not even IN a 'community' out here! I can't wait for MIR to end on the 20th!

That's so funny, his sister Miss Moneypenny does this too! He's such a sweet boy. Have a great day, Nance!
Tail wags,
Fay

Hi Mari and Fay! Thank y'all for commenting.

Mari—I can't stand MIR too. Sorry to hear about your and The NoMads trouble, because of MIR time. But don't feel y'all are the only ones affected by Mercury In Retrograde, because our electric gate quit working. It is driving me crazy, but it should be fixed sooner than later. Hang in there.

Fay—That is hilarious about Henry's sister, Miss Moneypenny doing the same thing as Henry—standing on top of tables. Thank you for letting me know.

P.S. I got your pictures of your table-toppers and I love them and they made me laugh. I will post them tomorrow on my blog.