Yesterday morning after working next door I had to run a few errands in Kerrville. My first stop was at the big H-E-B to stock up on groceries. I guess because everyone was doing some last minute shopping for turkey day on Thursday—it took me over ten minutes to find a parking space and park Trigger.

The grocery store was filled with so many people I speed-shopped while dodging people visiting, kids running wild, people not moving and just starring at their phones (looking like zombies) as I waited patiently for them to move so I could get what I needed off of the shelves, etc.

Basically, because of the upcoming holiday I put people into three categories. They were either mad or joyous or bewildered and I was determined to be joyous and I think I pulled it off.

My next/last stop was at a department store in the mall so I could purchase some New Balance walking shoes, because my old pair finally fell apart. In fact, earlier that morning at work my old shoes came apart where the rubber meets the leather, so when I walked—my shoes more or less echoed my footsteps—flopping after each step that I took. Thankfully, no one noticed at work.

After purchasing my new shoes I went and bought a new pair of 501 Levis. My older jeans didn't come apart at the seams or echo (except when I accidentally farted) I just needed a new pair. And I was pleased with my discount of $19.51.

Right after I returned home I put away the groceries and unpacked my new shoes and put them on for a test drive.

I was a happy camper until I pulled my Levis out of the sack and saw this wire-thing looped between the belt loops—it was a shoplifter alarm and it was sort of cute. And because I needed to go back to work soon I knew that I did not have enough time to return the jeans to the store, so they could remove the alarm, so I got creative. 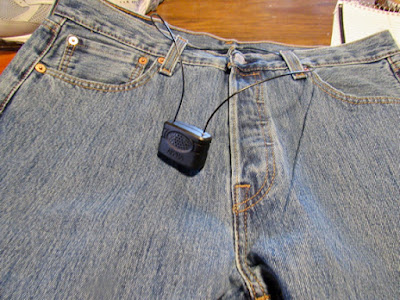 So I tugged with all of my might on the wires, but that did nothing, so I grabbed my big scissors and tried to cut the wire, but that didn't happen, so I grabbed a pair of pliers and that finally worked! I was thrilled that my jeans were no longer being held hostage and I wouldn't have to wear them to work with an alarm system dangling between my legs. 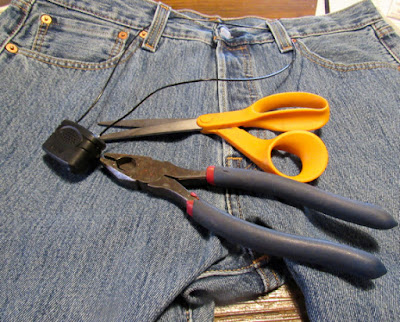 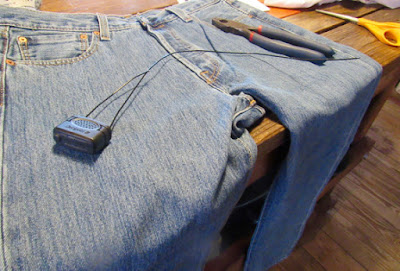 Because Tony wasn't home to help me with my dilemma I was thrilled with myself that I had successfully removed the tiny alarm with wires, without needing his assistance. But my joy did not last long, because the alarm started emitting this continuous loud, annoying shoplifter beep. "BEEP, BEEP, BEEP...."

When it first beeped it upset Henry Standing Bear so much he ran to the front door, pushed the screen door open and ran outside and began barking non-stop. But the worse part was having to listen to Little Debbie howling—non-stop. So let's just say that my smile instantly morphed into a frown and that I said a few cuss words.

With Henry barking outside, the alarm beeping and Little Debbie trying to imitate a miniature wolf or small coyote I knew what I had to do and I did it quickly. I grabbed the hammer and started banging it on the alarm box—but my hammering did no good. This tiny alarm system was made of molded plastic, but it was as tough as solid steel. 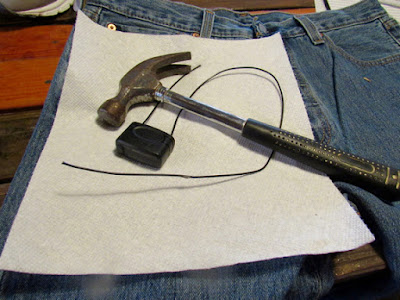 So I put the hammer down and threw the tiny alarm into the dishwater. 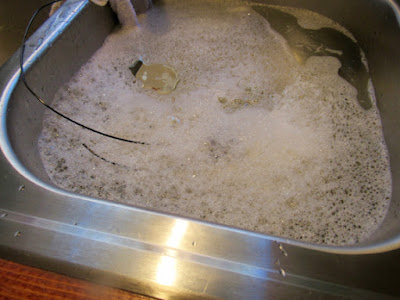 It beeped twice and then it stopped or better said—it had drowned. And it was a floater. Then there was total silence. No beeping, no barking and no petite howling imitations.

So, I let Henry back inside the house and let Little Debbie go outside and then I waited for about two more minutes before removing the floating alarm, because I wanted to make sure the alarm was truly dead and would not go off again. And the good news is—when I pulled it out of the water—it did nothing at all. 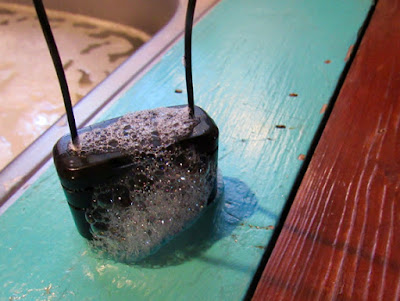 Then I dried it off, because I felt it was the least I could do, before tossing it into the trash can.

Y'all have a great evening and keep on laughing!
Posted by cousin nancy at 6:49 PM

This is hilarious! Good thing it didn't have ink or dye in it...!

Hi Unknown! Omg, I never even thought of that. Now I have another thing to be thankful for.

BRILLIANT to think of drowning it! I would have buried it and heaped all sorts of things above it until neither the dogs nor I could hear it!

I can't remember when I've laughed so much at one of your posts, though. Life with you is never dull, that's for sure!

Hi Mari! Thanks for your comment. I am looking forward to walking with you again in the park.