Remember! or Remember The Alamo!

Today has been great and so was last night. Yesterday evening right after I posted on my blog, our phone rang. And this is what I heard, before I could answer the phone, "Hello Cousin Nancy! This is Sasquatch. What are Tony and—" It was our dear friend Fourth. And thirty minutes later, Fourth arrived at Big Foot Ranch to spend Happy Hour with us.

Omg, Tony and I had so much fun, sitting around the kitchen island, with Fourth catching up with each others latest news. And after we had caught up with each others news we talked and laughed about everything under the sun, including some of our old favorite movies.

At one point Fourth said, "One of my all time favorite movies is? Dang it. I can't remember the name of the movie. It starred Jeff Goldblum and—"

"The Big Chill!" I said. "It is one of my favorites, too. The music was so awesome and I loved the guy who drove the Porsche and he was a drug dealer, but I can't remember his name." And Fourth also couldn't remember the actor's name. Then we started talking about something else, but now I can't remember that.

Then we decided to move our happy hour outside and sit out on the front porch and I was thrilled, because it would be the first time for us to have company in the evening and show-off our new string of solar lights that constantly changes colors (from red to green to yellow to blue and orange) or soft white.

As I was turning on the lights to show Fourth our new solar lights, I first set it to the soft white glow position, but it was so boring, because there wasn't that many lights on the string, so I then switched it to the changing colors mode and joined them at the table.

As we watched each individual light change a different color from the other lights, we talked about that old movie The Alamo, starring John Wayne and Richard Widmark. We all loved that great movie and Fourth had us laughing about some hilarious, behind the scenes things that happened on and off the set, that he and his family had witnessed when it was filmed in his hometown—Brackettville.

I could tell you some of Fourth's hilarious Alamo stories about John Wayne and the cast, but those are Fourth's great stories, which I hope one day soon he will write about and share for the world to enjoy.

Bottom    Line: We had so much fun spending the evening with Fourth and we were sad when it was time for him to leave. And my back is still aching from laughing so much at his awesome stories.

Now I must admit that earlier this evening, after I put a giant log on the fire, The Cabin was so cozy and warm I almost decided to not write a post for tonight, because I wanted to just sit around and enjoy the comforts of home. Here's a picture of my blazing fire. 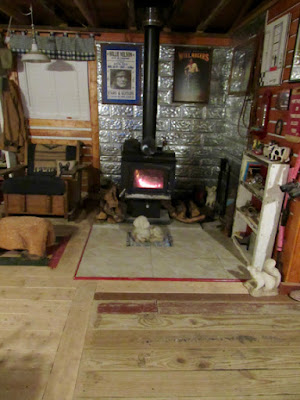 But after I saw Henry Standing Bear sleeping and enjoying the comfort of my chair—I decided to go ahead and write in hopes that at some point Henry would wake up and go nap on the bed. But so far that hasn't happened, yet. 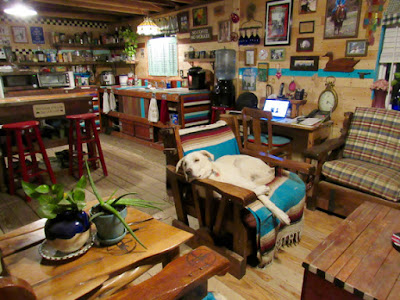 But, before I sat down to write this, I grabbed my camera and went outside, to take pictures of our 12 foot long string of solar changing lights, so I could show them to y'all. But the weirdest thing happened.

When I turned them on to change colors they started out all one color and they would all change to the next color almost at the same time instead of out of sync like they did last night. So I went ahead and took these two pictures anyway for you. And please note that the blue lights are my favorite color of all. 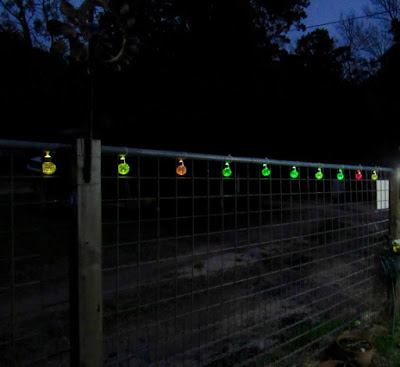 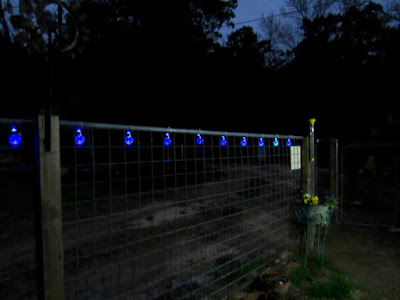 And I must laugh about that old saying, "You get what you pay for" because our puny, 12 foot-long, solar light string only has ten bulbs and they really don't put out that much light.

As I finish writing this tonight, with Henry still sleeping in my chair and snoring loudly—I Googled The Alamo after Fourth went home last night. And I sent him this e-mail:

".... That drug dealer actor, in The Big Chill was William Hurt. He's a Pisces. And Kevin Costner played Alex, the dead guy in the casket. And Costner is a Capricorn..."

Y'all have a great evening and keep on laughing! (And Remember The Alamo!)
Posted by cousin nancy at 7:52 PM