Today has been great. Tony and I worked this morning and when we got back home we took off for Kerrville to run a few errands.

Our first stop was at the laundromat to wash two loads of clothes and while the washing machines washed—we went the next block over and picked up some groceries. And I made sure that we bought a bag of  birdseed with corn, so I could feed the ducks.

After we put our laundry into dryers Tony and I went down to the park, so he could take pictures, while I strolled from the Sydney Baker Street Bridge to the Lemos Street Bridge and back. And this time I remembered to take along my little Canon camera and a quart-sized Baggie that we had just filled almost to the top, with the birdseed mixed with corn.

I wasn't even out of sight of Tony when I stopped and took this pictures of the beautiful ducks, swimming around, in the Guadalupe River. 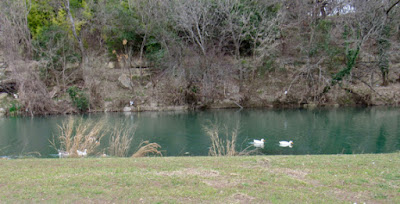 Then I headed down to the river bank, so I could feed the ducks and there was this precious, seven-eight-year-old, little, tubby girl, with her parents, who was running up and down the river bank trying to lure the ducks to come to her and these ducks were completely ignoring her.

So, I reached into my Baggie and flung a handful of duck food, near the water, and that did the trick. All of these rude ducks immediately high-tailed it to the food and they began to eat.

The little girl screamed with delight, as she hid behind her parent's legs for duck protection. So, I threw the ducks another handful of food and watched the little girl start slowly approaching the ducks with caution. I guess because someone had told her that you can't trust ducks.

So, with her parents standing nearby and watching us, I said to the pleasantly plump child, "Will you please help me feed these ducks?" Her parents smiled and waved to me as their cute daughter came up to me. "Now, reach into the bag and grab a handful of food," I said. "Then toss the ducks some food."

The child reached into the Baggie and flung the duck food and then she screamed with delight, as the ducks race-waddled to get to the food first.

The little girl was so thrilled with the ducks' reaction, she looked over to her parents to see if they were watching and they were smiling and clapping their hands at her brave "Feed The Ducks" performance.

"That was fantastic!" I said. "The ducks love you! So why don't you feed them some more?" And that was the end of me feeding the ducks, because this adorable little girl grabbed my Baggie and fed the rest of the birdseed and corn to the ducks. And here is a picture of the ducks eating. And a picture of my boot and the ducks, to show you just how close these ducks got to us. 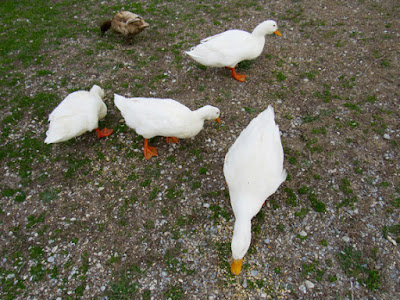 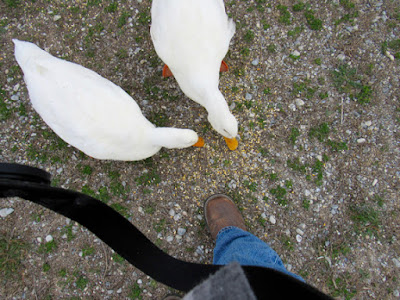 After I thanked the little girl for helping me and had waved to her parents, I took off walking again, but I didn't go very far again, because this time I saw a man walking a Great Pyrenees. So, I stopped in my tracks and took this picture. 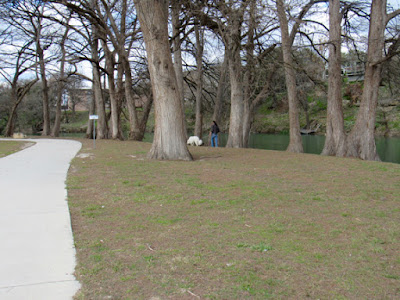 Then I started race-walking in hopes to catch up with the man and his beautiful dog and I almost got run over by a kid, speeding past me on a skateboard. But it was worth risking my life, because I did catch up to the Pyr and the nice, good-looking, thirty-something man and I had a fun conversation with him about his female Great Pyrenees. And he let me pet her! 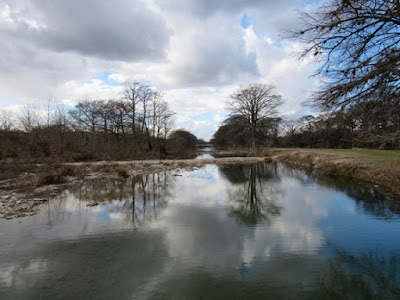 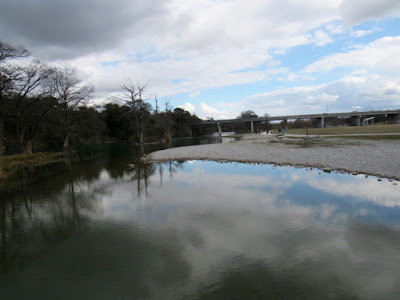 When I met up with Tony, he asked, "What took you so long? Did you get lost?"

And I just laughed, and said, in my best Donald Duck voice, "No. I just had a great time. Let's get quacking!"

Y'all have a great evening and keep on laughing!
Posted by cousin nancy at 8:13 PM

Oh I am so jealous of your walk! I can't wait to get back there!

And I now understand why all those ducks are so FAT! People love feeding them!

I'm not so sure, though, that they'll trust Henry Standing Bear so I'm glad you got at least one photo featuring your shoe in the same frame as the ducks!

My turn to make you jealous: I attended the great New Buddy Holly Band concert at the Cailloux Theatre tonight and it was a total blast! I wish ya'll could've been there! I didn't get any exercise walking at the park, but I got plenty clapping and moving to all those songs of the 50s and 60s!

Hope to see you later this week so we can walk and talk!

Hi Mari! I am still on the fence about maybe bringing Henry Standing Bear with me, because I definitely want to stop and feed the ducks again.

Okay, now I am jealous about you going to the New Buddy Holly Band concert. Tony and I saw them many years ago, performing in the park and they were incredibly talented. Every one within earshot of this great band was either dancing, smiling, swaying, singing, etc. We had a blast listening to their awesome music.

I hope we get to walk again this week!