Last night, I watched a few episodes of Rake, on Netflix then I went to bed early.

This morning before looking in the mirror I did my habit—"Today is going to be great!" Then I loudly clapped my hands together and then our dogs jumped off the bed and began barking, before I could even jump off of the bed.

Then while my coffee was brewing, I went into the bathroom to see if I had gotten any much-needed beauty sleep. And let's just say that I was disappointed.

So tonight I plan to stay up late and binge-watch Rake, because mirrors don't lie and I'm living proof that getting beauty sleep only counts when you're under the age of thirty years.

As I was sipping my coffee I was pondering—Ah, to be thirty again—no thank you—been there done that and somehow I survived. And thank goodness there was no social media back then, because, I for one did some pretty dumb stuff. And I say thank goodness for being in my late sixties, because all of the dumb stuff that I did back then—I no longer can remember and there is no proof of it floating around on the Internet.

Anyway, today has been great as I had predicted it would be, first thing this morning. Seriously, I highly recommend doing this habit—because it really works.

For the most part of today I kept thinking about that Egyptian Goose and I don't know why. And after I had told Tony, a few times, about that goose keep popping into my head, I decided to name that Egyptian Goose—King Tut, because it only has two syllables instead of three and it also makes me smile.

Because when I think of King Tut I instantly think of Steve Martin's hilarious, hit song—not the mummy who died at the ripe old age of nineteen.

Late this afternoon at 3:59, the temperature outside was steadily dropping and it was already down to 51.4 degrees outside and 69.6 degrees inside The Cabin. So I took this picture of our Atomic Clock, full of important information, with Henry Standing Bear posing for me, on top of his window seat. 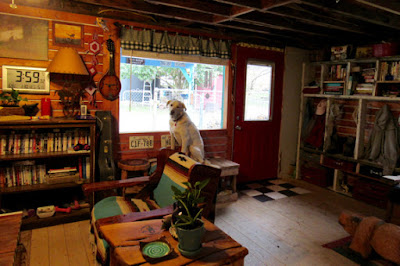 Then I ventured outside and helped Tony bring in some more firewood for the night, before it got any colder outside. And after that I cleaned the ashes out of the wood burning stove and then I started a cozy fire, before The Cabin's indoor temperature dropped below 69.6 degrees. Then I stood back and took this picture. 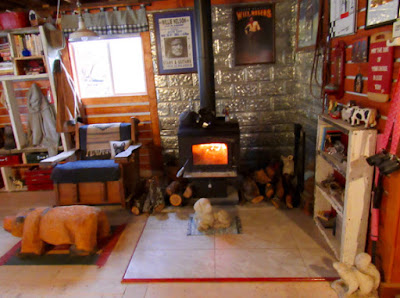 And as I finish writing this post tonight, I am hoping that Mari and I will get to go walking in the park tomorrow afternoon, so she & Tex or she & Si can meet King Tut, too.

P.S. After posting this picture last night of "the wagon train" following me I've titled it The Cagoose—Bringing Up The Rear! 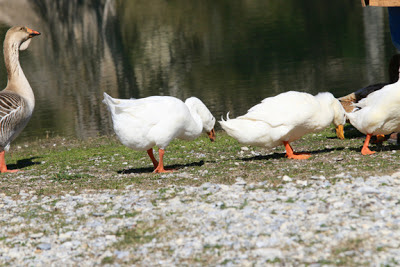 P.S.S. Mari just sent me this hilarious "Snow Day" cancellation video and I loved it and I am still laughing! Snow Day
Posted by cousin nancy at 5:25 PM

Hi Karlee3! We would love for you to come by for a visit.