Yesterday came this-close to being great. Thursday morning after I exercised, cooked Tony and Aaron breakfast and then cleaned up the kitchen—I started working (painting) on the rugs, in hopes to finish them once and for  all.

Around 5:00, I had finished them except for putting the final coat of Min-Wax, to protect them from getting scuffed or eaten by Henry Standing Bear.

Getting up and down, all day, my knees were sore and so was my back, because I had to use a chair or counter top to help me get back up. And the only good to thing to come of that was I was rebuilding muscles, in my arms, from using them to either help lift me up or lower me down to the floor.

Anyway, at 5:00, I carefully lowered myself to the floor and then I hand-painted the kitchen rug Min-Wax and I was thrilled, so I took this picture as soon as I was standing. 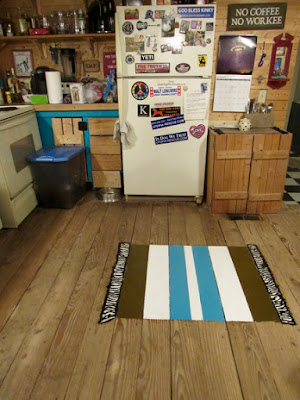 Because my knees and back were aching, I decided to use an extended roller-brush to put the final coat on the big room's rug. Which was a bad mistake, because when it finally dried—there were air bubbles splotching my so-called "work of art."

So, I immediately read the Min-Wax application directions and discovered that using a roller brush was not recommended at all, because they would cause air bubbles which would then need to be re-sanded, etc. So yes, we're talking a total do-over, but unfortunately not today, because I decided early on this morning, that my knees, back and arm muscles needed to rest. Anyway, here's a picture of my splotched rug. But that's okay, because I've already decided to make some changes in the design. 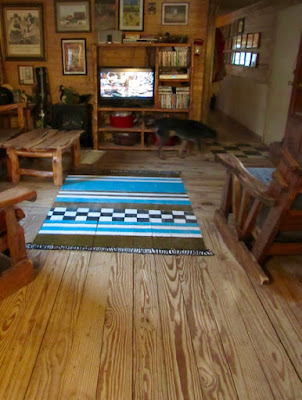 This morning, many of our great volunteers showed up to walk our dogs for us. Kay, Sara, Gigi and her husband, Alex, all wanted to eat lunch together, at the Koyote Grill, so we did.

During our delicious, fun lunch we did a lot of laughing, to no ones surprise. When we were confessing and laughing about some of the things that we've done, in our pasts, I decided that I really needed to make a true confession, too. And it went something like this:

"A year or two ago, a lot of our friends were all getting these emergency food supplies to store, in case something bad happened. And after they had convinced me to do it, too. So one day, I was surfing the TV channels and when one of those home shopping channels showed that it was selling emergency 30-day food supplies for $100.00 that normally would cost twice as much—I immediately bought two for Tony and me.

A few days after our emergency food supplies, I felt guilty, after telling him about it, because I had not forgotten to get him one, too.

Since, the home network channel had sold out, twenty minutes after I had purchased ours, I decided to buy a few orange buckets with lids, at the Home Depot, so I could stock up and have plenty of food for the three of us.

Well, it turned out, over a few weeks, I had purchased a total of nine buckets with lids and filled them all with food that only required to "just add water." I mean we're talking hundreds of boxes of potatoes—like scalloped, mashed, garlic & cheese potatoes, etc. and all kinds of rice, too. And it made me proud, because I knew that the three of us would be able to survive for at least a half of a year or until 2017, because I had made sure to buy these items that had the longest expiration dates on them. And I've stored all of our survival food, in buckets that are stacked all of the way to the ceiling, in our master bathroom's walk-in shower.

So now, all of that emergency food I bought is now expiring in just a few weeks!" After everyone of us had quit laughing. I made jokes like, "So for this years Christmas present, I plan to give all of y'all big sacks filled with boxed potatoes, rice, macaroni & cheese, etc. and canned goods, but they all must be eaten before January 1, 2017."

Then Kay, Sara and Gigi suggested that I save the emergency food and just store it to feed our dogs, in case of a emergency.

So now I have two do-overs to do. First, I must sand and repaint the big room's rug tomorrow to protect my mental health and my second do-over is for Kinky's, Tony's and my future survival. So, as soon, as we can move all of the emergency food packed buckets, to store outside, for out dogs—I think I will just buy a few more of those original 30-day emergency food packed buckets, because their packaged food is guaranteed to last 100 years or longer.

Y'all have a great evening and keep on laughing!
Posted by cousin nancy at 6:35 PM