Round And Round! or 16 Minutes! or Steve!

This past week I've been so busy either working, editing or sleeping it has simply flown by. I am thrilled with how well the editing is going which has been full of rewrites and cutting, etc. But I must admit or brag that this 3rd novella of mine is definitely my best of the three, because it has made me laugh so much my back is aching.

Today has been great. This afternoon after we ate lunch, we loaded up Trigger, our loyal, aging F-150, with laundry and then we took off for Kerrville, so we could do our laundry, at the Country Clean Laundromat, on Water Street. Which is conveniently located only one block away from the big H-E-B grocery store on Main Street.

While our dirty clothes swished back and forth in the washing machines Tony and I took the opportunity to go grab our groceries at H-E-B. And luckily we returned just before the last spin cycle had stopped, so we did not waste any time at all.

After Tony helped me put our wet clothes into two dryers, we sat down on a nearby bench and we watched our clothes go round and round.

Quickly filled with boredom I suggested that we run down to the park to feed the ducks and walk around, but Tony was not keen on my idea, because it was chilly outside.

And sooner than later I was glad that we had stayed put, because this friendly, nice gentleman walked over to us and he introduced himself as the new owner of this and three other laundromats, in Kerrville.

After meeting Carlos, I told this nice man about how much we loved his laundromat, "It is always so clean and the bathrooms are always sparkling. We truly love to do our laundry here..."

Carlos thanked us for our praises and then he asked us if we had a few minutes to talk to him about any possible improvements that he might make, so I jokingly said, "You've got 27 minutes. Start talking." Then we all started laughing, as our clothes tumbled dry in his dryers.

We told Carlos that we thought that there was nothing more he could do to improve his laundromat, because it was perfect as it was. Then he told us about a few ideas that he had for improvements. And when he was finished talking, I teased him, and said, "You've now got 16 minutes left."

Anyway, thanks to Carlos the time flew by quickly. And a few minutes later, after Carlos had adios-ed us, we were busy folding our cleaned clothes. So I want to do a big a shout out—"Country Clean Laundromats Rule in Kerrville! They are absolutely the BEST!"

Before I finish writing this tonight I want to go down memory lane, because yesterday Ronnie, my sweet, big brother called me, "Nance, you've got mail, because I just sent you an old photograph I found of you and Steve playing guitars, at one of my many birthday parties, at City Park in Austin. It was 1971. "I was 21 and you were 20. You're playing my Gibson and Steve was playing your Martin."

Then Ronnie laughed, and said, "Actually it is a picture of you and Steve's arm is in it."

After we adios-ed each other, I immediately checked my e-mail from Ronnie and after I looked at the picture I shot this note back to Ronnie—"Thanks for the photo. I don't think I was frowning in it. I think I was just concentrating real hard on playing the guitar. Anyway, I love this picture of Steve! He was one good-looking boyfriend of mine and one great lead guitarist!" 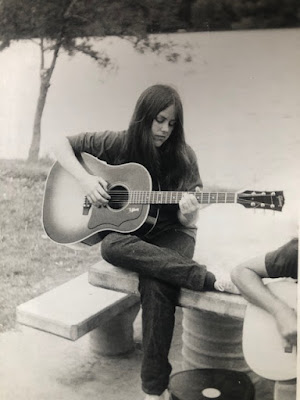 Y'all have a great evening and keep on laughing!
Posted by cousin nancy at 6:52 PM

great picture of you as a young woman. beautiful gal, then & now:)

Hi Anon! Thank you. And don't you think Steve was arm-candy?