The Tooth Fairy! or Food For Thought!

First off, I want to apologize for not writing the last few days. My excuse is I was too busy. But now that things have slowed down, I am ready to write again, even though today has been pretty uneventful.

The last two days have been gray and chilly here. In fact, this morning when I woke up and after I did my habit—I went into the kitchen and it was 52 degrees inside The Cabin and 44 degrees outside.

So later this morning, to say the least, before Tony and I put on our heavy coats and went to Kerrville to do our laundry and run a few errands—I put a huge log in the wood burning stove to try to warm the cabin up for our dogs while we were gone. And I could tell that Little Debbie really appreciated my efforts.

Our first stop was at Country Clean Laundromat and when we got out of Trigger—the gray sky had disappeared and the sun was shining brightly.

While our wet clothes tossed and turned at the laundromat, Tony and I shopped for groceries at the big H-E-B and we were confounded to find that the store was out of the 2% milk that we always buy, because the food-stocker told us it was still on the truck waiting to be unloaded and the same thing was true about the brown rice being temporarily out-of-stock (not there) too.

But I didn't let it dampen my day, because right after Tony groaned about "Where is the rice?" our dear friend Les walked up to greet us. And after howdies, hugs and handshakes we had a fun visit with Les, on isle #9.

And Les, who was wearing a heavy vest and us in our warmest jackets laughed about only thirty minutes ago it was cold outside and now the sun was shining and that we looked like idiots dressing for winter. But we didn't care, because 3/4 of the people shopping were all wrapped up warm, too.

After we adios-ed Les, Tony and I hurried through the grocery store shopping, because we needed to get back to our clean, damp clothes. Bottom  Line: We left the store without milk and the brown rice that I cook daily for our dogs. But not to worry—I still have some brown rice to cook for our dogs hearty breakfast tomorrow and Tony will just have to do without, until tomorrow. 😞

When Tony and I got back home I checked my e-mail. My dear friend Mari had sent me a few, but the one that got me to thinking was this one. Mari's Subject Line was: The Truth In Advertising. And she wrote:

"This should come as no surprise and yet, it's like finding out that the Tooth Fairy isn't real. We won't look at commercials in the same light again...."

Then I watched this video that was attached to Mari's note and talk about a real eye-opener. Omg, I could not believe my eyes about the shocking secrets of food commercials. And I bet that most of y'all didn't know about this either.

Even though they used cardboard, makeup sponges, glue, motor oil, etc. I have to admit it is all pretty clever and food for thought. But like Mari said, "We won't look at commercials in the same light again." And just so you'll know my favorite prop used was for the pink ice cream. And that is about it for tonight.

Update: Our windows and doors are open and the ceiling fan is on, because the wood burning stove is still putting out heat. It is 80.2 degrees inside The Cabin and it is 70.3 degrees out on the front porch! "Tony let's do happy hour outside." 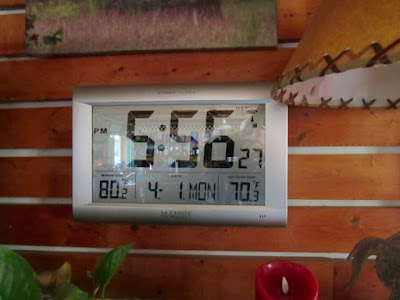 LOL now THAT video made my day. Who knew? WOW. I'm going to have to share this one. Too funny. Have a fun rest of this day. Thank you for sharing this.

Hi Anon! I am glad you liked the video and thank you for your comment.