Today has been great. This morning our good friend Rick, came over and we had a fun visit with him. And thirty minutes later, our dear friend Sarah came to visit us and she ate lunch with us, on the front porch. We had an H-E-B Supreme Pizza. (On sale right now 2 for $5.00.)

After cleaning up the kitchen I decided to take a short nap, because I was feeling a little bit tired. So Henry Standing Bear, Belle, Little Debbie and Big Al(ice) took my one hour nap with me until the alarm clock went off, at 2:55.

I had set it for 2:55, because I didn't want to miss Ellen's show, because I love her show and on today's show Oprah was her guest. I also love Oprah Winfrey, because I admire her for all of her life's accomplishments and her wisdom.

In the first ten minutes of Ellen's show she and Oprah were talking about the movie A Wrinkle In Time starring Oprah and Reese Witherspoon. And I was not disappointed, because while they were talking about the movie, Oprah said, "...Never give negativity power"...and..."Never feed negativity." And I totally loved hearing those wise words, because for me they are words for me to live by.

After watching the show I called Carol, "Oprah was just on Ellen's show and it was fabulous....Can Tony and I come over?"

Three minutes later we were, inside Carol's beautiful house, visiting with her and Bill. And then Carol showed me this really cool spiralizer that Amazon had just delivered to her door. "I love this," I told Carol before she even gave the three of us a demonstration.

And while she was getting the zucchini, beets and a sweet potato I checked out the Mueller SpiralUltra instruction sheet to see if I could figure out how to use one of these gadgets, because I love cooking with vegetable spirals instead of pasta. 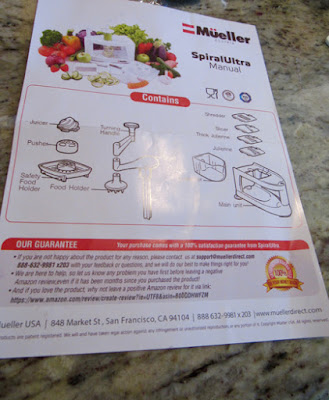 But before I could say, "I'm gonna buy one of these things."

Carol said, "Don't buy one, Nancy! Because I just bought you one, too...." Now that was some exciting news, but I felt guilty about her buying it for me and I felt I had to do something in return to repay her for her kindness.

So, I said, "Carol, hold off on the demonstration for a few minutes, because I want to go home and grab my camera and bring y'all a tub of that delicious Mexican Hot Chocolate that we're so addicted to. I'll be right back."

As soon as I got home, I went straight to the Airstream and unlocked the padlock and went inside and removed a tub of our treasured, limited edition ice cream, from the freezer. 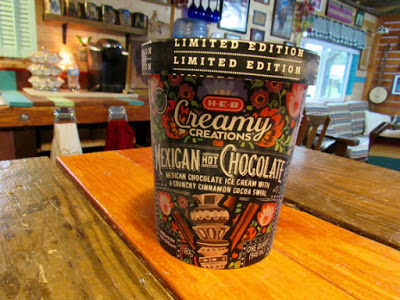 After locking up the Airstream, with precious cargo in the freezer, I went into the house—grabbed my camera, adios-ed our dogs again and then took off for Carol's ranch again.

After putting the precious, tub of ice cream into Carol's freezer and telling her and Bill how much they were going to love it I took these pictures of Carol doing her "spiralizer" demonstration. 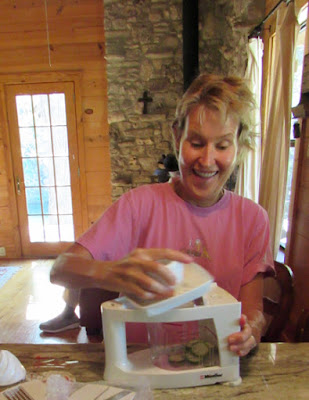 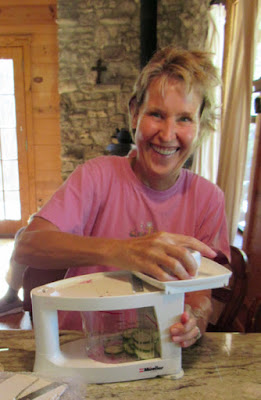 After her interesting food demonstration was done Carol put the vegetable spirals and mandolin sliced vegetables, on a cookie sheet, sprinkled them with olive oil and sea salt and then she shoved them into the 400 degree oven to roast. And omg, they were totally delicious and the four of us ate all of it.

Ten minutes later, as we were adios-ing our dear friends, Carol said, "We'll try the ice cream after we eat dinner...."

Well, I was nearly halfway writing this post this evening when the phone rang and Carlton's Caller ID showed it was Carol. "Hi Carol."

Then I heard her chuckle, and then heard her say, "Dang you, Tony and Steve Pietzsch! Omg, we love this ice cream! It has such a unique taste....I think we need to make Steve buy all of us stretch pants with elastic-waist bands, because it is his fault for introducing y'all to this one-of-a-kind ice cream." Then she and Bill started laughing.

"I'm so glad y'all love it, too," I said. "I want you to know that Tony and I are going to H-E-B early tomorrow morning, so we can buy more of this limited edition ice cream before they permanently run out...." And before Carol and I adios-ed each other, I said, "Please tell Bill that tomorrow morning I'm going to put some of this incredible ice cream in my coffee..."

And that is about it for tonight, except I want to show you this picture I took of our beautiful flowers by our front yard gate. 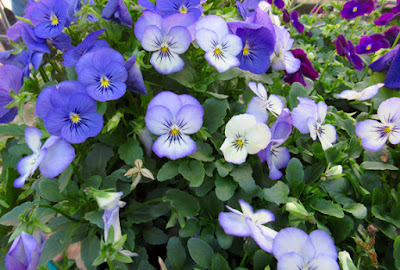 Y'all have a great evening and keep on laughing!
Posted by cousin nancy at 7:10 PM