Late yesterday afternoon, after I had reset all of our clocks, I jumped into Kermit and as I was going over to the Lodge to invite Brandon to come over, so we could play some music together. I found Brandon fishing. And ten minutes later he and I were sitting in Outer Space playing our guitars to some of my favorite songs on my iPod.

We played along with Eric Clapton, Keb' 'Mo, Neil Young, Willie, Waylon, the Allman Brothers, Lynrd Skynrd, Grateful Dead, the Knotting Hillbillies, J.J. Cale, Gary P. Nunn, Stephen Stills, etc. We were having so much fun time got away from us, because we ended up playing for over three hours and the only reason we had to quit was because our fingers were killing us.

On my way back home, after dropping Brandon off, I saw a silver car driving slowly past the corral, so I decided to go see who it was, because a lot of people get lost out here. As soon as I saw Kent Perkins smiling face I waved to him and then we stopped and visited for a few minutes. Before we adios-ed each other I invited him to come over, in the morning, for breakfast after Brandon and Tony returned from Medina. "Nancy, I would love to go to the Old Timer with Tony and Brandon and eat breakfast with y'all."

Last night I decided to go ahead and cook breakfast, so that all I would have to do this morning was heat it up. I decided to make an egg pie. So I sauteed onions, red and green bell peppers, spinach and garlic. Then I cooked a pound of H-E-B's "Hot" breakfast sausage. Then I mixed it all together and added eight eggs and cheese. Then I poured the mixture into a round casserole dish and baked it. Then before going to bed, while the egg pie baked in the oven, I watched one of my all time favorite movies, Electric Horseman, starring Robert Redford, Jane Fonda and Willie Nelson.

Today has been great. When I got up this morning the first thing I did was turn on the oven and put my crust less quiche inside it, so it would be warm enough by the time Tony and Brandon arrived. Then I drank a cup of Donut Shop Coffee, to help me wake up.

When Tony and Brandon arrived at 8:30, Tony said, "Kent went with us to the Old Timer and he and Kinky should be over here in about ten minutes." I then turned up the oven to make sure the quiche would be warmed enough. Then I grabbed the jar of hot sauce, from the fridge, that Carol had made for us, that was her father's secret salsa recipe and poured it into a bowl. Then Brandon and I grabbed my guitar and banjo and started playing some music.

Nine minutes later, Kinky and Kent arrived and as I was removing the delicious looking egg pie from the oven, I said, "Y'all are going to love this salsa that Carol made for us..." Tony cut the pie into fourths and then the men served themselves. (I didn't eat, because earlier I had a smoothie for my breakfast.)

Right after Kent and Kinky's first bite, they took turns raving about how delicious my egg pie was and how much they LOVED Carol's salsa. Tony and Brandon said nothing, because they were too busy eating.

After everyone had cleaned their plates I washed and dried them and then the four of us drank coffee and had a really fun visit inside The Cabin. Before it was time for them to go back over to the Lodge, Kent asked Kinky to sign Max Swafford's fabulous book The Kinky File to him and his adorable wife, Ruth Buzzi. After he had signed the book I snapped this picture of Mama and Roy giving away kisses. And that is about it for today. 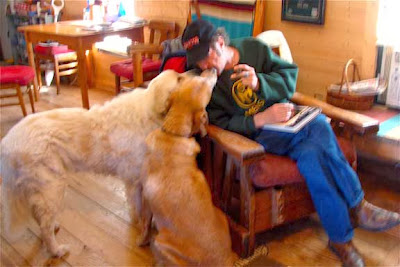 Y'all have a great evening!
Posted by cousin nancy at 7:06 PM