Today has been great even though Chad Stuart was returned to us early this morning, because he wanted to pull expensive cushions off of the chairs and decorate their backyard with them. The nice couple felt very bad about having to return him to us, but they didn't know what to do and neither did we know how to solve the problem.

Tony and I really liked the elderly couple, about my age and they still want to keep in touch with us, in hopes that they can adopt a dog, about five-years-old, who just wants to sit on their cushions, by the pool, instead of drowning them. And the good news is Chad was thrilled to come back home and be reunited with Jeremy, his best friend. Chad & Jeremy are planning to enjoy tonight's summer breeze.

After Brandon helped Tony with the morning chores outside, Tony and I declared today, July 4th, an important  holiday and that we were taking the rest of the day off to enjoy it. Then Brandon and I grabbed our guitars and Tony grabbed my banjo and we played music together for about twenty minutes, until Tony's fingers were killing him.

When Tony left the big room, to go back to his office, Brandon and I decided to keep on jamming and I had a blast, because he and I wrote and came up with the official The Cowgirl Sisterhood: Death In New Mexico theme song! Then we decided to write a blues tune that we've named, The Swamp Song and that's when Tony came back into the big room just to listen to us, because he loved what we were playing and so did we.

I've really improved my musical skills, because of pickin' and grinnin' with Brandon. Brandon and I played our guitars for over two hours, until my fingers were killing me. And that is about it for tonight.

I want to wish everyone a Happy 4th of July, and I want to show you the picture, that our friend Marguerite sent to me of Odi, the adorable, one eyed pup that she adopted from us last year. He and Enzo, the German Shepherd, that she also adopted from us are two of the luckiest dogs to have found her. 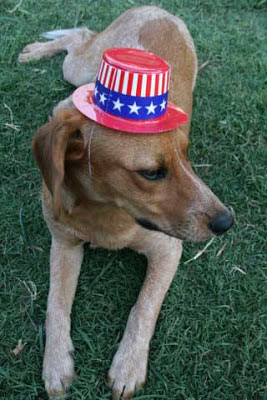