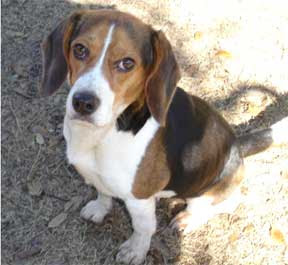 This afternoon around 1:20, a woman called the rescue ranch wanting to know if we still had Martha Stewart! Tony told her that we still had the cute little Beagle, and she told him that she was on her way out to meet Martha, and to possibly adopt her!

The woman arrived at the rescue ranch—thirty minutes later. As we walked down to Martha’s and Dobie Gillis’ pen, she told us that she had recently had to put Nigel, her fifteen year old Beagle down, and she was now ready to adopt another one.

When we arrived at Martha’s pen, we went inside, so Ann could meet Martha. Within a minute—they had fallen in love with each other! After the adoption forms were filled out, Tony attached our ranch tag and rabies tag to Martha’s new dog collar, and then put it on her. As soon as the leash was attached—Martha happily jumped into the backseat of Ann’s car!

As the two drove away, Tony said, “There goes one very happy Beagle.”

P.S. Today, I received a book Mari sent to me, ‘Dump him, Marry the Dog!’ and I love it! And, I also loved the horse book that she sent, too! Nomads come see us!
Posted by cousin nancy at 7:22 PM