Today has been great and so was last night, because I this incredibly great Netflix Special—Springsteen On Broadway.

Omg, it was so good I went to bed last night thinking about it and it still has me thinking about it, so I plan to re-watch it again tonight. Seriously, I cannot say enough about how much I love Springsteen On Broadway and if you decide to give it a try I promise that you'll be hooked within the first couple of minutes and you will not want to miss one second of his performance.

Early this morning after doing my new habit, "Today is going to be a great day!" I had a little surprise waiting for me in the kitchen, that would test if my new habit actually works.

Okay, let me set the stage for you. I was in the kitchen finishing off my first cup of coffee and I decided that I should wrap Tony's and my Secret Santa gifts that we were giving to Tessa and Sarah, because the Escondida Christmas party that we were going to started at 10:30 this morning.

(Note: Last week Tony and I shopped and we purchased our dear friend's gifts along with a roll of wrapping paper, because I had no wrapping paper to speak of. It was my idea to get their gifts early, so we would not have to do any last minute shopping. )

To set the Christmas mood this morning, for my gift wrapping task, I chose this fabulous Christmas channel on Pandora, that Carol had told me about, because it plays classic Christmas songs sung by Bing Crosby, Dean Martin, Burl Ives, Nat King Cole etc.

As Dean Martin was singing Winter Wonderland and Henry was barking at something outside, I had the Christmas spirit and I was ready to wrap the presents, on the kitchen island.

When I opened the roll of wrapping paper (that was on sale, which should have been a clue) my heart sank, because the wrapping paper was clear and you could see right through it. 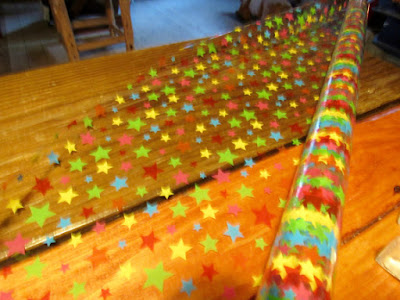 So I am thinking, well never mind I'm not going to tell you what I was really thinking, because there were cuss words involved. And let's just say that I was well aware that I was not having a great day as I had expected. But I was determined to turn it around. You know, like when you get lemons you make lemonade. 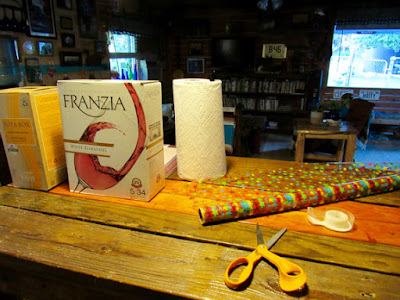 And ten minutes later—our friend's boxes of fine wine gifts were wrapped or better said—camouflaged and they were ready to be delivered. 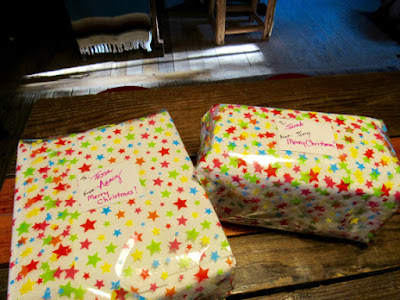 The Secret Santa Christmas party was so much fun, because Tony and I truly love everyone that works at Bob & Kelli Phillips' famous Escondida resort. I took this picture of everyone before the party started in one of the beautiful sitting rooms, so you can see why we love these great people so much.

Our friends were all in the Christmas spirit and everyone seemed to love their gifts. And since it was a morning Christmas party Sarah served us some delicious Martinelli apple cider and grape juice and an assortment of tasty pastries. 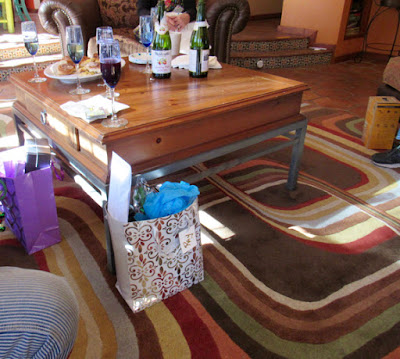 And Sarah and Tessa thought that my creative (emergency) wrapped paper towels covered by gift wrapping paper was hilarious, even though they instantly knew that they were getting boxed wines from us. And to say the least, it was one of the best Christmas parties that we've ever attended and that made my great, again. So, I want to say, "Thank you Bob & Kelli, Sarah, Darlene, Duane, Ray, Lisa, Rick and Tessa! Merry Christmas!"

When the super fun festivities ended Tony and I were walking to the truck when Tony stopped, and said, "Wait a minute. I need to get a picture of you since you took all of the pictures..." So Tony grabbed my camera and he took this picture of me dressed in my cowgirl outfit. 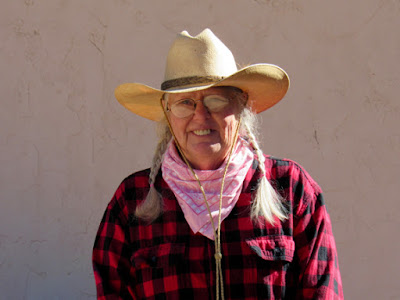 And the only reason that I am showing my picture to you is because Tony kept his promise and he shot me from the chest up, so you couldn't see my muffin(s) top(s). 🙆

Y'all have a great evening and keep on laughing! And today has been great!
Posted by cousin nancy at 5:07 PM