Last night we had some thunderstorms and some were mixed with pea-sized hail and Big Al(ice) was not a happy camper, even though forty minutes before the light show, thundering and pounding started I had already put her thunder-jacket on her and given her a tiny doggie-downer. But the good news is she was much calmer.

While the storms tried unsuccessfully to do harm outside, I was already ahead of the game with my damage control plan. I had everything unplugged, of course, and I had my music cranked up really
loud to block out the thunder strikes.

About thirty minutes into the noisy storm, my legs went to sleep, because I had Henry Standing Bear sitting on my lap—licking my fact non-stop while I was holding Little Debbie in one arm and Big Al(ice) in my other arm.

During a lull of lightning and thunder I forcibly removed Henry from my newly flattened legs and lap and then I put The Girls back on my chair seat and covered them up with a doggie blanket. Then I pulled out a drawer, in the kitchen, to search for some emergency batteries for my battery-operated candles, just in case we lost power.

And to my delight—I found the batteries and I also found another one of those super-cool, motion-activated toilet bowl lights, as seen on TV! I guess I had purchased it for back-up. 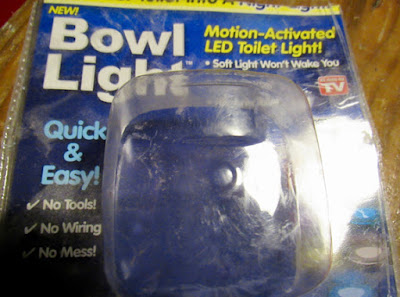 Anyway, while Henry stayed glued to my leg, I put new batteries in my candles and carefully re-read the instructions on how to operate the bowl light.

I knew that Tony would be thrilled at my bowl light discovery, because our last one wore out or broke over a year ago, during our monster move. Bottom   Line: Tony was pleasantly surprised when I asked him to pause the TV show he was watching and to please go into the bathroom without turning on any lights.

Today has been great. This morning Tony and I worked for a few hours next door, at Escondida and then we did a few chores and then we went to Kerrville.

We were busy in Kerrville. We went to the Kerrville dump and dropped off a load, then we went to the laundromat to wash one load of clothes. And while the clothes were becoming cleaner by the minute we went to the big H-E-B and bought gas and groceries.

Our last stop, while our cleaned clothes dried was at Wolfmueller's Books, so we could visit with Sandy and Jon. Unfortunately, Sandy was gone, but we still had a fun visit with Jon, when he wasn't busy helping customers find books.

When we got back home, after hanging up the clothes and putting them away and putting up the groceries—I made a loaf of bread and for the first time in my life—it was absolutely delicious and it looked like a loaf of bread—instead of a brick. And here's a picture of it, before we started consuming it. 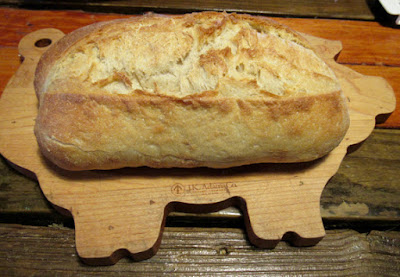 Tony loved my loaf of bread and he was shocked that I had actually baked it and so was I. And it was hilarious when he cautiously took his first bite of bread, because my past history of bread making has always been disastrous.

And as I finish writing this tonight, because I am not a liar—I have to confess that I did bake that loaf of bread for twenty minutes, but other than that I had absolutely nothing to do with it and that's why it turned out so good.

So there. I admit I did not make this delicious loaf of bread. It is Central Market's Country Loaf, that I bought today at H-E-B.

But I am not going to tell Tony about it, because he wants me to start making it often. And the way I see it—what he doesn't know he doesn't need to know. If that makes any sense to you. 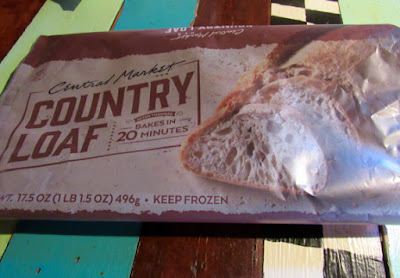 Y'all have a great evening and keep on laughing!
Posted by cousin nancy at 6:08 PM