It's About Time! or Free! or Time Will Tell!

Today and the past few days have been great. I apologize for skipping a few days and not posting anything. My excuse is we've been busy working and I've spent most of my spare time writing, because I am determined to finish this 3rd novella by October.

First off, I want to brag about me winning the first week of our steps competition! Darlene, Sarah and Tony were good sports about me "walking circles around them" or better said—walking in circles inside The Cabin.

The past few days since I've been doing so much writing I am definitely lagging behind in my steps compared to my competitors, but I am actually fine with it. Because I've been enjoying sitting in my chair with Little Debbie and Big Al(ice), on my lap, instead of pacing around the house drinking my 2 glasses of cheap boxed wine.

This morning I got up around 5:00 and when I went into the kitchen/big room our atomic wall clock said it was 10:00?

All of the other clock functions were working, but for some strange reason the clock was 5 hours fast.

This afternoon the inaccurate atomic clock was driving me crazy, because it was 5 hours fast, so I decided to fix it.

The first thing I did was replace the old batteries with new batteries. But when I tried to reset the clock—nothing seemed to work. I would press the buttons in the correct order to reset it, but it did not respond.

Long story short—after spending/wasting 1 hours of my time, reading the manual, watching YouTube videos, etc. I decided to give up. In fact, I was so frustrated with the dang thing I was thinking about chunking it into the trash can.

But when I checked out the new higher prices to replace my beloved atomic clock, I decided to pause and take 10 deep breaths and rethink it. And I am so glad that I did even though it was a little bit scary, because Tony was next door helping Sarah and Darlene move a big fireplace. (And yes, I said fireplace.)

Anyway, I decided to press and hold the Atomic Clock button, on the back of the clock. A little wi-fi icon appeared and it started blinking. 📶—it was in search mode to find the world's atomic clock, which I guess is in Outer Space, on a satellite.

I decided to leave it on the kitchen island and started answering some e-mails. About five minutes passed and I got up to see if the icon was still blinking. It was.

As I started back to my desk, I heard the strangest noise. It was like something was inside my atomic clock and it was trying to get out. In fact, I put my hand on the top of the clock and the clock was vibrating.

It was unbelievable and then it quit vibrating and making the oddest sounds. But when I looked at this amazing atomic clock, Made In China, the time and dates were rapidly changing. Of course since Tony wasn't here I thought "Great. No one is going to believe this happened...Where is Tony when I need him?"

Then once again as I started back to my desk—the clock started making weird sounds and vibrating. So I looked at my atomic clock and wondered if it was possessed by an evil spirit or a restless soul that was trapped inside it and wanted to be set free.

As it continued vibrating I listened closely to see if I could hear little voices or something coming from inside it, as I was looking on top of the refrigerator for my sage, because I wanted to smudge my atomic clock and to set whatever was inside it free.

With a small amount of sage in the bottom of a cereal bowl, I started to get matches, but when I looked at the clock—the time and date, etc. were correct and it was no longer vibrating and making strange sounds. So, I was thrilled to say the least.

So I took my atomic clock and hung it back on the wall and then I took this picture of it showing the correct time, temperature, date, etc. Life was once again good and as it should be. 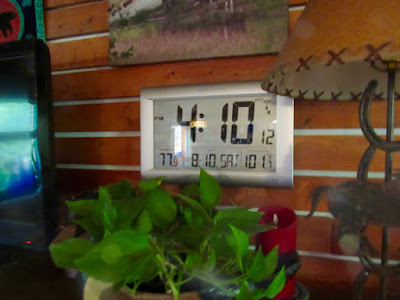 And of course it was perfect timing, because right after I took this picture Tony walked inside The Cabin—the fireplace had been successfully moved.

As I finish writing this I have not told Tony about the possessed atomic clock, because I am sure that he won't believe me or else he will think that I am totally crazy. But time will tell.

Y'all have a great evening and keep on laughing!
Posted by cousin nancy at 5:22 PM

Hi Kris! It is good to hear from you! And yes, I am positive it was the poltergeist. I can't believe that it found us, again. But like "they always say—Time Will Tell."

I vote that we do lunch as soon as possible. So please set the date.